Organic grain producers have been relying on mechanical cultivation to manage weeds, using row cultivators between rows and rotary hoes or harrows over the rows. However, frequent soil cultivation weakens soil health [1]; brings buried weed seeds to the soil surface where they are more likely to germinate and compete with crop plants, potentially reducing yields and growers’ profits. Organic grain growers are becoming interested in improving soil health by reducing tillage frequency and covering the soil surface with cover crops over the winter season.

Using cover crops along with reduced or no-tillage improves soil health and profitability. This can be achieved by the integration cover crops and roller-crimper technology [2]. 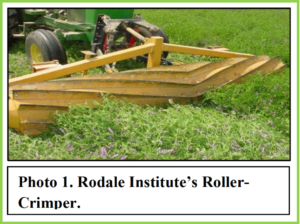 The role of the roller-crimper (Photo 1) is to roll and crimp the standing cover crop forming a soil covering mulch.

This approach has many advantages:

Legume cover crops, such as hairy vetch (Vicia villosa Roth) and Austrian winter pea, provide nitrogen (N) to cash crops though rarely provide sufficient N for high N demanding crops such as corn. Cereal cover crop mulches such as rye (Secale cereale L.) can have the opposite effect by immobilizing N and have a longer impact on soil moisture and weed dynamics. Physical [6] rather than allelopathic [7] influences from cereal rye residue have been shown to inhibit weed germination and growth processes of many plant species especially because the active phytotoxic compounds may not be present in soil more than 2 weeks after rye termination [8].

A dense uniform cover crop is needed to create a soil covering mulch that enhances suppression of weeds. For effective suppression of annual weeds, research has shown that there must be at least 8,000 kg ha-1 of rye aboveground dry biomass to create a mulch of at least 10 cm deep at time of rolling [9].

Planting a mixture of legumes and grass cover crops (Photo 2) will provide a fast growing, dense ground cover and thicker residue mulch upon rolling (Photo 3). Cover crop biomass can be manipulated mainly with seeding rate and time of planting. Early planting of cover crops in September rather than later in October (in the Northeast) provides enough biomass to cover soil surface and establishment of good root biomass before soil freezes in the winter. In spring, cover crop mixtures such as cereal rye with hairy vetch continue to grow and increase in biomass. Residue of rolled cover crop mixtures that include hairy vetch and cereal rye supply N and decompose at a slower rate than when the biomass is tilled into the soil in a corn production system. Such a cover crop mixture can yield above ground biomass production of between 8,922 to 10,706 lb/acre (10,000 to 12,000 kg per hectare). 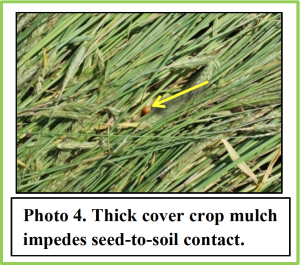 Jeff Moyer modified a Monosem® corn planter and included the Pequea turbo disc soil slicers and 130 pounds of added weight per row unit to cut through the rolled cover crop.

Despite many successes in rolling leguminous cover crops at Rodale Institute, planting no- or reduced-till corn into dense cover crop residue that includes cereal–legume cover crop mixtures can be challenging. A thick layer of plant residue on the soil surface may impede planter performance and seed-to-soil contact (Photo 4), reduce corn plant population and consequently yield.

To overcome this problem, Mr. Moyer included residue slicers in the front to ensure cutting through the dense cover crop residue before drilling in corn seeds (Photo 5). 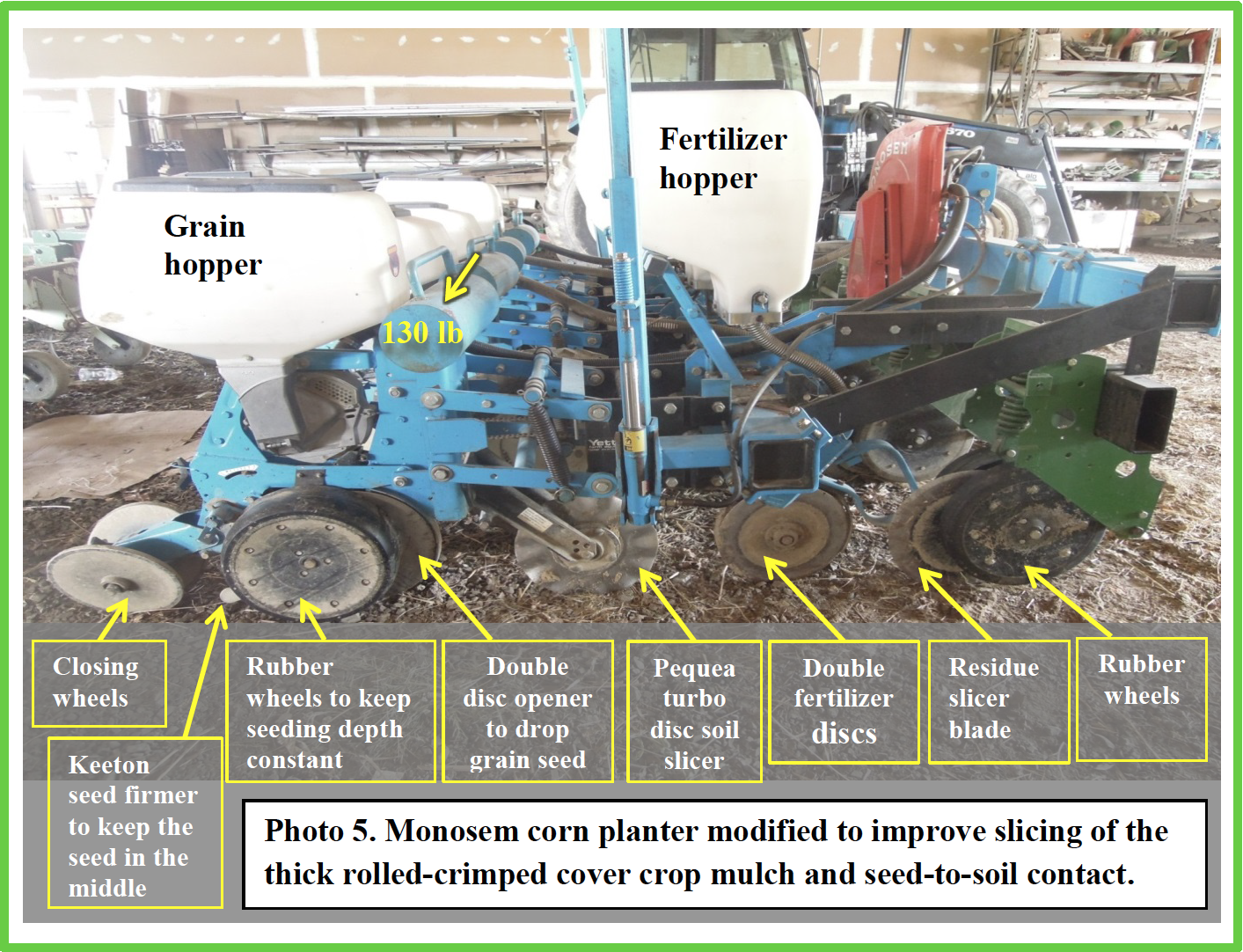 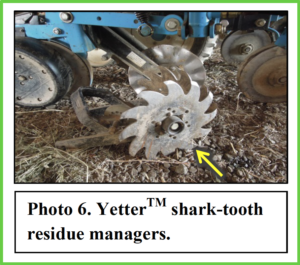 The residue slicer is compatible with John Deere 7000-7200-1750 planters. The combination of down spring pressure, a straight blade, and the rubber wheels to hold the thick residue will make a clean cut. 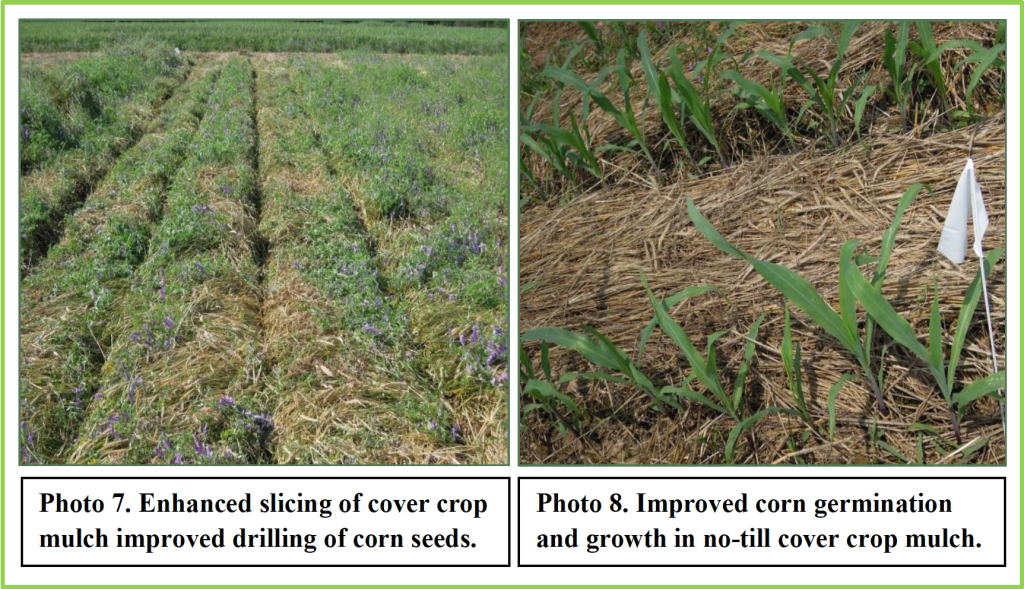 In organic systems, grain growers are interested in adopting reduced- or no-till practices to improve crop and soil productivity. For successful weed suppression, a dense uniform cover crop biomass is needed. Planting corn grain into thick cover crop mulch can be challenging. These challenges can be overcome by using proper equipment.

In this article we highlighted the challenges and the modifications made to Monosem® corn planter. By integrating the roller crimper, residue slicers, Pequea slicers, and YetterTM shark-teeth to the corn planter, we were successful in rolling-crimping and slicing through the dense layer of mulch and consequently increasing corn establishment and improving weed management throughout the growing season without tillage.

This system also allowed us to plant corn and fertilize with pelleted chicken manure in one pass rather than running several passes with machinery over soil surface in order to conduct these operations.

In the long-term, applying these practices would improve soil carbon sequestration, water and nutrient plant use efficiency, reduce fuel and labor costs, and consequently increase yields and profitability.