Recently, interest has increased in identifying indicators appropriate for describing soil health changes. Current research suggests that soil organic carbon (SOC), total nitrogen (TN), and labile or active fraction of SOM, known as POX-C, has also been used as a sensitive indicator of management effects on soil health where agronomic crops are grown. However, identifying soil health indicators where annual vegetable crops are grown have not been studied. It will be interesting to study how cropping systems and management practices can impact soil health, by building or decreasing soil carbon content and the impact of the latter on soil physical, chemical, and biological properties, and crop productivity over time.

With that in mind, The Vegetable Systems Trial (VST) was established at Rodale Institute over 2.6 acres in 2016, with the expectation that it would be a long-term trial comparing side by side the impact of cropping systems and management practices on soil and crop health. The site was managed organically for over 20 years before the establishment of the VST. The organic system (ORG) includes cover crops (hairy vetch with cereal rye), organic amendments, and management of pests organically when needed. The conventional system (CNV), on the other hand, includes cereal rye as a cover crop and uses conventional herbicides (e.g. glyphosate) to burn down the cover crop and weeds, as well as synthetic fertilizers and pesticides. In both systems, tillage with black plastic (BP) and reduced tillage (RT) are used as management practices for growing vegetables. Five major vegetables are grown in the trial every year, representing tuber, fruit, and leaf. These include potato, snap beans, winter squash, sweet corn, and lettuce. These crops are grown in rotation in both cropping systems.

One goal of this trial is to monitor and assess the changes in soil health indicators over a long period of time, due to the cropping systems and management practices, to provide the vegetable growers with scientific-based information that allow them to make informed decisions to enhance soil health and improve crop productivity on their farms. A second goal is to link soil health to crop health and consequently to human health.

To address the first goal, every fall, the BP plots are managed by tilling the soil with moldboard plow and seeding cover crops, such as hairy vetch and cereal rye in the ORG system, and cereal rye in the CNV. Subsequently, each spring, the soil is tilled again with a moldboard plow and the cover crop biomass is incorporated into soil prior to laying plastic mulch. In comparison, in the RT plots, a chisel plow (a less aggressive implement) is used to prepare the soil for seeding the cover crop in the fall and roller crimping the cover crop biomass with a roller crimper in spring prior to transplanting the vegetable into ORG system. In the conventional system, the seedlings are transplanted directly after the cover crop biomass has been burnt down with an herbicide like glyphosate, and without rolling crimping.

In fall 2020, deep soil cores were collected from three soil depths: 0-10 cm, 10-20 cm, and 20-30 cm. These were collected to assess physical, chemical, and biological properties of the soil. In this article, results on the percentage of soil organic carbon (SOC) and the labile soil organic carbon (POX-C) concentration, in plots where winter squash was grown under ORG and CNV systems and managed either with tillage or reduced tillage, are reported.

SOC is a major indictor of soil health and an important component of a soil ecosystem. The presence of organic carbon in soil is a key determinate of soil productivity and a key influencer on physical, chemical, and biological properties. The soil organic carbon exhibits the long-term balance between additions of organic carbon from different sources and its losses through different pathways. Short and medium-term SOC changes in response to management practices are difficult to detect, however, the more labile (active) constituents of SOC fractions are often early indictors of management impacts on soil health. The labile fractions are characterized by the organic material available to soil microbes and in transition between fresh plant residues and stabilized organic matter. The POX-C is considered a useful parameter of soil labile carbon and a sensitive indictor of cropping systems and management practices.

Percent soil organic carbon was slightly greater in the ORG system (averaging 2.28%) when compared to that of the CNV (averaging 1.98%), however, these levels were not statistically different. The SOC was greater in RT plots at 0-10 and 10-20 cm soil depth than those in BP and was 70% lower at 20-30, as shown in Figure 1. 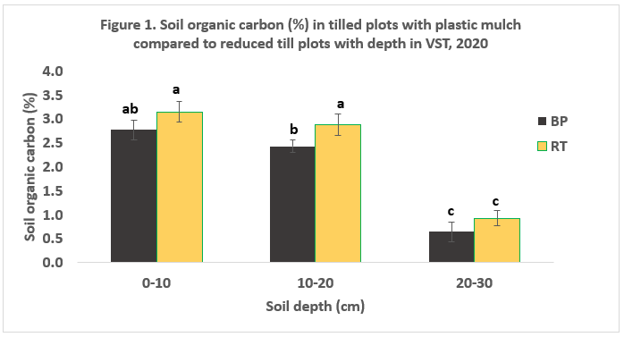 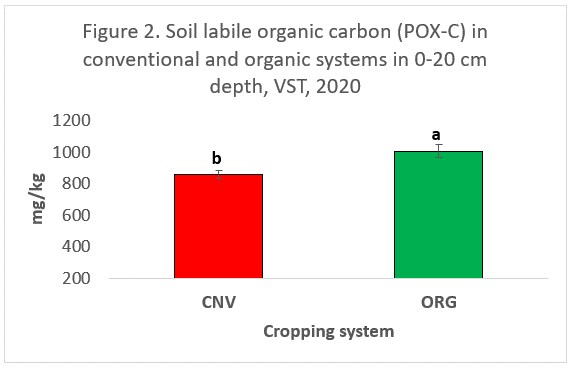 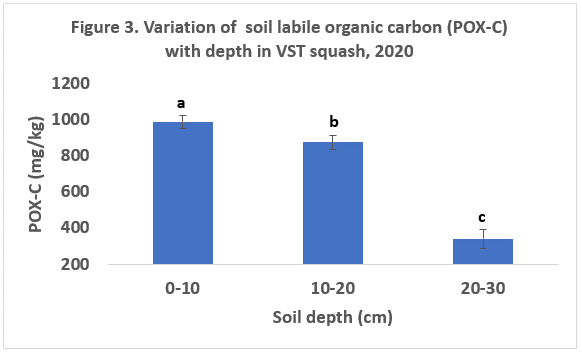 In short, the results presented here from this trial showed: