by Mark Schonbeck and Ron Morse

In no-till cover crop systems, the known benefits of cover crops are maximized by allowing them to grow until shortly before planting the vegetable or other cash crop, and by managing the cover crop without tillage. The best cover crops for this purpose have the following characteristics:

Often, a combination of a grass and a legume is used, since this enhances biomass production and therefore mulch thickness, weed suppression and organic matter inputs. The combination also offers a balanced carbon to nitrogen (C:N) ratio, which gives a gradual release of plant available N, in contrast to the N-immobilization (tie-up) by an all-grass cover, or the rapid N release and potential leaching losses from an all-legume cover. The higher diversity of a two-species cover crop can also enhance allelopathy (suppression of weeds by natural chemical substances from the mulch), diversity of beneficial soil microbes, and nutrient effects. For instance, legumes tend to enhance availability of phosphorus (P), while grasses, especially rye, enhance availability of potassium (K).

The most widely-known and extensively researched organic no-till systems are those based on hardy winter annual cover crops, mostly combinations of cereal grain rye (or winter rye), hairy vetch, crimson clover and Austrian winter peas. These crops are planted in early fall, and mowed or rolled after they flower the following spring, usually in May. Summer vegetables like squash, cucumber, pepper, tomato, eggplant, okra, sweet corn, beans, or (in cooler regions) mid-season brassicas, are then transplanted or direct-seeded no-till into the cover crop mulch.

In recent years, growers and researchers have begun experimenting with a much wider range of annual cover crop species for no-till vegetables planted at other seasons. Other cool-season annuals like oats and fava beans can be planted in early spring, then killed in mid summer for late plantings of cucumber, bean or summer squash. Summer annual (frost-tender) cover crops like millets, cowpeas or soybeans can be planted after the spring frost date, then knocked down at the end of summer to plant fall brassicas or other fall crops. Finally, cover crops that are not winter-hardy in a given location can be planted in mid to late summer and allowed to winterkill, forming a mulch for no-till spring vegetables.

One of the basic tenets of sustainable agriculture is that greater diversity yields greater agro-ecosystem stability, more beneficial organisms, fewer pests and diseases, more sustained crop yields, and more opportunities for farmer innovation. We feel that this is true also of cover crops, and one of the objectives of ongoing research is to develop a larger cover crop “toolbox” from which growers can select cover crops most suited to their regions and production systems. The following table gives some basic information on a number of cover crops, some tried-and-true, and some less-known experimental species. The table is organized into legumes and non-legumes, listed in order of cold-hardiness. The table is intended not as a cover crop prescription for organic no-till vegetables, but as an information resource for farmers and other experimenters to use in selecting cover crop combinations for their specific vegetable crop rotations and cropping systems. 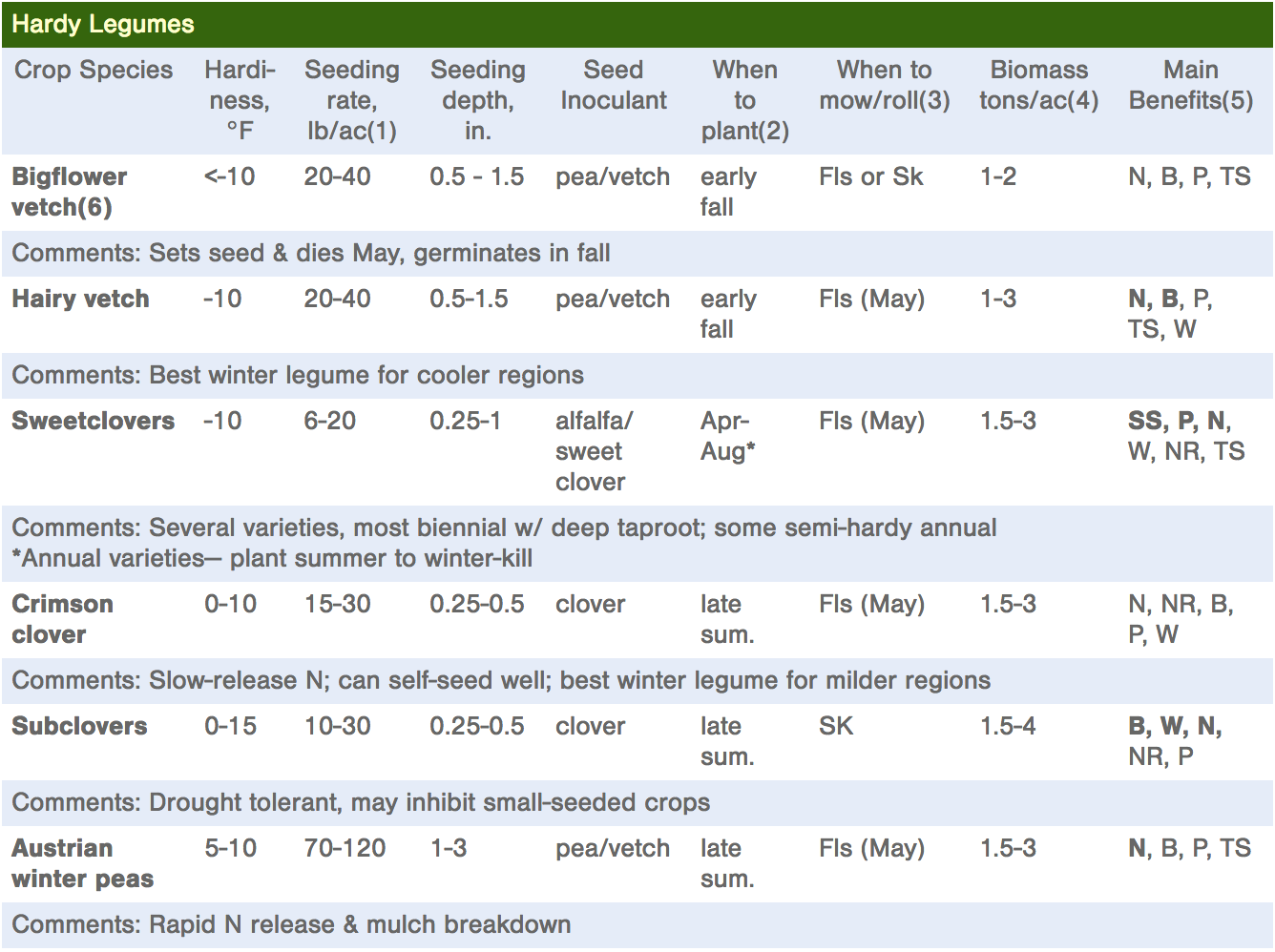 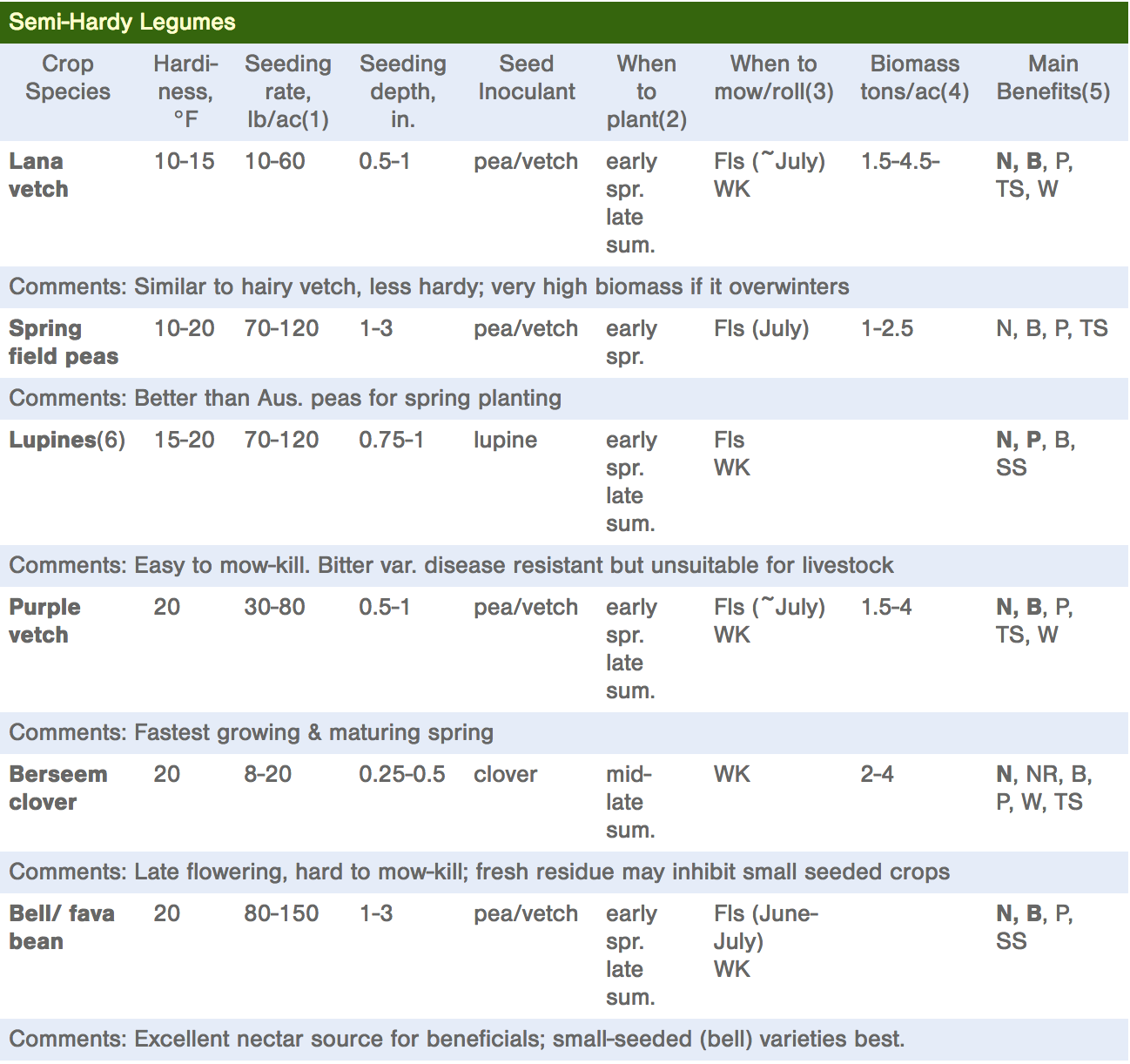 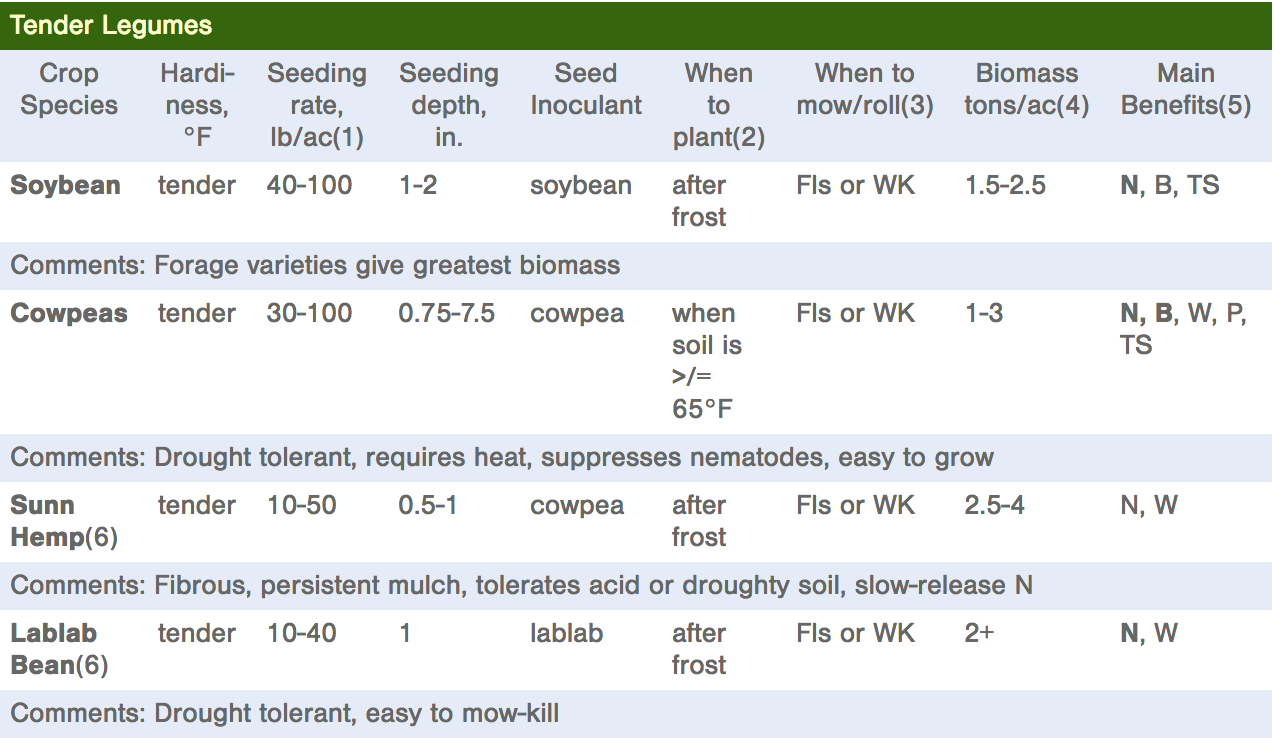 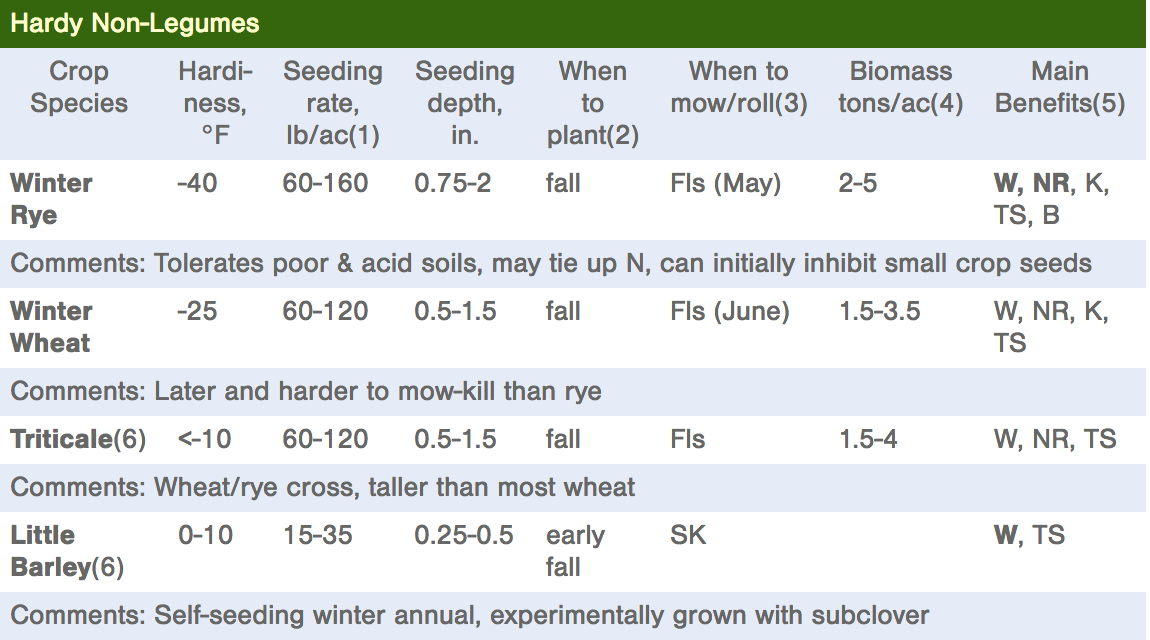