In 2017, Rodale Institute initiated a four-year trial studying the effects of industrial hemp on soil health and weed suppression. The project has just concluded its second year. Below is an overview of the research and initial findings.

Our four-year industrial hemp research project has two field components: a variety trial and a weed suppression trial. It includes one greenhouse study, a weed seed bank study. Our goal is to evaluate the growth performance of hemp varieties under organic management practices in Southeastern Pennsylvania.

More specifically, we are evaluating hemp’s ability to compete with yellow foxtail (Setaria pumila) and red root pigweed (Amaranthus retroflexus). Other areas of investigation include the success of no-till cover crop establishment yields for corn and soybean when these crops follow hemp in a rotation.

Our goal is to provide farmers interested in growing hemp with research-based information on growth performance, weed and nutrient management, and how to integrate hemp into their crop rotation.

This trial is ongoing and will end in 2020. The site was previously infested with naturally high densities of yellow foxtail (Setaria pumila) and red root pigweed (Amaranthus retroflexus).

The study design is a completely randomized design with four replicates of each plot. The crop rotation is listed in Table 1 and is organically managed as either a rotational no-till system or tilled system.

We established a cereal rye cover crop in 2017 after terminating hemp and other cover crops. Half of the plots were plowed, disked and packed before planting the rye. In the other half, rye was no-till drilled into a hemp or Sudan-grass stubble. In all plots in spring 2018, we no-till planted soybean in a rolled/crimped rye cover crop mulch (Table 1).

Starting March 2017, a variety trial was established with a randomized complete block design. Each main block included three Cannabis sativa varieties randomly located within the block. We are analyzing the fiber, seed, and oil content in the three varieties. The variety trial will continue in year 3 with hemp. In year 4 the plots will be planted to corn. The crop rotation is listed in Table 1.

Plant height measures the shortest distance between the upper boundary of the main photosynthetic tissues, excluding inflorescences, on a plant and the ground level. These measurements were collected weekly in 2017 and 2018 as a measure of plant vigor, or the plant’s capacity for natural growth and survival.

Plant biomass measures the total mass of plant tissue in a given area. In both 2017 and 2018, these samples were collected 30 and 60 days after planting, weighed, dried at 100°F, weighed again, ground to 1 mm, and analyzed for a total of nineteen different minerals, including carbon and nitrogen.

We calculated the following weed densities during the 2017 growing season of hemp/sorghum. ‘Santhica 27’ hemp variety and sorghum Sudan grass suppressed most of the weeds sampled better than the control. Hemp suppressed foxtail and ragweed, both major agricultural nuisances, better than Sudan grass, even though the differences were not statistically significant.

Figures 3 and 4 show weed densities calculated during the 2018 growing season of soybeans. Plots where the cover crop (rye) was no-till planted had overall higher densities of weeds, however weed densities in hemp research plots in general were observed to be much lower compared to other soybean fields on the farm.

This suggests that the presence of hemp as a summer cover/cash crop and its earlier harvest/termination date not only suppressed weeds season-long but provided a wider window for establishing the winter cover crop. This is a key advantage of including hemp in organic rotations that could be profitably exploited by organic grain growers.

Foxtail was higher in the plots where the cover crop (rye) was tilled before planting. Smartweed, an aquatic plant in Pennsylvania, was very abundant this year, but only affected the no-till rye/soybean plots, making combine harvesting difficult in those plots. 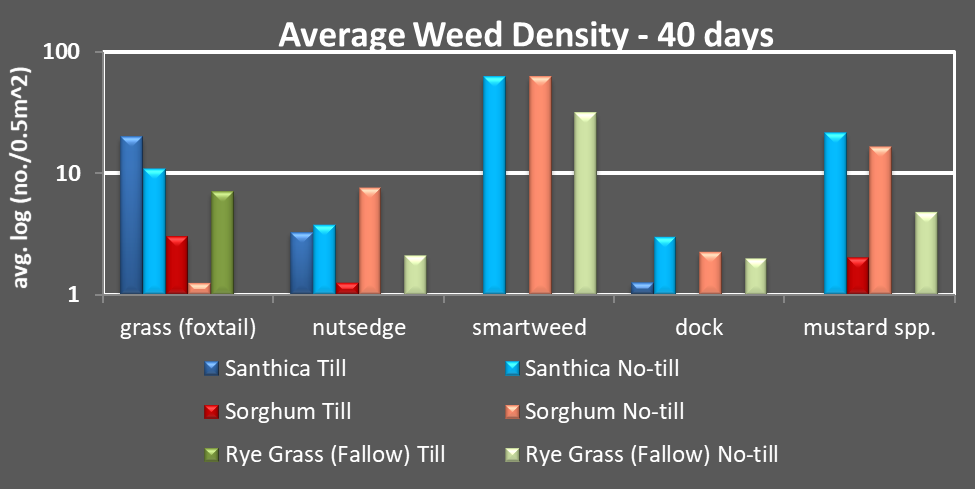 Fiber yield (Figure 5) was determined from three methods of separating the bast fiber from the hurd (stalk). 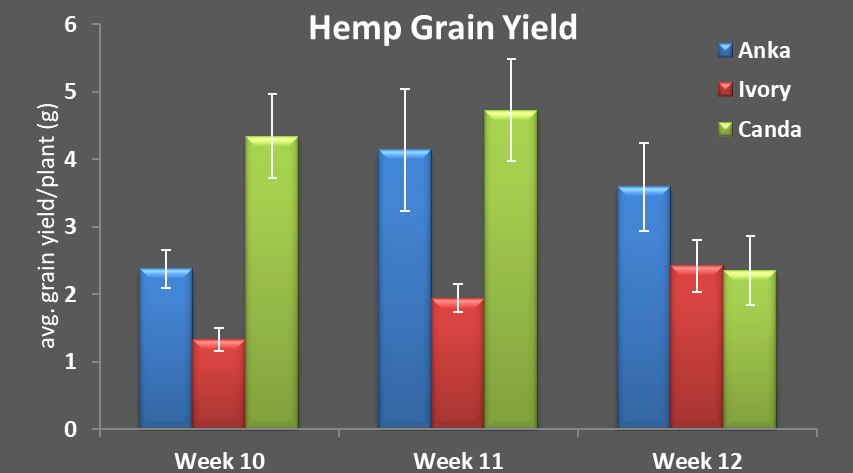 Effects on the Rotation

Soybean yields were highest in plots where a rye cover crop was established through tillage, but those yields were not statistically different from yields in plots where the cover crop was established by no-till drilling it into a hemp and sorghum Sudan grass stubble. Yields in the control plots (fallow) were lower than the yields in plots that had the hemp and Sudan grass (Figure 7).

We experienced several key challenges during this second year. As in year one, sourcing quality seed from international sellers was an obstacle due to federal regulation at the time.

Additionally, acquiring hemp from international sources requires long-term storage that subjects seed to varying moisture and temperature conditions. This could have impacted the viability of some of the varieties we received. For example, ‘Santhica 27’ variety had over 85% germination rate in 2017 but less than 10% in 2018. This variety is rare and hard to source, so ‘Ivory’, obtained from another permit holder, was tried instead. However, it was planted two weeks later than the other two varieties due to the time it took for us obtain it after realizing poor viability of ‘Santhica 27’. After seeding ‘Ivory’, we had 3 weeks of no rain, impacting growth. Plant height was stunted and budding started early. In comparison to last year, weed suppression was reduced.

Here’s what we learned:

We recently secured funding from the Pennsylvania Department of Agriculture to establish an additional trial in 2019 titled “Evaluating Organic Nutrient Management Practices to Improve Industrial Hemp Yield and Quality.”

We’ll analyze the nutrient content and quality of oil-seed hemp varieties in response to different fertility regimens in an organic grain crop rotation. This will help us to determine the fertility regimen necessary to produce high quality hemp-seed oil and plant extracts that have high demand in a burgeoning market.