When I moved to the Pacific Northwest eight years ago to start a market farm, it was my first experience growing food on a large scale. My focus was on planting organic crops and finding enough customers to eat them. It took only a couple of years to add a new farm priority: managing the area’s extreme weather challenges.

Northwestern weather patterns were different from what I’d been led to expect when planning my move from southern California. Our northerly location meant we had more than 15 hours of sunlight a day in midsummer. I watched the summer sun cook the soil during long periods of drought. When it finally did rain it was torrential. The water pooled on the hard packed dirt, just sitting there.

The crops, which I grew with two other farmers, suffered. Our yield was much lower than we’d expected. I began experiencing a kind of low-level anxiety that made it hard to get a good night’s sleep, and be cheerful with customers. At its worst I considered whether it made sense to continue farming.

My favorite daily ritual became walking through the farm as the sun set and feeling the rich, spongy soil give beneath my boots.

Rather than give up on growing food, I decided to head back to school in search of answers. It was there, while studying soil and water management, that I learned soil, if treated right, can help buffer plants from the effects of extreme weather and global warming.

The first thing I did when I returned to the farm was spread a thick layer of compost everywhere, and then add a dressing of grass clippings and shredded dry leaves, my go-to mulch. It’s a routine I’ve followed every year since. I planted deep-rooted perennials, like fruit trees and berry bushes, to give bacteria, fungi, worms, and other soil-nourishing organisms a place to gather and multiply. I also grew cover crops, like clover and winter rye, as a living mulch to anchor the soil and protect it from washing away.

Within two years I had the kind of soil a farmer dreams of – dark, loamy, and moist enough to clump when I grabbed a handful. When it rained the water sank deep into the ground. The soil’s improved ability to conserve moisture made it easier for my plants to withstand drought. My favorite daily ritual became walking through the farm as the sun set and feeling the rich, spongy soil give beneath my boots.

Here’s how you can win Acadia Tucker’s book >>

In the years since I started growing food I’ve begun referring to myself as a regenerative farmer. Everything I do on the farm is bent on regenerating and rebuilding soil. The practice has given me more resilient plants, though it certainly doesn’t hurt that many are sturdy perennials. It also allows me to be part of a solution to global warming. The soil I’m nourishing is acting, more and more, like a giant carbon sponge.

Plants are the ultimate and cheapest way to suck excess carbon dioxide out of the air. Almost all atmospheric carbon passes through plants during photosynthesis, the process that turns carbon, sunlight, and water into sugars and carbohydrates. Plant roots release some of the carbon-rich sugars to feed organisms in the soil. In exchange, they make nutrients in the soil available to the plant.

As plants die back each winter, they drop leaves and branches and even the roots die off. Over time this debris decomposes, adding even more nutrients and carbon to the soil. There’s evidence to suggest that when living soil organisms die they end up forming even more organic matter than plant residue.

The alliance between plants and soil organisms helps lock in carbon, producing dark organic matter called humus. Increasing the carbon stored in soil helps to maximize photosynthesis so plants can draw down even more carbon dioxide and trap it underground. 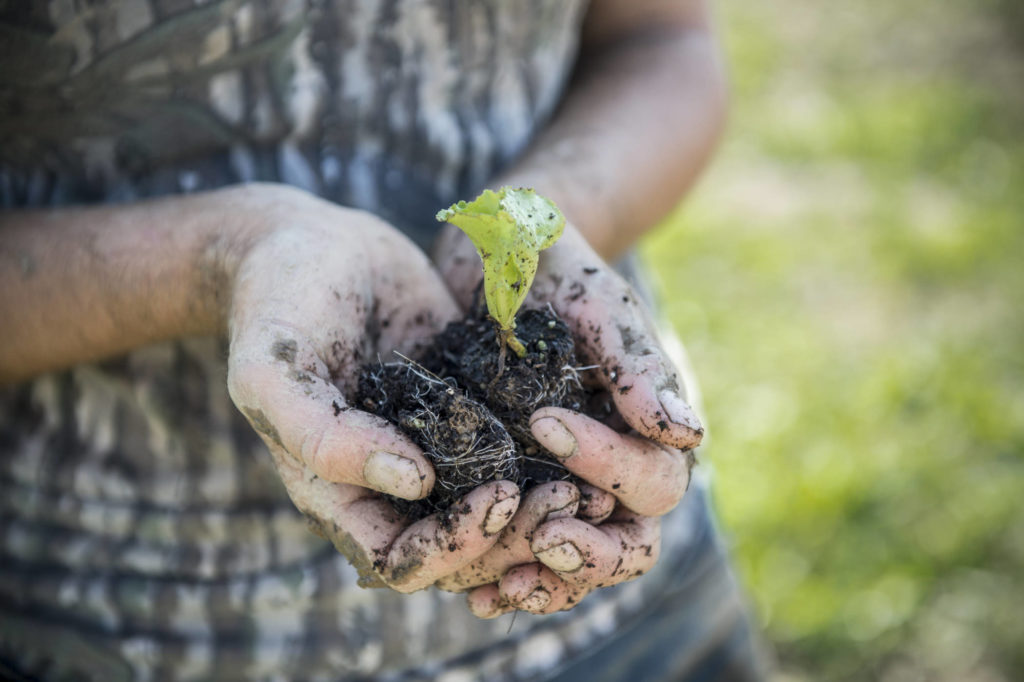 Moreover, soil rich in carbon feeds mycorrhizae, a vast network of fungi that releases glomalin. Glomalin is a sticky, gum-like substance that binds together particles of sand, silt, and clay, creating a soil structure that conserves moisture and holds onto nutrients. Plants raised in favorable conditions like this, with easy access to moisture and nutrients, grow sturdier and more resilient. This positive cycle is how nature works when we don’t interfere.

By adopting regenerative practices, farms could remove carbon dioxide from the atmosphere at a rate of about one ton of carbon dioxide for every acre, according to data reviewed by soil expert Eric Toensmeier. The potential benefits are enormous, as spelled out in a 2014 study from Rodale Institute. Citing data from farming systems and pasture trials, it concludes that we could sequester more than 100 percent of annual CO2 emissions worldwide if we start growing food this way.

Conventional farming does the opposite. Farming practices, like tilling and excessive chemical use, deplete the soil and release stored carbon back into the atmosphere, dramatically increasing greenhouse gas emissions. In 2011, farms emitted six billion tons of greenhouse gases. That’s about 13 percent of all greenhouse emissions worldwide, according to the World Resources Institute.

I started my own climate garden after moving from Washington State to New Hampshire to grow hops for local breweries. When I moved, I left behind a farm where we’d grown 200 different food crops. In New England, I so craved having fresh fruits, vegetables, and herbs within easy reach that I started my garden immediately.

The fact that carbon farming could help reverse global warming is both exciting and frustrating. We are, after all, dealing with an agricultural system that does not prioritize health, environmental, or climate concerns. But farmers aren’t the only ones who can opt for a regenerative approach. Many of us have our own patches of soil we can tend to—in yards, community gardens, even pots.

If you have access to even a sliver of land you can do something right now to battle the most significant ecological threat we’ve ever faced. Eric Toensmeier estimates that his own tiny carbon-rich backyard garden, about a tenth of an acre, can offset the carbon emissions of one American adult per year. Perennials are a great place to start because they’re easy to care for and stick around for years, making it easier for carbon-capturing organic matter to build up over time. Here are a few of my favorites.

Favorite Perennials to Use

Lavender is a member of the mint family and so robust it can grow almost anywhere. Plant it on sandy slopes or in the forgotten corner of the garden. Lavender is also drought-resistant, making it an especially hardy option for beginning gardeners.
Notable characteristic: Drought tolerance

Thyme needs very little water or attention. It comes in over 200 varieties so finding one that will thrive in your climate is easy. While not all varieties are fragrant enough for cooking, the delicate flowers can be relied on to attract pollinators to your garden.
Notable characteristic: Easy to grow

Currants are hardy shrubs that produces handfuls of sour berries in shades of deep purple, ruby-red, and golden white. Currants thrive for up to 15 years and are easy to grow.
Notable characteristic: Quick growing

Blueberries are packed with antioxidants and vitamins. They grow as a sprawling ground cover or an upright bush. The low-growing bushes are a challenge to grow and a pain to harvest. I’m partial to them because they remind me of my childhood in Maine, but I generally recommend planting a taller, highbush variety.
Notable characteristic: Thrives in acidic soil

Asparagus can be baked, boiled, grilled, or sauteéd and still retain its intense flavor. But its most amazing quality may be that while it takes time to become established, it can live for 30 to 50 years.
Notable characteristic: Longevity

Garlic is winter hardy, low-maintenance, and takes up very little space in a garden. An ancient bulbous vegetable, it grows from a single clove that multiplies in the ground. Most people grow it as an annual, but if you harvest only the big plants and leave behind the small ones, you’ll have a perennial garlic bed that regrows every year.
Notable characteristic: Long shelf life

Walking Onions “walk” across the garden thanks to tiny bulbs called topsets. These form at the tip of the leaves, making the plant bend over and fall. The fallen topsets then root and grow into mature plants the following season. The entire plant can be eaten, from the shallot-like roots to the topsets and hollow leaves.
Notable characteristic: Cool looking, and delicious when sauteed

Here’s how you can win Acadia Tucker’s book >> 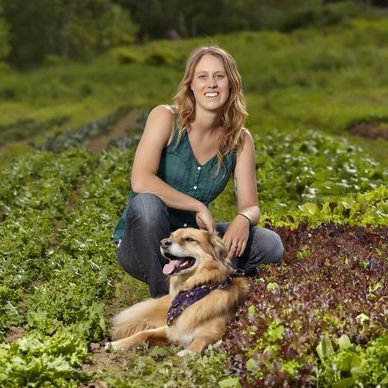 Acadia Tucker is a regenerative farmer, climate activist, and author. She has just published Growing Perennial Foods: A field guide to raising resilient herbs, fruits & vegetables. It’s a call to action to citizen gardeners everywhere, and lay the groundwork for planting an organic, regenerative garden. For her, this is gardening as if our future depends on it. Before becoming an author, Acadia started a four-season organic market garden in Washington State inspired by farming pioneers Eliot Coleman and Jean-Martin Fortier. While managing the farm, Acadia grew 200 different food crops before heading back to school at the University of British Columbia to complete a Masters in Land and Water Systems. She lives in Maine and New Hampshire with her farm dog, Nimbus, and grows hops to support locally sourced craft beer in New England, when she isn't raising perennials in her own backyard. She is also the author of Growing Good Food: A citizen’s guide to backyard carbon farming.