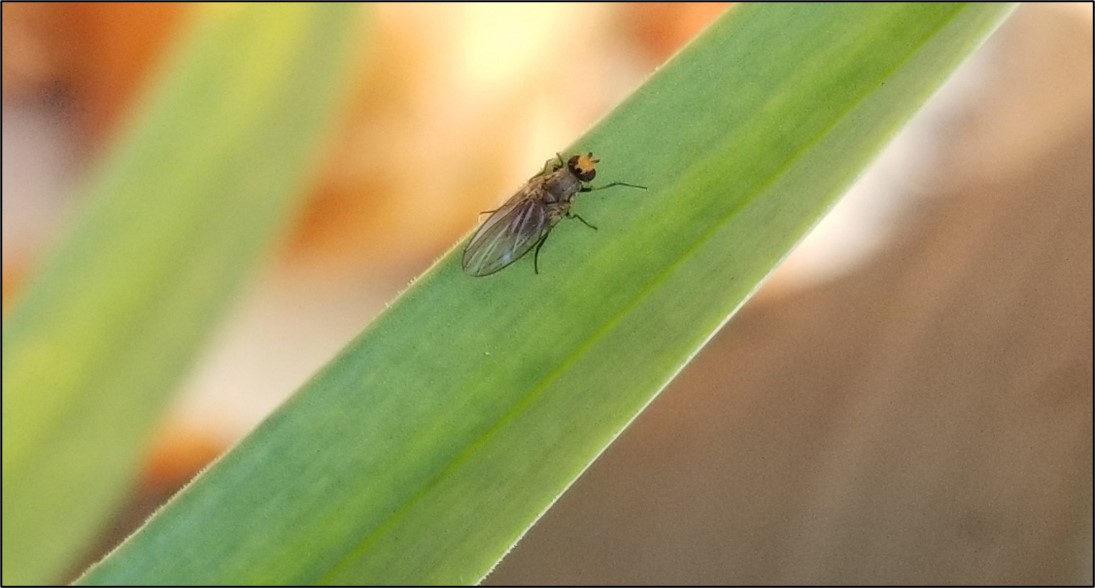 The Allium Leafminer (Phytomyza gymnostoma Loew, Diptera: Agromyzidae), an herbivore pest, was first reported in European countries such as Denmark, Sweden, Poland, and the Mediterranean Basin in 1976 and now is widespread in Europe. This invasive pest was first recorded on allium crop in Lancaster County, Pennsylvania (PA) in December 2015 and expanded to many other counties in PA and adjacent states (Fleischer, 2019) such as New Jersey, Maryland, New York, and Massachusetts in 2019. With climate change, this pest is expected to spread to other states in the Northeast, causing damage to allium cropping.

The ALM pest feeds on chives, onion, garlic, and leeks. In Pennsylvania, this pest has two generations. The first generation appears in March-April, where the adults emerge from overwintering and mate within 48 hours. The female ALM pest punctures holes and lays eggs into allium foliage between late March to early May and again in late August to mid-October in the Northeast. Generation times differ somewhat based on geographic location.

When eggs hatch, the larvae tunnel down the foliage from inside, feeding as they go and leaving tell-tale marks that are visible on the allium leaf surface.

The larvae pupate (as shown in the photo below) either in the bulb or in the soil until September/October in Pennsylvania, U.S.A., when the second generation of ALM adults emerge and attack the fall-planted allium crops. Refer to a web article by Zinati et al., 2020 to learn more about the pest description and life stages. The presence of larvae and pupae in green foliage and bulbs of chives, leeks, garlic, and onion bulbs can lead to tremendous yield losses and is of major concern for Pennsylvania specialty crop growers.

In Pennsylvania, sales of certified organic onion and garlic are $373,852 and $321,469, respectively. Unlike conventional growers, organic allium growers have limited options for registered organic pesticides to control or reduce the ALM pest impact.

All life stages of ALM have been shown to cause important economic impact in the above-mentioned states. The larvae mine the leaves, stalks, and bulbs of allium plants, causing these parts to become distorted in shape and susceptible to bacterial and fungal infections. In addition, the soil and allium debris left in the fields become a suitable habitat for overwintering ALM and give rise to adults in the following spring.

This fact sheet is prepared based on this trial and provides experimental background information, viable tested strategies for managing ALM organically, and methods to increase onion production.

Background: Three yellow onion varieties (Cortland, Sedona, and Talon) were evaluated in plots that were cropped previously to two cover crop mixtures. One cover crop mixture is referred to as ‘Myco’ and the other mixture as ‘Brassica.’ The Myco mixture included hairy vetch, rye, oats, sunflower, and white Dutch clover. The roots of these cover crop plants form an association with soil mycorrhizal fungi. These fungi increase the root surface absorbing area of nutrients and water by 100 to 1,000 times. The ‘Brassica’ mixture included mustard, rape, and daikon radish. These cover crop plants do not form mycorrhizal fungi association. However, the Brassica plants are nutrient scavengers from deep soil and release chemical compounds that may be toxic to soil-borne pests and weeds. When Brassica cover crops are winterkilled in the fall, as in Pennsylvania and northern States, they decompose quickly, releasing chemical compounds such as thiocyanates into the soil, serving as biofumigant to weeds and soil born pests (Gardiner et al., 1999; Petersen et al., 2001). The thiocyanate chemical compounds contain sulfur. The levels of sulfur in Brassica are much higher 0.69 to 1.04% (Lenz et al., 2019) than those produced by Myco cover crops species (0.3% for oats).

Onion seedlings were grown in bare-ground and plastic mulch (black, reflective silver and red). While there was no significant damage on onion plants grown in any plastic mulch in either 2018 or 2019, our results showed that onion plants grown in plots preceded by Myco cover crops were 2-times more damaged by ALM than the plants preceded by Brassica in 2018 and 2019 (i.e. 8 plants in Myco versus 4 plants in Brassica per 7.6 m (25 ft) long plot). 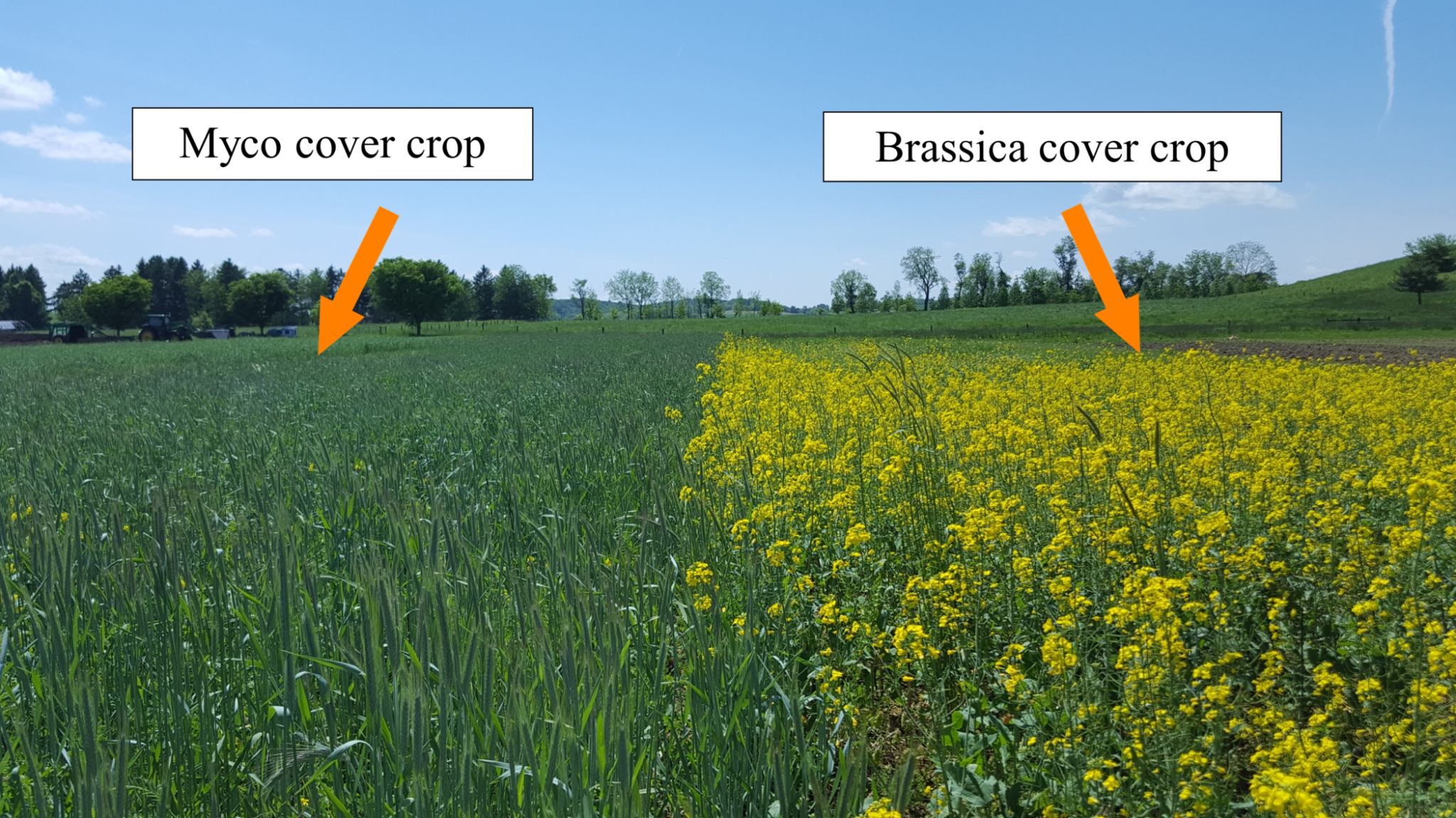 B: Sticky traps for early detection

Allium growers use visual cues when inspecting allium foliage for adult flies and oviposition marks. However, this method can be late for organic growers who are not using pesticides to spray the ALM adults and the damage is done. One of the tactics that was tested for early detection is the use of colored sticky cards. Blue and yellow sticky cards were used to monitor the early flight of ALM adults and during the first six weeks of onion plant growth in spring (photos below). The yellow sticky card proved to be more attractive to ALM adults than the blue ones and are recommended for ALM monitoring. 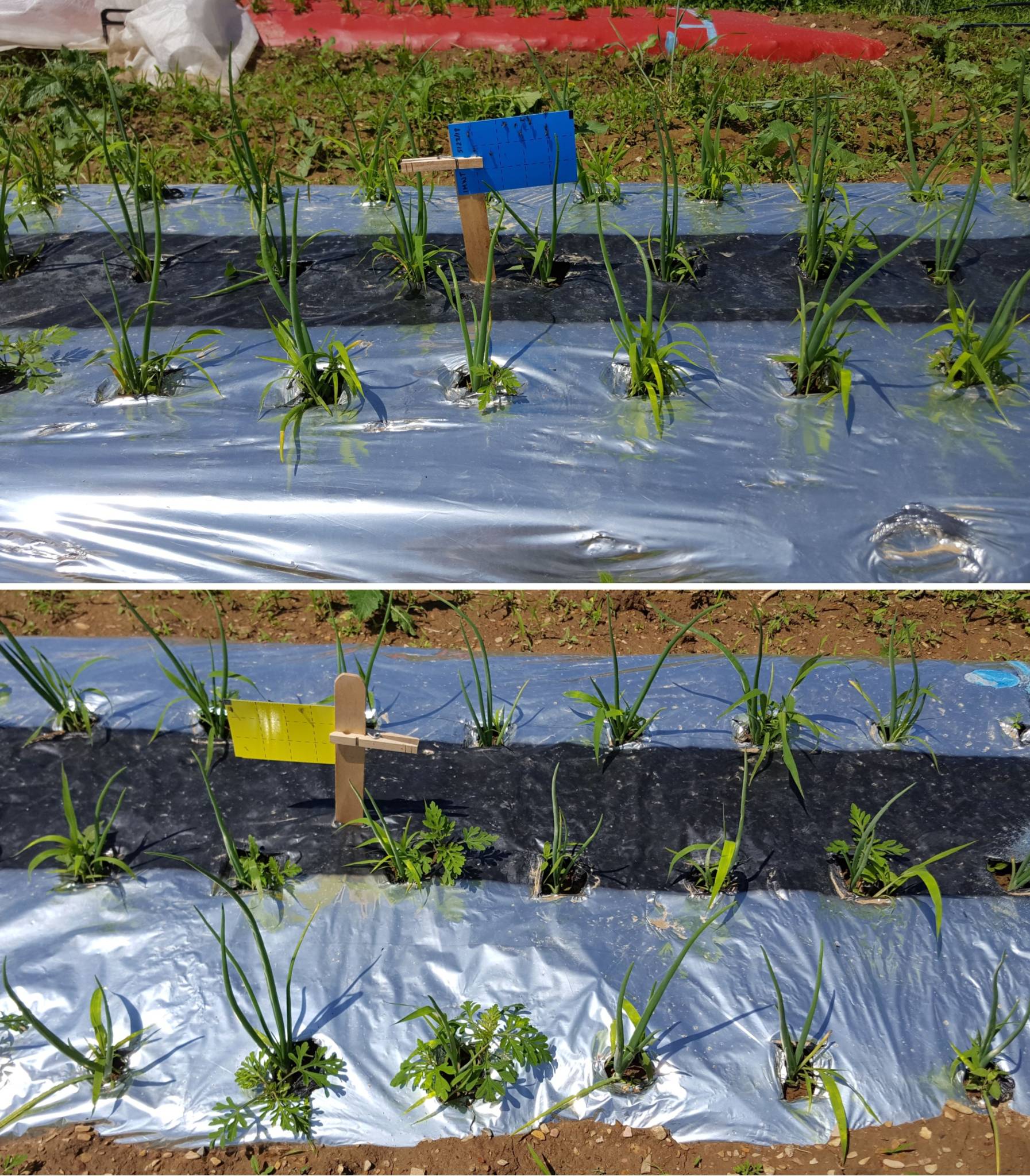 Covering recently-transplanted young allium seedlings in spring and fall provides exclusion of ALM adult from laying eggs in allium foliage and increases yield. Two periods of covering were tested (0, 30 and 45 days). The row cover served two purposes: a) as an exclusion, by protecting onion seedlings from being damaged by ALM during the ALM flight/laying eggs period, and b) as a micro-climate warmer, that led to increased onion yield when covered for 30 or 45 days, averaging 18,600 kg/ha (16,500 lb/acre) compared to those without cover, averaging 15,700 kg/ha (14,000 lb/acre). 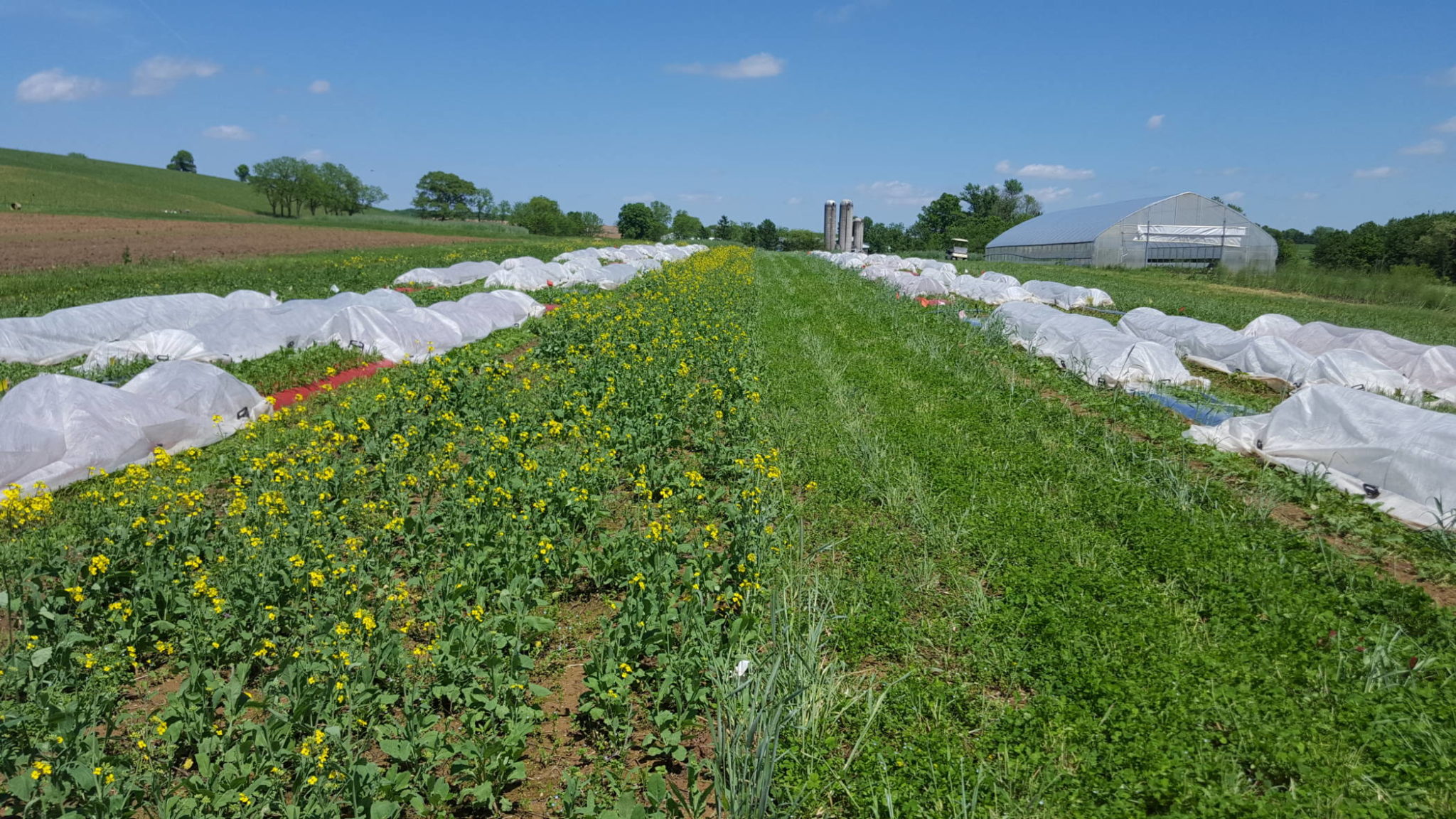 Over the two-year trial, more damage from ALM was seen in plants grown in bare ground. While ALM damage was minimal on plants grown in plastic mulch, it is worth noting that the damage was only seen on onion seedlings grown in black plastic mulch plots that were preceded by Myco cover crop. The onion yield in bare ground and plastic mulch was significantly greater in Brassica plots (averaging 14,460 kg/ha [12,900 lb/acre]) than in Myco (averaging 12,600 kg/ha [11,250 lb/acre]) in 2018. The yield in 2019 followed the same trend in bare ground (Brassica: 9,685 kg/ha [8,650 lb/acre]; Myco:6,440 kg/ha [5,750 lb/acre]). The yield was also significantly greater in plastic mulch, averaging 22,135 kg/ha [19,750 lb/acre] in Brassica plots and 20,934 kg/ha [18,680 lb/acre] in Myco. Therefore, the combined tactics of using plastic mulch and Brassica cover crops provided reductions in ALM damage and higher onion yields.

In summary, the tested tactics have been deemed viable in reducing the impact of ALM damage in organic onion crop.  Organic and non-organic allium growers in Pennsylvania and the Northeast could benefit from adopting these non-chemical tactics, such as transplanting into soils that were cropped with Brassica cover crop mixture to increase sulfur and reduce the attraction of ALM adults, yellow sticky cards for early detection of ALM flights, and floating row covers to protect young seedlings from ALM female adults laying eggs and consequently reducing allium yield losses. These multitactics can be incorporated into an IPM program for managing ALM in the Northeast. Further research is needed to understand the benefits cover that crop mixtures play in reducing pest damage and increasing allium crop production.

“Funding for work was made possible by the U.S. Department of Agriculture’s (USDA) Agricultural Marketing Service through grant AM170100XXXXG047. Its contents are solely the responsibility of the authors and do not necessarily represent the official views of the USDA.” Published on December 11, 2020.