The brown marmorated stink bug, Halyomorpha halys (Stål) (Hemiptera: Pentatomidae), native to Japan, South Korea, and China, has emerged as one of the most devastating pests of northeastern United States agriculture. Since its introduction in the mid-1990’s to Allentown, Pennsylvania (PA), BMSB has spread across North America and is now present in 42 states and eastern Canada. It has caused the greatest crop damage in the mid-Atlantic region and has become a homeowner nuisance (map below). In 2006, BMSB caused severe damage in fruit trees in New Jersey and PA, and large populations were found in soybeans and ornamentals. In 2010, BMSB affected 90% of peach crops at some mid-Atlantic farms, and it caused an estimated $37 million in losses to other mid-Atlantic fruit orchards. Due to diverse host plants, BMSB has established itself as a primary pest in various crops, and population pressures continue to increase. 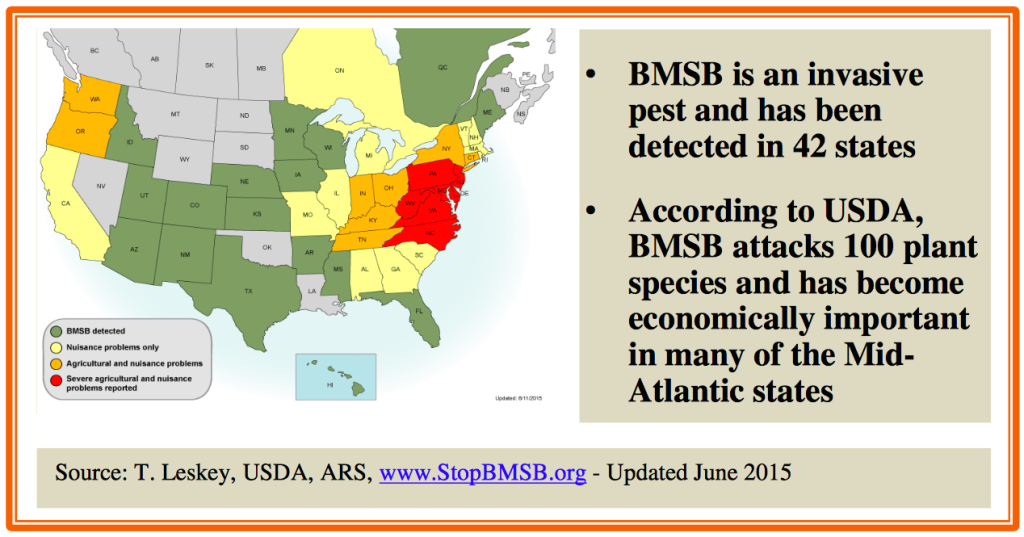 Brown Marmorated Sting Bug adults are relatively large compared to other stink bugs, measuring 1/2 – 2/3” long and 5/16” wide (Photo 1A). The name “marmorated” means banded or streaked, as in their appearance. The two white bands on their antennae, black and white banding on the abdomen, smooth shoulders, and mottled brown legs are distinguishing characteristics of BMSB that can help differentiate them from native stink bugs (Photo 1B).

BMSB adults and nymphs use their straw like mouthparts to feed on internal plant tissues. The action of sucking out the juices from fruits, vegetables, and seeds creates cork-like pockmarks and deformations that make fruits (such as apples, peaches, and pear) and vegetables (tomato, pepper (Photo 2), sweet corn) unmarketable.

In the spring, BMSB adults emerge from overwintering sites (houses, barns, storage buildings, and dead trees). They then become active on nearby crops such as peach, hardwood trees, and shrubs during warm sunny days. Adult BMSB have the capacity to fly more than a mile, and some have shown the ability to fly over 31 miles. In the spring and throughout the summer, BMSB adults feed, mate, and lay eggs. The adult female BMSB lays barrel-shaped, white to pale-green eggs in clusters of 28 on the underside of plant leaves. The BMSB female can lay 4-10 egg masses in her lifetime. BMSB have five nymphal growth stages, known as instars (Photo 3). Development from egg to adult takes approximately 32-35 days.

The first instar BMSB nymphs have an orange abdomen with brown rectangular markings. As the nymphs get older, they show banded antennae and legs with rust-colored abdomen and broad brown markings. Adults and all nymphal instars can feed and cause injury to their hosts. Nymphs and adults can be found on a wide range of plant species that bear buds, pods, and fruiting bodies. Their wide range of hosts include soybean, sunflower, cayenne pepper, tree of heaven, eggplant, tomato, Swiss chard, corn, cherry, moth orchid, mimosa, mulberry, and crabapple.

The high number of host plants that this pest feeds on, its high mobility, and its lack of natural enemies make monitoring this pest in both conventional and organic agricultural systems a critical, yet challenging task. In October 2012, Dr. Anne Nielsen, an Extension Entomologist at Rutgers University, and collaborating institutions including Rodale Institute, were awarded a grant funded by USDA – NIFA OREI program # 2012 51300-20097, entitled Whole-farm Organic Management of BMSB and Endemic Pentatomids through Behavior-based Habitat Manipulation.

As part of a multi-state project, Rodale Institute participated in the investigation of the temporal and spatial movement of BMSB and native pentatomids and their aggregation in order to identify potential organic pest management strategies. In 2012 and 2013 we investigated overwintering structures and fabrics, cone traps on wooden pyramids, trap crops, and overwintering bug houses to better understand stink bug dispersal and aggregation. Below are the details and results of these tactics:

In November of 2012, we surveyed structures such as buildings, offices, attics, sheds, greenhouses, barns, and garages at Rodale Institute for overwintering BMSB and recorded the number of dead and live adults per structure. We found living overwintering BMSB adults in the book store, the Rodale House, and the pavilion. Within these structures, we also identified fabrics in which BMSB preferred to hide and overwinter. Overwintering BMSB were generally found hiding in dark-colored and water proof rain coats and black fabric “Grow Bags” (Photo 4). 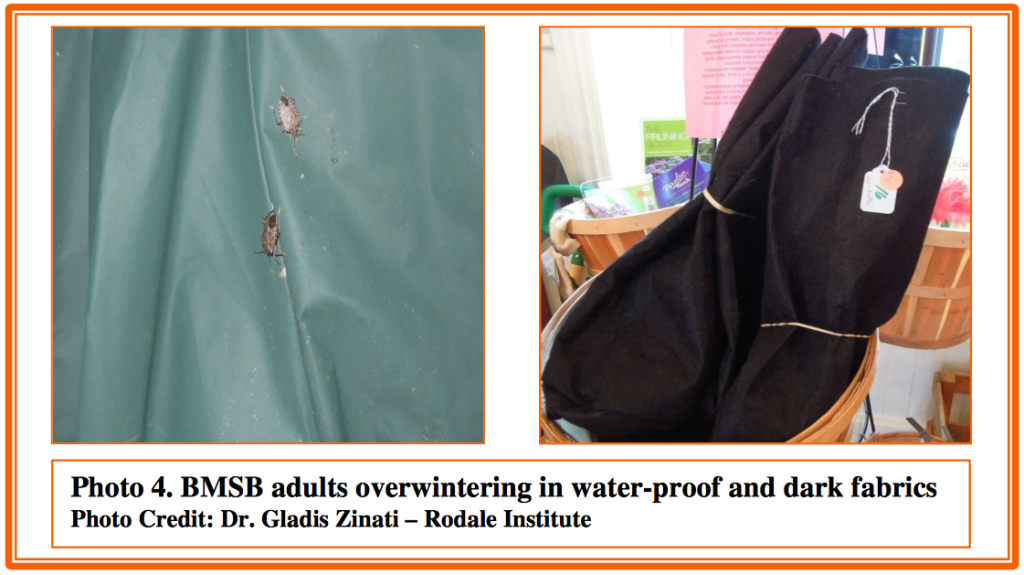 After an overwintering period, BMSB adults emerge from wooded areas and human-made structures in the early spring and begin sucking on green plants to nourish themselves and mate. They then move to crops such as peaches, then to berries, tomatoes, and peppers, and then to apples and field crops. To monitor the temporal and spatial dispersal of BMSB adults from the overwintering structures to nearby outdoor areas, we set up four cone traps, each attached to black wooden pyramids (Photo 5) in the spring of 2013. 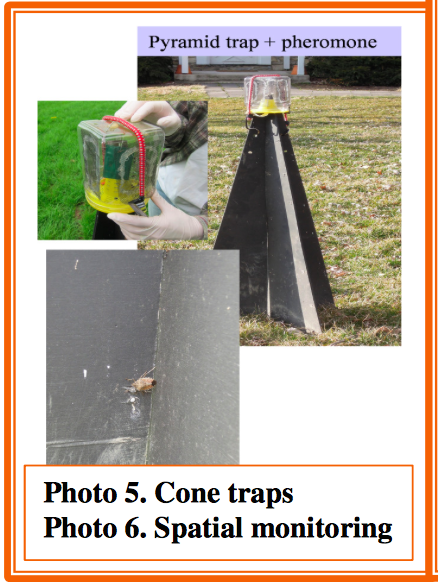 A combination of vapor tape (to kill insects) and pheromone “Dead-Inn” trap from AgBio were placed within the cones. The traps were deployed on each side of the Rodale Institute Siegfriedale House (four cardinal directions). The house is surrounded by a wooded area from the north and a small herb and vegetable garden from the west (Photo 6). We collected and recorded bugs trapped in the cones twice a week between April 18 and June 10. Our first collected BMSB adults (four females) were in the west trap on May 20. Four and 10 days later, two male adults were also caught in the west side cone trap. By June, more males and females were seen in the east and south cones. 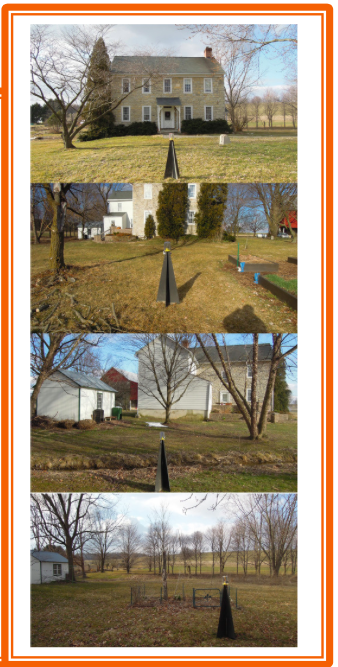 We monitored them weekly and did not see any BMSB egg masses, nymphs or adults until August 21, 2013. On September 4th, the first BMSB adult and nymphs were seen on fruit heads of sorghum (Photo 7), sunflower, and millet. The last BMSB adult was observed on October 2nd on the east side of sorghum (which was senescing) in a plot close to the wooded area. Among the tested trap crops, admiral pea flowered and died quickly, and it was not a good candidate for trapping BMSB. Although Okra and millet did well in trapping, sunflower and sorghum were found to trap BMSB of all developmental stages, as well as beneficial insects that feed on their eggs and nymphs. 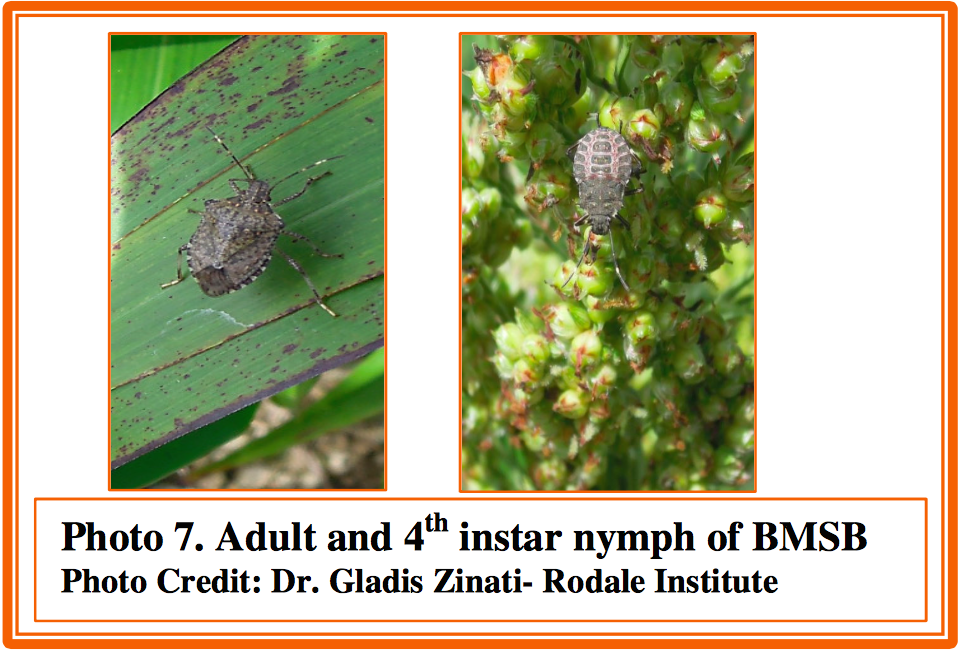 In addition, brown stink bugs, (Euschistus servus) were also seen on millet, sunflower (Photo 8), okra, and sorghum planted towards the south plots, near the woods. 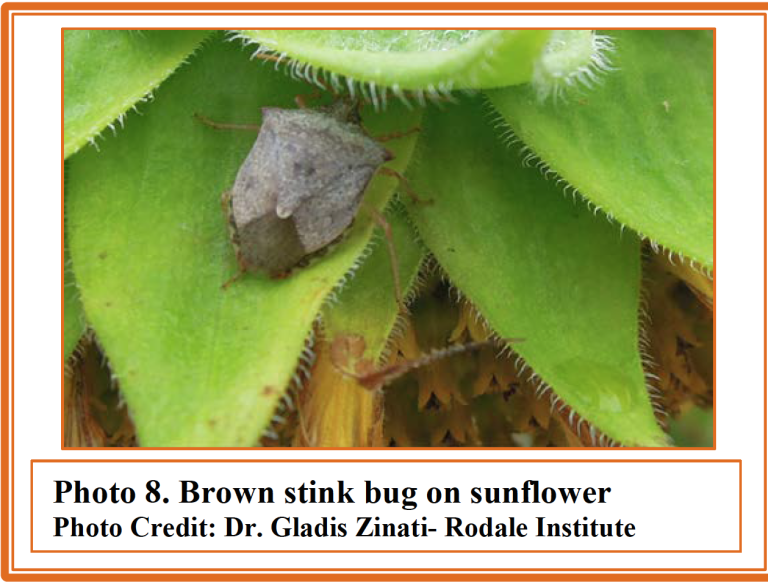 Other beneficial insects (natural enemies of BSB) (Photo 9) such as katydid, spiders, lady bugs, praying mantis, and wasps were also found on the plants where BMSB adults and nymphs were feeding. 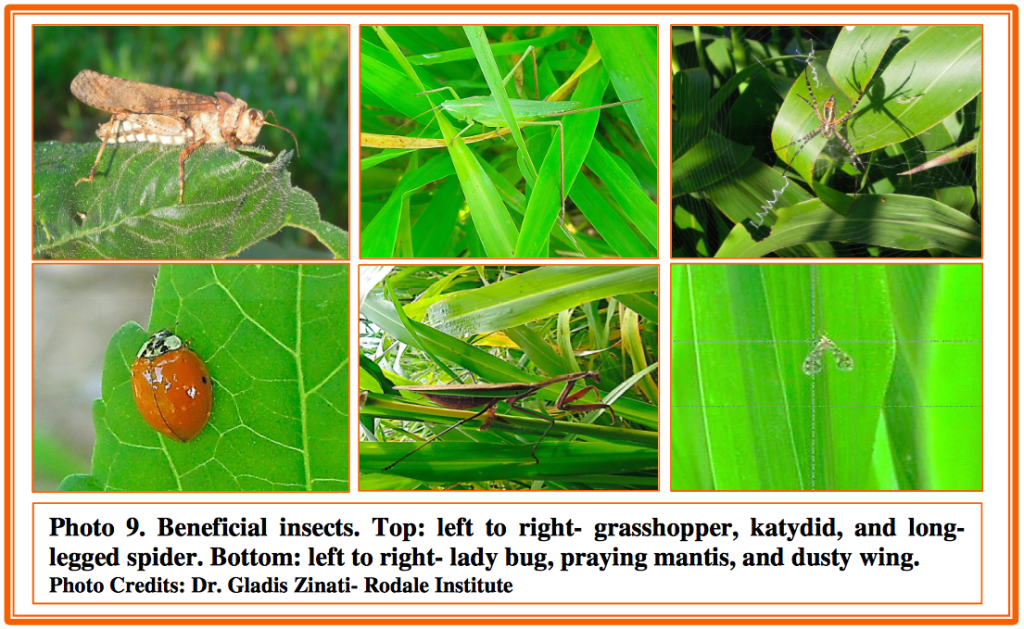 We participated in a multi-state project to monitor BMSB adult preference for overwintering location and cardinal direction of overwintering structures. The idea was to use materials that are commonly found on farms to create a shelter to “trap out” overwintering BMSB. Based on our scouting record from fall 2012, we identified two structures to setup and deploy overwintering BMSB shelter traps at Rodale Institute: the pavilion and the Siegfriedale House. These two structures are surrounded by a wooded area and organic crops. The shelter traps were made of wood, coated with white weatherproof paint and filled with 1m2 of used row cover (Photo 10), and deployed on September 16, 2013. We installed two sets of four trap houses: one set inside the selected structure (one trap on each side of the structure) and a second set outside of the structure. 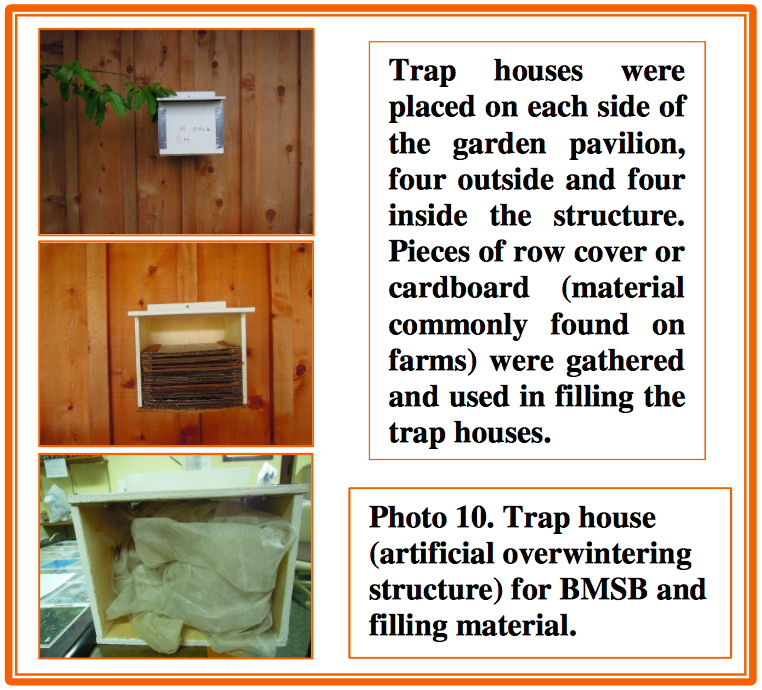 The brown marmorated stink bug (BMSB) feeds on a diverse array of crops, which may result in the damage of various fruits and vegetables for farmers, particularly those in the mid-Atlantic region. Populations of this pest may increase with food availability, warm climate, sunny days, absence of natural enemies, and lack of management.

Organic farmers should scout their homes and farm structures during the fall/winter season to discover overwintering sites for BMSB adults. In the spring, growers can monitor for BMSB using observational sampling. Additionally, growers can set up pheromone traps, such as the “Dead-Inn” trap from AgBio or the stink bug trap from Rescue.

After testing multiple plant species as potential trap crops for BMSB, we have identified sunflower and red sorghum to be two crops that are highly attractive to BMSB. These crops are tall, brightly colored, and have seeds that are good protein sources. Brown marmorated stink bug movement into cash crops may be reduced by planting sorghum and/or sunflower around the perimeter of a production area. Additionally, these trap crops attract and provide resources for natural enemies (i.e. katydid, lady beetle, and wasps), which may help enhance their populations and naturally reduce BMSB abundance. Integrating the above-mentioned management tactics can be a viable strategy for both organic and conventional farmers to reduce crop losses.

For information related to this article, contact Dr. Gladis Zinati at: gladis.zinati@rodaleinstitute.org

This material is based upon work supported by the U.S. Department of Agriculture, National Institute of Food and Agriculture and Rutgers, The State University of New Jersey, under Prime Award Number 2012-51300-20097, Subaward Agreement Number 4819.