The development of the roller-crimper has provided an alternative means for terminating cover crops and planting organic cash crops into rolled cover crop mulch that serve as a primary weed suppression tool. The utilization of a roller-crimper in no-till systems is gaining popularity among organic and conventional grain growers.

No-till practices create challenges for livestock farmers who incorporate manure into their soil, as valuable fertility amendments, prior to standard tillage and crop planting. In the fall of 2012, Rodale Institute in collaboration with USDA-ARS Beltsville Agricultural Research Center and North Carolina State University were awarded a USDA NRCS Conservation Innovation Grant to address the challenges of integrating manure applications into a rolled cover crop system to ensure nutrient retention for livestock farmers.

In the fall of 2013, a research team at Rodale Institute, Kutztown, PA, partnered with a livestock producer to demonstrate and evaluate the proposed integrated technology on corn production, weed management and soil health.

The aim of this article is to present readers with the latest research findings from the demonstration trial conducted at the livestock producer’s farm in Kutztown, PA and in conclusion make recommendations based on information gained from this project.

The team demonstrated and evaluated the impact a rolled cover crop with or without injection of starter fertilizer -pelletized poultry manure- could have on a) corn plant biomass and plant nutrient content, b) weed suppression, c) corn yield, and d) soil health. The farmer’s standard practice treatment was included in the demonstration for comparison. 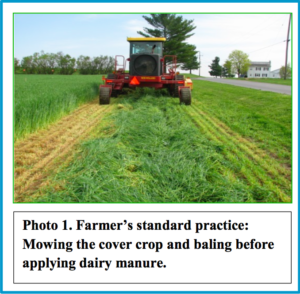 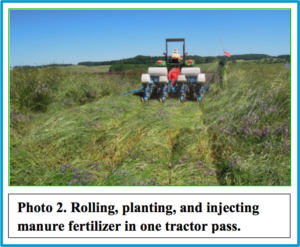 The mean cover crop dry weight was 11,840 lb/acre (13,272 kg/ha) in the rolled cover crop treatments (CC and CC+PL). The dry weight exceeded 7,137 lb/acre (8,000 kg/ha), the suggested value for effective weed control [1]. The cover crop biomass was dense which required modification of the planter to include additional weight to increase downward pressure and the addition of residue slicers to facilitate better seed placement [2]. However, in the FSP treatment, the cover crop biomass averaged 5,034 lb/acre (5,642 kg/ha), which was removed and baled by the farmer on May 22, 2014. 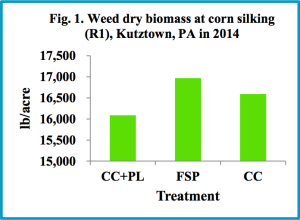 In all treatments, weed biomass was sampled between corn rows at corn silking (R1) growth stage. It is important to note that in the rolled no-till management treatments (CC and CC+PL) cultivation did not occur during corn growth, whereas, in the FSP treatment the farmer cultivated four times before corn plants reached silking, a common standard practice in tilled organic cropping system. Despite that, weed biomass in the CC+PL treatment was much lower than in either CC or FSP treatments.

The findings show that weed suppression was achieved in the C +PL treatment and surpassed the FSP despite the repetitive cultivations made by the farmer (Fig.1, Photo 3). The rolled cover crop mulch in the CC+PL treatment acted as physical barrier, limiting the light required for weed seed germination and weed growth [3-4]. In the no-till system, labor and fuel costs were reduced due to the elimination of certain field operations, such as plowing, disking for seedbed preparation and cultivation for weed management during the growing season. 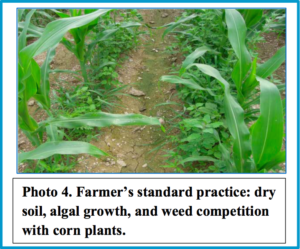 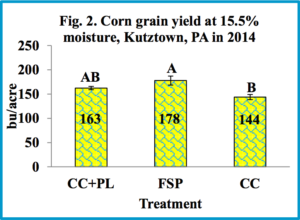 Greater corn yields were achieved in the rolled cover crop with injected poultry litter (CC+PL) treatment and were similar to that in the FSP treatment (Fig. 2). Results also show that it was critical to add an organic amendment at time of planting to boost corn grain yields in no-till cover crop-based organic corn production (Fig. 2). The addition of poultry manure increased corn yield by 19 bu/acre, which would amount to a revenue increase of $247,000 on 1000 acres of corn sold at $13/bu. 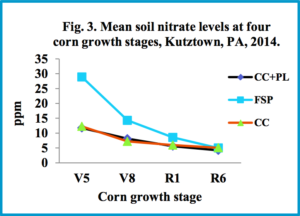