No-till production has gained popularity among farmers as a result of potential reduction in labor and energy use [1] and soil quality benefits such as improved soil structure and increased soil organic matter levels [2-5]. No-till production has largely been considered to not be an option for organic producers due to challenges in controlling weeds. The rising interest in no-tillage production practices among organic farmers has recently created considerable advancement in the development of a cover crop-based, reduced tillage organic corn and soybean production.

The organic cover crop based approach involves using a roller-crimper to terminate the cover crops and form a mulch layer [6-8] to suppress weeds. This production practice has been particularly successful in Pennsylvania, Maryland and North Carolina for organic soybean production when cereal rye is used as a high biomass cover crop, rolled and crimped prior to planting. However, this practice has been variable for corn production [9-11] due to constraints in nitrogen management (i.e., source, timing, and placement) and achieving adequate legume cover crop biomass for weed suppression. Thus, there is a need to combine the weed suppressive benefits of cereals with the nitrogen provisioning benefits of legumes along with additional fertility to achieve maximum corn yields.

In the fall of 2012, Rodale Institute in collaboration with USDA-ARS Beltsville Agricultural Research Center and North Carolina State University were awarded a USDA NRCS Conservation Innovation Grant to demonstrate the integration of starter fertilizers (pelleted manure) and their impacts on yield and weed competition in cover crop-based, reduced-tillage organic corn production.

The aim of this article is to present readers with findings from demonstration trials conducted at various locations between 2013 and 2014 and conclude with recommendations based on information gained from this project.

The cover crops drilled at all locations were a mixture of cereal rye (Secale cereal L.) and hairy vetch (Vicia villosa Roth) at seeding rates of 90 lb/acre (101 kg/ha) and 12 lb/acre (13.5 kg/ha), respectively. Rye and vetch varieties were the same in NC and PA (‘Wrens Abruzzi’ and ‘Purple Bounty’, respectively), while MD used ‘Aroostook’ and ‘Groff’ varieties, respectively. The dates for field operations – planting, roller-crimping, and harvest – at each location are listed in Table 1. (Table 1). 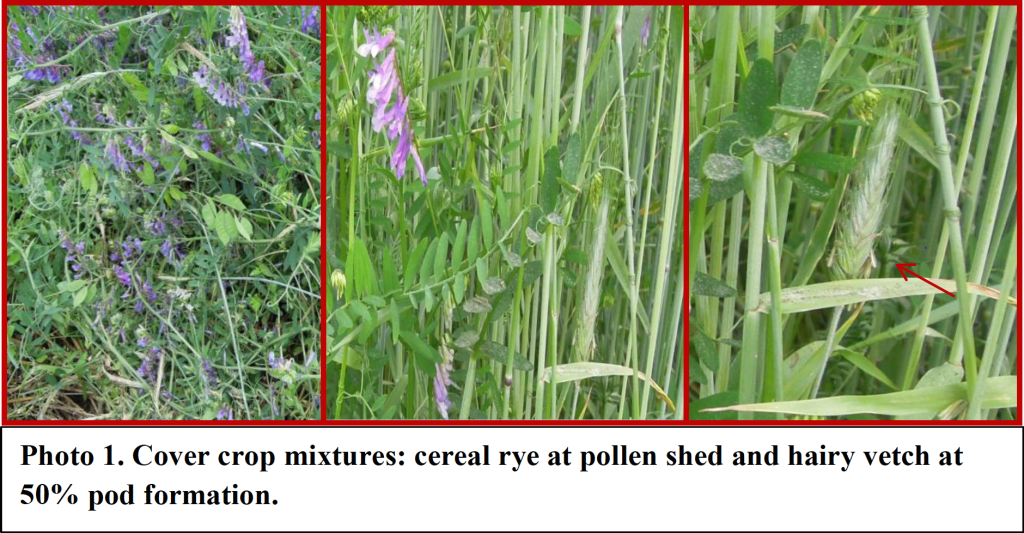 At the Beltsville and North Carolina sites, the cover crop biomass was rolled-crimped before plant sample collection to determine dry matter, followed by fertility application at time of corn planting using John Deere 7200 no-till planter (Photo 2). For detailed information on planter equipment refer to an online published fact sheet by Atwell and Reberg-Horton [12].

At Kutztown, cover crop biomass was collected from standing plants before rolling to determine dry matter. The roller-crimper was front-mounted and the planter with the fertilizer hoppers were back-mounted to a tractor. Rolling-crimping of cover crop mixture occurred simultaneously with corn planting (Photo 3). 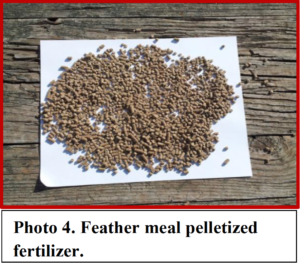 At Beltsville and NCSU (Kinston and Salisbury), the design was a split-plot with fertility as main plot and weeds vs. no weeds as subplot with three or six replications, depending on the site. Five fertility treatments were evaluated and included: 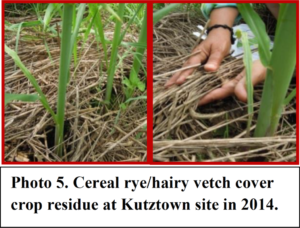 At Kutztown, the design was a randomized complete block design with four replications of four fertility treatments:

Excellent weed suppression was observed in the five site years with the highest cover crop biomass levels (Table 2 and Photos 5-6). At the Beltsville 2014 site, cover crop biomass was slightly less than the suggested value for effective weed control, however, weed coverage was still less than 15%. At the Kutztown site, compared to no fertility treatment, weed pressure with subsurface FM was similar, but lower in the subsurface PL treatment by 35% and greater in topdress PL by 31% 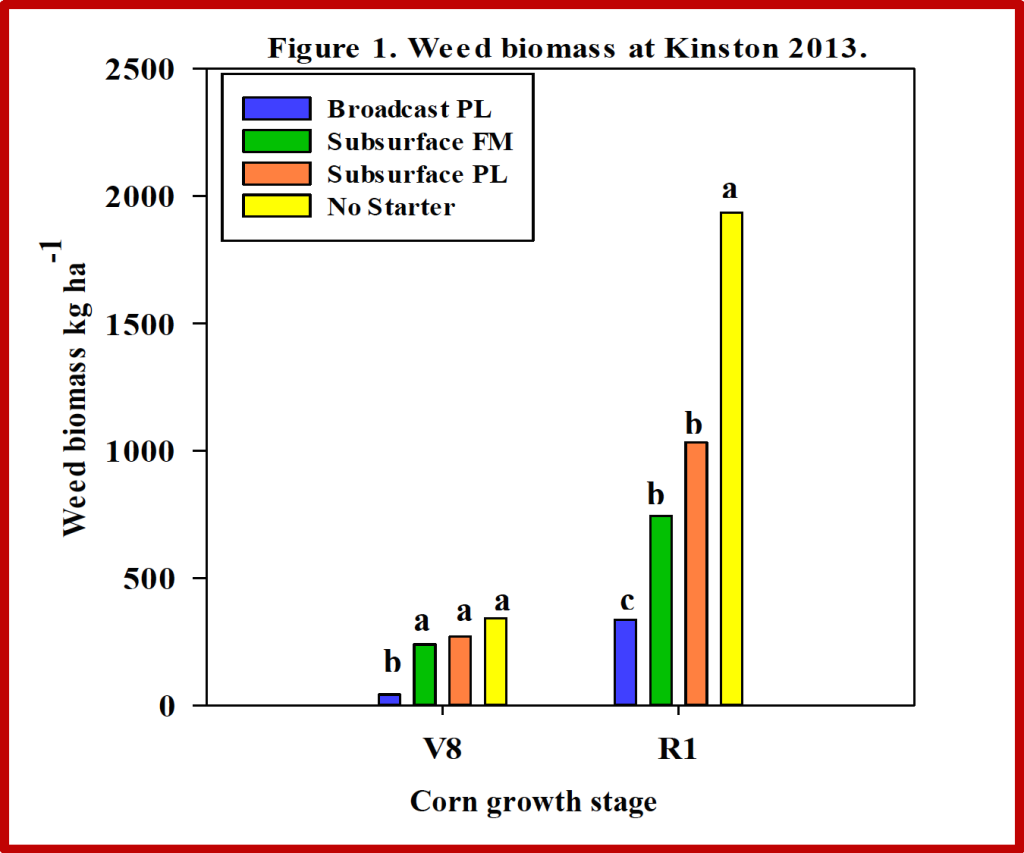 Field plots at Beltsville 2013, Kinston 2014, and Salisbury 2013 and 2014 all had excellent weed suppression and corn yield was similar between the high and low rate broadcast litter treatments ranging between 145 to 165 bu/acre (Fig. 2). However, corn yield was reduced with the subsurface poultry litter and no added fertility treatments to ~100 bu/acre. Feather meal subsurface banding yielded 30% more than in the subsurface poultry litter treatment. 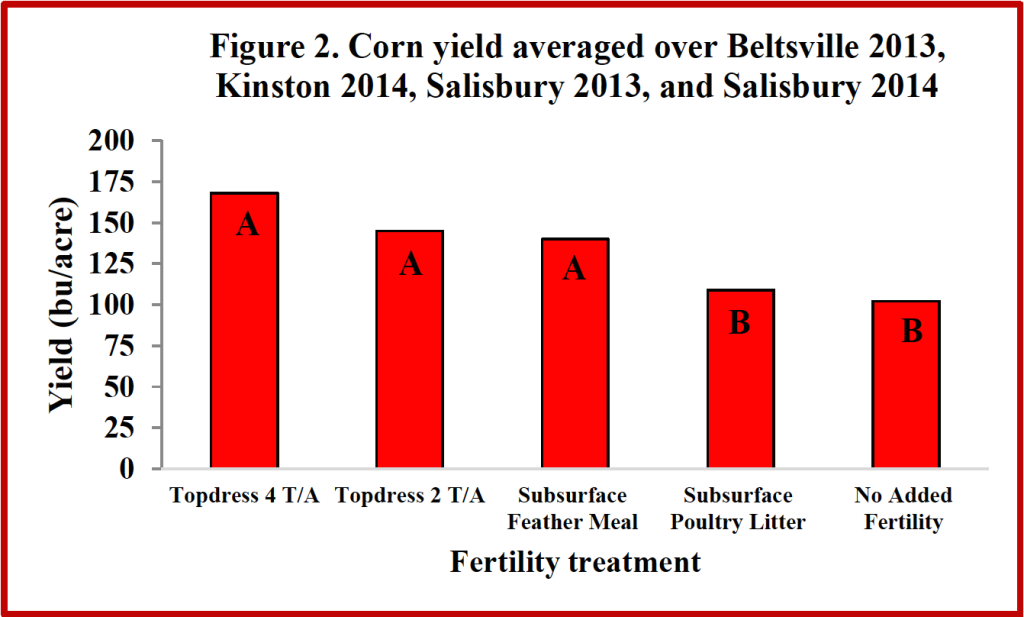 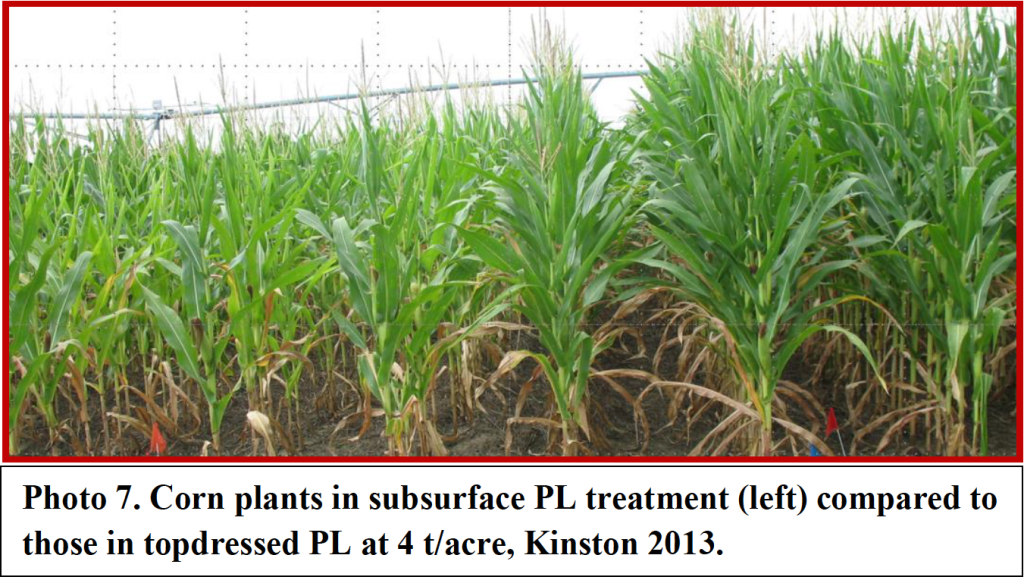 At Beltsville 2013, corn grain yield was similar among all fertility treatments. However, this study site has a long term history of legume and manure use. Similarly, at Kutztown, there was no significant difference in corn yield among tested treatments (Fig. 3). Corn yield ranged from 170 bu/acre in no added fertilizer treatment to 180 bu/acre in subsurface FM treatment. 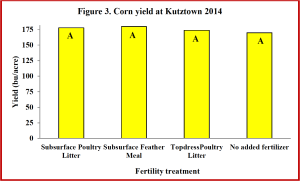 Results from these trials indicate that sites with high baseline fertility (with a long-term history of legume and manure use), additional fertility may not be necessary to maximize corn grain yield (e.g. Kutztown, 2014 and Beltsville 2013 sites). Further investigation into these findings is merited as these results were only observed at two of the seven study sites.

At the Kinston, NC site in 2013, there was high weed pressure in the subsurface fertility and no added fertility treatments which negatively impacted corn yields.