This article originally ran in the fall 2017 issue of New Farm Magazine, the magazine of Organic Farmers Association. All OFA members receive a complimentary issue of New Farm twice per year. Click here to sign up!

Back to the Future: Could Hemp Be the Next Big Opportunity for Organic Farmers?

In a recent episode of Jay Leno’s Garage, the comedian strolls through a field of plants towards a sleek, cherry-red sports car. The Renew, he explains, owes its light, strong, dent-resistant body to 100 pounds of hemp; hence, it’s often called the “cannabis car.” Jokes about taking the “high” way come easy, but Bruce Dietzen, founder of Renew Sports Cars, quickly points out that although his green vehicle is made of Cannabis sativa, it’s a variety of the industrial hemp species, not the species known as marijuana. “You could smoke all the cannabis hemp you possibly want and you won’t get high,” Dietzen tells Leno. This hemp, he continues, is a renewable, versatile material, which can be used to build and fuel a car. The biggest challenge, he has found, is that he must source the fiber from China due to the lack of an established hemp-farming industry in the United States.

Back in the colonial era, hemp was cultivated quite widely, predominantly for fiber to make the ship rigging and sails that powered the critical transportation of the time. In fact, it was such an important agricultural commodity that in the 1600s, it was illegal to not grow the crop in some British settlements. But the rise of cotton and then synthetic materials, coupled with the antidrug movement, put an end to the commercial farming of cannabis—even varieties without mind-altering properties. Since 1970, Cannabis sativa has been classified as a Schedule I controlled substance, which means that the U.S. Drug Enforcement Administration (DEA) requires a permit for its manufacture, importation, possession, use, and distribution. Despite these regulations, however, many processed hemp products are allowed to be imported and sold without such permits. Many states have been loosening the restrictions on hemp farming, but the federal government did not budge until Congress passed the “Legitimacy of Industrial Hemp Research” provision in the 2014 farm bill. This provision allowed for limited cultivation of industrial hemp under state-sanctioned agricultural pilot research programs. To distinguish the “drug” varieties from the “nondrug,” the provision established that industrial hemp must not exceed a 0.3 percent concentration of marijuana’s primary psychoactive chemical, THC.

Hemp farming is now legal in 33 states. In 2016, 9,650 acres of hemp were grown in 15 of those states under about 800 licenses. These licenses were issued mostly by state agencies of agriculture, reports Eric Steenstra of Vote Hemp, a nonprofit advocacy group working to change laws regarding hemp farming in the U.S. In addition, 30 universities are conducting hemp research. The economic opportunity is significant for this relatively low-input crop, which produces both fiber and seed that can be used for clothing, health and beauty products, paper, food, animal feed and bedding, biofuels, and manufacturing and construction materials. From a health perspective, hempseed has been labeled a “superfood” because it is rich in beneficial omega-3 and omega-6 fatty acids. Of additional interest to many is a product in the female flowers: cannabidiol, known as CBD, a nonpsychotropic believed to have positive therapeutic effects, although U.S. scientific research on the chemical is limited.

Globally, of the 30 countries growing significant amounts of industrial hemp, China is the largest producer and exporter. According to Cornell University, it accounts for 20 percent of total hemp production. Steenstra’s conservative estimate places the U.S. retail value of hemp products sold worldwide in 2016 at around $688 million, a 20 percent growth over the prior year. While China is the leading exporter of hemp fiber to the U.S., much of the hempseed and oil comes from Canada, which first allowed research cultivation licenses in 1994 on an experimental basis and then legalized commercial production in 1998 under the Office of Controlled Substances (OCS) of Health Canada.

Beyond the potential financial rewards, other compelling reasons are driving farmers to grow this sustainable, regenerative crop, which thrives across a wide range of climates and requires few inputs. “Hemp fits very well into an organic system,” says Ross Duffield, farm manager at Rodale Institute in Kutztown, Pennsylvania, which has one of 16 research permits awarded by the Pennsylvania Department of Agriculture. “It gives farmers a new crop that improves the health of the soil, mitigates runoff and erosion, and grows so vigorously and tall that it crowds out weeds like foxtail, pigweed, and amaranth. We can harness it for use as a cover crop and a cash crop.”

Over four years, Rodale Institute will conduct research in the field and greenhouse and work to build awareness of industrial hemp’s environmental sustainability, health benefits, and new technological applications. “As farmers, our job is not to produce food. It’s not to milk cows. It’s not to grow corn. It’s to produce healthy people. Everything that we do in relationship to food and soil is focused around making people healthy,” says Jeff Moyer, Rodale Institute executive director.

“The fact that this pilot project is happening at Rodale gives it a stamp of integrity and authenticity,” notes Dennis Kucinich, a former congressman from Ohio and a two-time Democratic presidential candidate.

Organic farmers across the country are actively taking part in the regeneration of hemp farming. Myla Todahl and her husband, Jim, farm 1,500 acres of small grains and row crops in northwestern Minnesota, including 60 acres of hemp this year. “I was surprised my husband agreed to farm hemp,” Myla admits. She first learned of the opportunity at an organic-farming conference.
“I was intrigued by the variety of products with the hemp label on them,” she says. “You can use the whole plant—stalk to seeds. You can even make plastic out of it.”

After they received their license from the state, the Todahls procured seed through the University of Minnesota and have been networking to learn the best hemp farming practices. A fellow farmer with a season under his belt suggested they inform local law enforcement of their plans. “One time, the farmer found teenagers out in his fields taking selfies,” Myla recounts.

In Oakland, Oregon, an hour south of Eugene, Dennis Wilde and his wife, Jean, farm grains, olives, and kiwi berries in addition to their second-year, 100-acre crop of hemp. “It seemed like a potentially high-value seasonal crop that would work well in rotation with legumes and other grains,” Dennis says. The farming part is pretty straightforward, he adds: “You don’t have to do much to help hemp thrive. You put it in the ground, give it a little water, and watch it grow.”

The Wildes are raising some hemp just for CBD; they start female plants in a greenhouse and transplant them into a field watered with drip irrigation. The flowers (the source of the CBD) are harvested by hand and dried like hops, he explains. For their hempseed crop, they sow seed directly into the field and use wheel-line irrigation. Before the hemp gets tall enough to shade out weeds at the start of the season,  hand-weeding can be time-consuming. Dennis explained, however, that he appreciates hemp’s contribution to soil health and that the ability to harvest the seed using the same equipment he does for other grains. He notes  that the crop requires the extra step of state field tests to ensure that it meets the low level of THC mandated by the government.

The Wildes have run into some obstacles with the legal, processing, and sales aspects of hemp farming. To produce the highly

sought-after specialty food ingredient known as hemp hearts, the seeds must be hulled. To extract hemp oil, the seeds are pressed. Hemp stalks harvested for fiber need to be decorticated so the longer, outer strands can be separated from the woody inner core for different uses. “Theoretically, there’s a market for all parts of the plants,” Dennis says, “but the infrastructure’s not there [for processing and distributing the products]. The market is so immature.”

The legal and political climate can also throw curveballs. In Oregon, 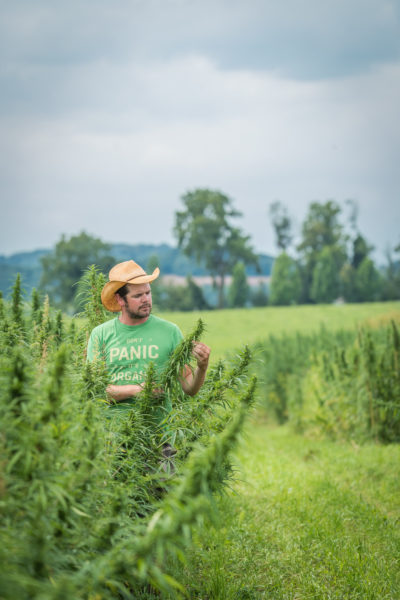 the state allows hemp cultivation, but each county can have different regulations. Dennis points out that at the federal level, the DEA still doesn’t approve of hemp growing, despite the fact that the USDA approved licensed research farming under the 2014 farm bill provision. Thus, having expert legal advice “is absolutely essential.”

Ben Dobson, farm manager for Old Mud Creek Farm in Livingston, New York, is planning to overcome some of the anticipated obstacles of infrastructure and sales by adding processing capabilities to his operation. The farm’s associated business, Stone House Grain, already makes and markets soy meal for animal feed. Dobson will likely purchase a human-grade extruder to make hemp oil and meal and to possibly offer that service to other New York farms, all while developing a line of branded hemp products.

He received some of his seed this year through Cornell University’s industrial hemp research program, but it arrived too late for an optimal grain harvest. Seed can still only be imported into the U.S. under a DEA license, which may cause delays and shortages. Dobson believes that such wrinkles will be ironed out with time, and he’s happy to be a pioneer in the field. “I’m very interested in hemp as an ecologically and environmentally viable alternative to some petroleum- and tree-intensive commodities like cotton and wood pulp,” he explains. He will be tracking carbon sequestration, nitrogen cycling, and total nutrient analysis in his test fields before planting and after harvesting the hemp. Dobson emphasizes that it’s important to educate the local community. Farmers need to explain that although industrial hemp and marijuana are the same plant species, they have very different characteristics. “We’ve been careful to get word out so people understand what we’re doing and why,” he explains.

Steenstra of Vote Hemp is working to assist farmers with roadblocks, including providing guidance in a recent case in which a farmer was refused water rights on the grounds that she was farming an “illegal” crop. “In this gray-area phase, it can be hard for farmers to get access to capital,” he says.

While the infrastructure needed to encourage hemp farming can be rebuilt, an unfortunate and permanent loss is that of historic American hemp varieties. For example, an 1850s-era Kentucky strain was renowned for its height, hardiness, fiber yield, and maturation speed. Unfortunately, it is now considered extinct after seed stock in the USDA’s National Seed Storage Laboratory was discarded in the 1950s.

For a look forward at how U.S. organic hemp farming might develop, Alfred Grand of Absdorf, Austria, near Vienna, shares his experience growing hemp for seed and fiber since 2009. Industrial hemp production was authorized in Austria in 1995, after almost 40 years of prohibition. Grand (an international member of the Organic Farmers Association) started planting hemp as a new crop to rotate between corn and soy on his 220-acre farm. “We try to manage the soil fertility only with crop rotation and cover crops,” he says, adding that he also reduces tillage as much as possible. “We needed a plant that has good weed suppression itself, and hemp does.” Grand makes compost tea with the product of his vermicomposting business to soak seeds before planting.

He has focused most recently on selling seed for oil and meal. “The fiber market right now is quite poor and labor-intensive,” he explains. “There is some industry in Germany, but the processing and transportation costs are high for the return.” By contrast, Grand says that the demand for organic hempseed destined for food products has grown, with a 20 percent jump in value since last year. “I think many of the consumers who are interested in food made from hemp are the same who value the organic label.”