Customers of New Hampshire (NH) farmers’ markets are regularly greeted by voluptuous eggplants, hearty wheat berries, verdant leafy vegetables, raw milk cheddar, and numerous local meats. But locavores who want to use cooking oils rather than butter have had to break ranks and buy imports from CA or elsewhere—until now. A new addition to the scene this winter will be locally grown and locally pressed canola and sunflower oils.

Several oilseed crops produce edible oils, but according to University of Vermont (UVM) researchers, canola and sunflower have the best potential for the New England region. They grow well in the damp, shorter season of the NH seacoast, and the seeds’ high oil content is also of high quality due to the low cloud point.

Canola is a plant with yellow flowers that produces pods whose round seeds are crushed to obtain oil. It is a genetic variation of rapeseed, developed by Canadian plant breeders for its nutritional qualities. Each seed contains approximately 40% oil, and the remainder of the seed can be processed into canola meal for high-protein livestock feed. Sunflower seed varieties range anywhere from 39-49% oil. The product is generally considered premium oil because of its light color, high level of unsaturated fatty acids and lack of linoleic acid, mild flavor, and high smoke point.

In Lee, NH, nestled behind a thick forest and among verdant fields, lies Tuckaway Farm owned by the Cox family. Several farming-related ventures operate from this multi-generational farm, including a vegetable and meat CSA, the use of draft horses, and maple sugaring. This season, farmer and PhD candidate Dorn Cox planted approximately 18 acres in sunflowers that he purchased from Seeds 2000 (non-GMO untreated, non-organic seeds).

Although Dorn was enthusiastic about getting the crop going this year, planting too early in the spring can often be a challenge due to the potential for lodging (stems become brittle and break as crops mature). He planted the seeds in May, which meant the crop was ready to harvest this fall. Soil prep included adding ample manure and wood ash to boost the potassium levels and under-sowing with red clover for weed control. Following harvest, a crop of spring wheat is planted. To weed between the rows, Dorn uses a Lilliston cultivator and tine weeder, but no irrigation is required.

“In New England we contend with topography, but we’re advantaged with rainfall,” says Dorn. “Humidity isn’t a major concern, although it can be an issue for mold collecting on the heads.” Dorn stresses the importance of a three- to five-year rotation for oilseed crops to avoid white mold (Sclerotinia). He also has a challenge for breeders: figure out a way to select a particular angle at which sunflower heads mature as a way to reduce bird access and inhibit mold (which occurs when the heads are facing down). 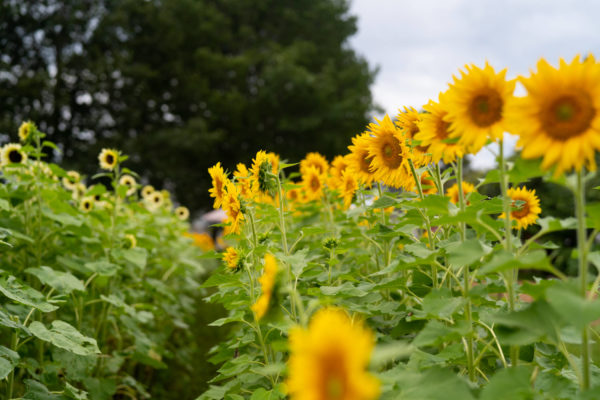 Dorn completes the pressing on the farm as well. He uses a Chinese oil press purchased from AGICO that does double duty, also making biodiesel from farm-grown canola. The model, #GC80, is rated for 200 lbs/hr, with a 7.5 hp, 3-phase motor that Dorn runs off a 3-phase generator that he bought direct from China for $1,100. The generator is powered by Dorn’s biodiesel. Furthermore, he is able to process the oilseed meal into flakes, which can be transferred to a pellet-maker for use as animal feed pellets with 29% protein. According to Dorn, canola is a better crop from a fuel perspective, but sunflower oil makes a better salad oil due to its pleasant taste and suitability for cooking.

Proper storing of sunflower seeds is crucial. “Everything wants to eat sunflower seeds,” says Dorn. He stores them in 1-ton poly tote bags and places fans inside to control moisture. Ideally, the seeds are pressed with 10-12% moisture content (an early-fall freeze helps reduce moisture and improves threshing ability). Dorn collects 35-40% oil from the sunflower seeds, and he stores it in food-grade plastic drums to eliminate sunlight and oxygen. In these conditions, the sunflower oil is able to remain stable for a few years.

The oil will be marketed as cold pressed, and he is sure it will all sell through direct marketing to local restaurants, farmers’ markets, wholesale, and farm sales. Interestingly, the cost of sunflower oil will be similar to NH maple syrup (approx. $60/gallon). There are no plans to sell the mash pellets for animal feed because they will all be fed to animals on the farm. This speaks to Dorn’s overall motivation for growing oilseeds: “it’s about the economics of a closed loop system.”

Located in the same quaint rural community of Lee, NH, Coppal House Farm sits elegantly perched on a knoll surrounded by rolling fields, sheep, pigs, chickens, draft horses, and antiquated farm equipment. The owner, John Hutton, is currently growing canola on four acres; the canola was planted in August 2011 and harvested in August 2012. He also planted sunflowers in mid-June and harvested them in September. Next year, the farm will grow soybeans for oil, but they are currently in the fields to add nitrogen. The seeds are all non-GMO, although non-GMO seeds were nearly impossible to find when John began growing canola a few years ago.

Canola was a natural choice for them because it fits well into their planting rotation with pumpkins, oats, corn, and hay fields, and it helps reduce weed pressure. They lime the fields every year and add 10 tons of manure/acre. Luckily, canola germinates quicker than weed seeds in cold weather, therefore eliminating weed pressure. However, deer pressure remains. Deer love canola, and as the fields are far from the farm proper, it impossible to keep watch. John is trying a propane air cannon set to fire at automatic intervals as a deterrent.

Last year, John brought his canola seeds to Dorn Cox’s farm and used the Chinese press, but the seed openings were too large, and many seeds were lost. For this year, they purchased an Oil Prince made in Germany (purchased from Circle Energy in Wisconsin), which contains both an oil press and pelletizer. The cost was approximately $6,500 and is considered appropriate for small-scale use. For storage, they plan to use stainless steel containers and dark glass bottles stored in a cool, dark place for the final product.

A certain percentage is added to the feed for his pigs, chickens and sheep, which reduces his feed costs. According to research at UVM, conventionally grown oilseed meals have a value of about $200/ton in the Northeast, and organically grown seed meals are worth about twice that amount. An alternative use for seed meal is as biomass fuel in furnaces or boilers designed for corn and/or biomass pellets. John and his wife planned ahead when they built their house and bought a furnace that can utilize these pellets, further strengthening the sustainability of their farm and adding another reason to grow oilseed crops.

One of the challenges for farmers entering into oilseed production is the cost of buying a combine. A report published through UVM indicates that new units typically cost more than $100,000, not to mention the cost of pressing the seeds and processing the oil. A recent SARE-funded grant found the cost of conventional canola production at $204/acre, while under low-input management (no fertilizer or herbicide), it cost $147 with the total gross income/acre ranging from $200-$900.

The importance of sharing equipment and knowledge to successfully produce high-quality oils cannot be overemphasized. Although equipment sharing isn’t possible for everyone, knowledge exchange will be an invaluable asset. Dorn Cox owns his own press, but he uses fellow farmer and oilseed grower John Hutton’s bottling equipment. During harvest time, John uses Dorn’s combine (10’ head) and his seed cleaner.

Despite the large investment involved in entering into the new venture, these two farmers in southern NH are forging ahead and blazing the oilseed trail with the hope that other growers will follow. GreenStart, a nonprofit organization that Dorn Cox started, has been instrumental in organizing equipment-sharing efforts in the community. In the future, Hutton plans to have a building for oilseed growers in the community to bring their seeds for cleaning, pressing, and bottling (either for food-grade oil or for conversion into biodiesel).

At Coppal House, they are optimistic about the sales of their oil despite the fact that this is only their second year producing it. Many local restaurants are already poised and ready to buy the oil, and Hutton will sell it year-round at farmers’ markets in NH. The goal is to sell 8oz bottles for $5 each. They plan to create a visually appealing display of three oil colors with soybean flashing orange, canola shining yellow, and sunflower glowing its subtle, light hues.

“We will have to knock on a few doors, but we certainly won’t have to beat down any doors,” says John.

Renee Ciulla is a vegetable grower, teacher and writer based on the New Hampshire Seacoast. Besides growing and eating local food, she loves being in the mountains and finding mountain goats.