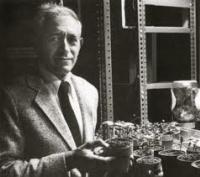 Major issues associated with industrial food production led Dr. David Pimentel to research human population and to champion pesticide reduction and energy conservation. Pimentel is Professor Emeritus of Ecology and Evolutionary Biology at Cornell University, and he coauthored the 22-year review of the Rodale Institute Farming Systems Trial in 2005.

Following publication, Pimentel told Grist, “Yes, we can produce these crops organically, with less energy, while improving the sustainability of the soil.” We are pleased to be honoring him this year at our Organic Pioneer Awards on September 13, 2013.

“Soil organic matter (soil carbon) and nitrogen were higher in the organic farming systems, providing many benefits to the overall sustainability of organic agriculture.

Although higher soil organic matter and nitrogen levels of the organic systems were identified, similar rates of nitrate leaching were found as in conventional corn and soybean production.

Fossil energy inputs for organic crop production were about 30% lower than for conventionally produced corn.

Depending on the crop, soil, and weather conditions, organically managed crop yields on a per hectare basis can equal those from conventional agriculture, but it is likely that organic cash crops cannot be grown as frequently over time because of the dependence on cultural practices to supply nutrients and control pests.”

Or see the 30-year update here.