With chickens grazing by his feet, Eric Henry, president of TS Designs, lifts a branch of organic cotton just plucked from the backyard garden of his T-shirt printing business. As if picked from the sky, the puffs of white cotton resemble tiny cumulus clouds hanging from winter branches.

Since the mid-1990s, Henry has helped grow TS Designs, based in Burlington, North Carolina, by turning a highly toxic T-shirt production into a cleaner, safer operation with a conscious and sustainable business model. Part of that has been transforming a traditional Carolina crop into more than just a commodity.

“We have a long history of running around the world and chasing cheap labor. We’ve got to take the blinders off,” Henry says. He specifically places blame on the North American Free Trade Agreement (NAFTA) for the decimation of local cotton production. Since NAFTA, he says 35,000 textile jobs were lost in North Carolina alone.

“Through this globalization of the textile industry, everyone puts [their cotton] in silos and sells it to a broker,” says Henry. “Once that broker buys that cotton, and buys from a lot of other people with essentially the same quality, you don’t really know where it came from. The ‘country of origin’ is required by law, but that’s only the last place it was. It’s impossible to go backwards.”

Despite the bleak industrial model in which we find ourselves, demand for locally grown organic cotton is on the rise. States with a relative abundance of conventional cotton are ramping up efforts to increase the viability of growing it organically. 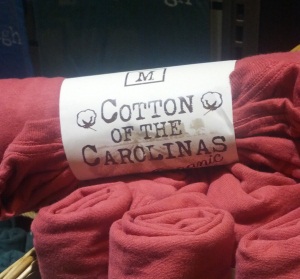 As such, TS Designs launched their Cottons of the Carolinas program five years ago, sourcing local cotton and creating a product—a simple T-shirt—that has been grown, spun and woven all at home.

According to Mary Wilks of Carolina Precision Consulting, the farmers decided going organic would result in a productive trial. Wilks’ company consults growers on everything from fertility to pest management to certification, and it has been working with TS Designs for about three years, connecting growers with processors.

“Once the mills got word of what we had going on, they were really excited,” Wilks says. “I mean, they offered contracts. One of the growers, Orpha Gene Watson at Hickory Meadows Organics, said it’s nice to grow something that people want, that people call you for instead of you having to try and sell it.”

Orpha Gene Watson and his family have been farming conventional crops for more than three generations in Nash County, North Carolina. They began the organic arm of their farm in 2008 with organic tobacco. They started planting organic cotton in 2011, and have seen first-hand the fruits of their labor.

That’s not to say the idea wasn’t met with trepidation.

“When we decided to do this five years ago, everybody said it’s so tough,” Henry adds. “And, in the scheme of things, it ain’t much.” It takes just under 1 pound of cotton to yield one T-shirt, and with only 25,000 pounds of local, organic cotton harvested last year, the program is still a very small drop in a very large bucket.

But the yield gave growers and everyone on the value chain hope that organic cotton in North Carolina could become a fruitful enterprise, much like in Texas. More organic cotton in the United States grows in Texas than in any other state. Last year, the Texas Organic Cotton Cooperative celebrated 20 years of growing.

In Texas, organic cotton sells for $1.50 per pound. In North Carolina’s first year of production, TS Designs paid farmers $1.75 per pound (compared with an average of $1.30 per pound for conventional cotton). This year, they paid $2. From an industry perspective, Henry insists that North Carolina has the means to quickly reach Texas levels of production.

“North Carolina is one of the few states with the existing infrastructure to go dirt to shirt,” he says.

Organic cotton seed is also incredibly affordable, which, according to Henry, costs only $70 per bag. GMO seed is at $400 a bag. While GMO seed is formulated to persist through weed pressure, the incessant pigweed problem in North Carolina still causes conventional farmers to spend even more each year on pesticides. “For these farmers, it’s not quite the deal they expected when they got into this four or five years ago,” says Henry.

Of course, organic farmers aren’t immune to problems. The natural adversities faced by all farmers growing organically, regardless of the crop, are universal. Recent drought in Texas caused an incredible decline in meeting demand. Weeds and insects increase labor costs everywhere.

In 2010, a Global Market Report on Sustainable Textiles by the Textile Exchange predicted organic cotton would be a $7.4 billion industry by 2012. But worldwide production faltered in 2011, falling for the first time in ten years by 37%. India, a country thriving on cheap labor costs, provides 70% of the world’s organic cotton but also saw the greatest reduction.

Aside from uncontrollable natural disaster (like a freak hail storm that wiped out most of North Carolina’s organic crop last season), many critics account for a lack of communication along the value chain for a still struggling U.S. organic cotton industry.

Yet TS Designs maintains that their transparent supply chain model assures success down the line. He and his partner farmers are working with local sustainable agriculture experts and programs to find solutions to production problems on the ground.

The transparent supply chain from farmers to ginners to processors and everyone in between provides a level of ownership and accountability that TS Designs believes engenders long-term success.

“I’m hoping that it could be a game changer for the way cotton is grown, at least in our area,” says Henry. “It gets down to strictly economic sense, and if the economies are there, this thing can go from 100 acres to maybe 10,000 acres. We were lucky with one year, and we’ve gotta do it again.”

What remains is a high demand for organic cotton that is locally sourced and sustainable not only for the environment, but for the local economy.

“People are taking advantage of not only growing the cotton, but keeping the cotton here,” says Henry. “That’s how it’s going to have an impact on jobs, rather than if we just grow the cotton and ship it overseas. Our biggest competition is price. Labor rates in Bangladesh are $0.55 an hour, versus $15 an hour here. Yes, it costs more, but we’re impacting hundreds of local jobs at the same time.”

Despite the hail storm that knocked out most of Watson’s organic cotton crop, he perseveres. He sees organic cotton as an opportunity to keep his sons and nephews, all studying agriculture, on the farm with a secure lifestyle.

“It’s just like any other product,” says Watson. “Maybe some years you just break even. That’s a risk we take every year. But I would like to continue doing it. And hopefully we can. It’s a pretty unique thing to put on a shirt and be able to say, ‘I grew cotton that made this shirt.’”

Victoria Bouloubasis is a freelance food and agriculture journalist based in Durham, NC. Her work can be found on her website: http://www.victoriabouloubasis.com.