In the last few decades, factory farms have taken over the global meat supply. These consolidated, large-scale operations each raise hundreds to thousands of animals every year. Their focus is on maximum production at the cheapest cost—and that comes at the expense of animal welfare and environmental health.

The prevalence of factory farms has increased as demand for meat and milk has grown across the globe, and that trend continues. Particularly as incomes increase in developing countries, so will demand for animal products. By 2050, global meat and dairy production is projected to increase more than 150%.1

Can our planet handle the burden? In 2017, the EPA reported that agriculture contributed nearly 10% of all greenhouse gas emissions, and livestock accounted for a full third of that.2 Animal feed production and processing contributes the bulk of those emissions, with manure next in line.3 It’s no secret that factory farming methods harm our air, water, and soil.

However, it’s a myth that animal agriculture has to be destructive or that we have to stop eating meat to save the planet.

The Unfortunate Facts of Factory Farming

Beyond these most egregious problems, there are still others with factory farming. One is that the industrial livestock system is heavily dependent on grain. Pasture does not exist on factory farms.

For ruminants especially, like cows, that’s a problem. Cows’ digestive systems aren’t built for grain—they’re built for grass. Pigs, too, are foragers by nature whose genetics and instincts are to graze on pastureland, not soybean meal.

Grain-fed animals also emit more methane. Between 1990 and 2005, U.S. methane emissions from dairy cow manure rose 50%. The EPA traced the increase in part to greater numbers of factory farms.10 Pasture-raised animals, on the other hand, produce manure with about half of the potential to generate methane.11

Growing grain for feedlot animals is also an environmental strain. Corn and soybeans, the most common crops grown for feed, require literal tons of artificial nitrogen fertilizers and herbicides made by burning millions of tons of C02.12. The result is an increasingly unsteady climate, a food system saturated with toxins like glyphosate, and polluted air and water.

Responsible livestock management can bring those marginal lands back to life.

To be certified organic, livestock farmers have to follow these rules:

Many organic farmers also emphasize pasture health and utilize rotational grazing, a practice that could have a huge impact on global warming.

The Power of Pasture

Grass comes from soil. Soil is the bedrock of our entire world, but we’re losing it fast. If we continue to lose soil at current rates, we have fewer than 60 years remaining before global topsoils are depleted.13  We need the soil, and it needs us. 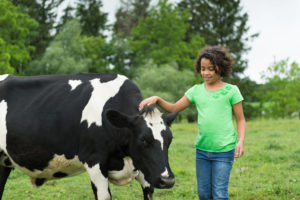 Left alone on a patch of land, animals like cattle and hogs quickly destroy all signs of life, compacting the soil as they go. The result is desertification, and nearly three quarters of North American dryland has been affected by the phenomena.14

Other times the animals will eat only the tastiest plants and leave other plants untouched. The uneaten plants then flourish, dominating the landscape. The result is the spread of invasive species and unusable rangeland.

However, if animals are managed with rotational grazing, the environment sees big returns.

Grazing encourages plants to send out more and deeper roots. Those roots are continually sloughed off to decompose in the ground, boosting soil biomass and fertility and sequestering carbon from the atmosphere. As the soil carbon matter increases, so does the land’s ability to hold water, preventing erosion and agriculture runoff.

One recent study has shown that converting cropland to perennial pasture managed regeneratively “[has] the side effect of storing more carbon in the soil than [the farm’s] cows emit during their lives.”15

Get this: If we applied strategic grazing to just 25% of our croplands and grasslands, we could mitigate the entire carbon footprint of North American agriculture.16

And we don’t have to use prime pastureland to see these effects. Unlike energy-hungry crops that require fertile soil and ample water, animals can graze on subpar land otherwise unusable for growing food.

So, which would you choose? Beef, pork, chicken, or dairy from a feedlot; or food managed with care for the animals, soil, air, and water? If the latter, choose organic and grass-fed products whenever and wherever possible.

There is one other option. Laboratory-grown meat is a thing, and it’s almost ready for the supermarket.

Cell-cultured meats don’t come directly from animals but are made from animal tissue. They mimic the texture and flavor of real meat. Some environmentalists and animal activists think these new products are the answer, but others don’t agree. Some “fake” meats still rely on GMOs and biotechnology, and some have been found to contain traces of glyphosate.

Would you eat meat grown by scientists? Hop into the comments and tell us what you think.

How to Take Action

Lab meat or not, if you’re ready to say no to factory farms and make the switch to regenerative beef, poultry, and pork, here’s how to do it: