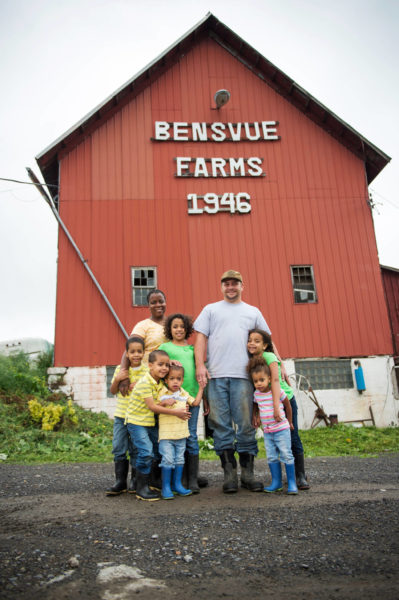 On a spring day about 15 years ago, Chandler Benson sat at his desk in a cubicle in the Chicago skyscraper where he worked as an actuary. He looked out the window across Lake Michigan, felt the sunlight coming through the glass, and thought, “I can’t do this forever.”

He picked up the phone and dialed. “Dad, I’m coming back to the farm in five years,” he said. He yearned to return to his family’s 300 milking cows in upstate New York, where he’d grown up in a big yellow house overlooking Cayuga Lake. He’d always enjoyed the peaceful serenity of milking.

Chandler’s dad, Chuck Benson, was thrilled. He had made a similar decision, although under different circumstances. When he was a young man in the Peace Corps, advising Colombian cattlemen on hay crops and animal husbandry, he wrote a letter to his own father to ask about becoming a partner in the family dairy farm.

When Chandler called from his cubicle, Chuck had already been dreaming about building his own energy-efficient earthen home for retirement. Chuck and his wife, Andra, knew that one day they’d have to consider selling the farm to an outsider if none of their
eight kids decided to return. “We were just happy that
we could put that off for another generation,” Chuck says today.

“Our prayers were answered. It would have been very difficult to sell the farm,” adds Andra, who at the time was considering transitioning the farm to organic. “We literally had an epiphany [about going organic]. The cows would be healthier—we would be healthier—without chemicals, pesticides, and sprays. And when Chandler said he would be returning to the farm, we knew it would be better for the next generation of our family.”

Soon after Chandler made the phone call, he proposed to his sweetheart, Aziza. They had met at the Coast Guard Academy and stayed together as she completed tour after tour, rescuing vacationers near Cape Cod, becoming an officer, and patrolling fisheries off the Pacific Coast. She had started dropping not-so-subtle hints to Chandler about getting married, saying things like, “You know…this nice church on Chicago’s North Side books up real fast…”

Chandler bought a ring and mailed it to Aziza’s next stop in Alaska. When it arrived,  he called to tell her to pick up the package immediately. When Aziza opened it, she first thought he’d sent a pair of earrings, but then she saw the ring. Inside were two cards. One read, “Will you marry me?” and the second said, “Let me be the first to congratulate you  on your engagement.”

Aziza neared the end of her commitment to the Coast Guard and was ready to begin her new chapter with her husband on the Bensons’ farm. She says that although she grew up in inner-city Chicago, her family had always had a small garden. “We’re earthy people, so we were never too far removed from where food comes from,” she adds.

The Bensons’ farm has always been a dynamic, changing place. Chandler’s grandfather bought the original 200 acres of land and started the dairy with just seven cows in 1946, the year Chuck (Chandler’s father) was born, and added innovations—a milking parlor, bunker silos, a freestall barn, a waste lagoon—as the family and the farm grew. Chuck and Andra took over the farm in the early 1970s, just as Chuck’s parents were ready to retire. In time, they grew the land to 1,000 acres, 300 milking cows, 300 replacement animals, and three barns. During the 1990s, they began pasturing the cows.

For years, Chuck had been hearing the common refrain among dairy farmers: “Get big or get out.” But, he says, “going that way would have taken away the advantages that drew us to this life in the first place. Becoming organic looked like the way to stay the same size and economically support our family.”

Andra, who managed the bookkeeping, was frustrated with volatile milk prices, never knowing how much money to count on from month to month, never being able to make an accurate budget. She felt that milk-buying corporations appeared indifferent to struggling farmers, even when they offered onetime cash-signing bonuses. Both she and Chuck were uncomfortable with mixing chemicals and applying them on their fields. So when Andra learned that Organic Valley would help with their organic certification and offer stable pricing, she was excited to become a member-owner in the cooperative. She began the paperwork, had their pastures certified, and took out a loan to buy organic feed to sustain the animals while their cropland was in transition. And in 2007, the year they completed the certification process, she and Chuck relocated to their new earthen home built into a hillside just down the road from the original homestead and featuring a west-facing, passive-solar facade.

Chandler and Aziza arrived that year with their 2-year-old twin daughters and another set of twins on the way, marking the fourth generation of Bensons on the farm and the seventh generation of twins in Aziza’s family. Chandler began working as farm manager while his parents continued to oversee the entire business. 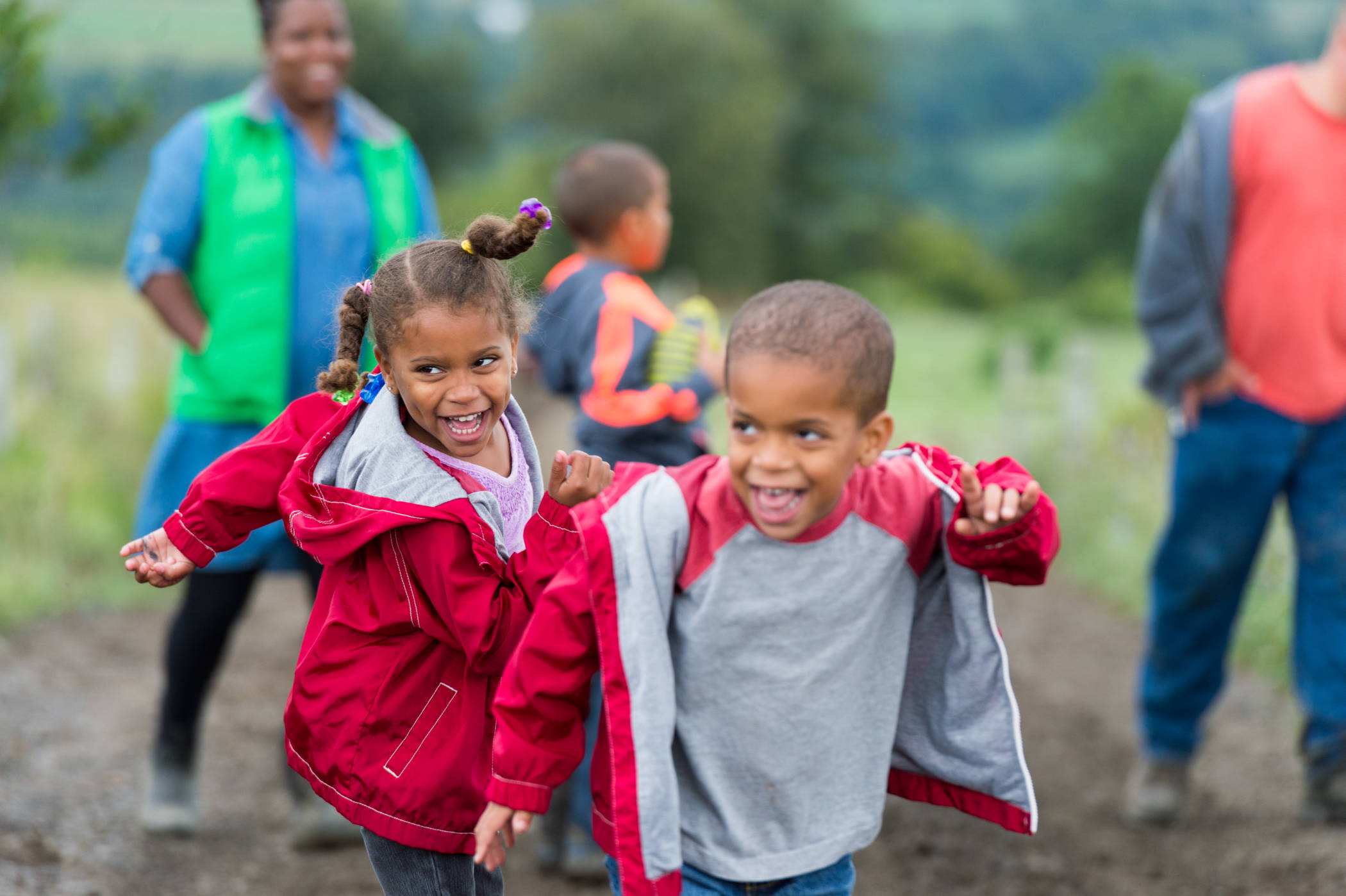 “As a kid, I didn’t appreciate what being in charge of it all would be like,” Chandler says, explaining that although he’d had plenty of experience working on the farm as a teenager, he still had much to learn about the importance of cow comfort, proper rations, and forage quality. “I lost a fair number of cows that first year. The environment you put the cows in is paramount.”

In 2011, Chandler and Aziza became owners of the family operation, known as Bensvue Farms, just as their third set of twins was born. That summer, the region experienced extreme drought. The cows couldn’t graze much on brown pasture, and the crops didn’t yield enough feed to last through the winter. Because corn prices were high, the cows weren’t fed as much as usual and therefore didn’t produce as much milk. With circumstances like that, “it’s hard being business owners,” Aziza says. They got by with relief from government and Organic Valley programs.

Chandler and Aziza keep looking to improve the business, as previous generations have. Recently, Aziza reconsidered their harvesting operations. The family had always done its own harvesting: mowing crops, merging windrows, chopping vegetation, and trucking it back to the bunker silos to ferment into silage or haylage. When equipment broke down, the farm manager worked to fix it. Aziza realized that a lot of the farm manager’s time was wasted on repairs when his expertise could be better used mentoring Chandler. What’s worse, adds Chandler, if an equipment failure interfered with the timing for the harvest, the forage was at risk of not fermenting properly, turning it into moldy waste.

In light of these costs, Aziza proposed switching to an outside harvester. Now the family contracts the job to a person with a reliable workforce and new equipment, and the harvesting is finished in a third of the time that it was previously. With the help of an Organic Valley grant writer, Aziza also recently applied for a New York State grant to buy a baler so that the family can harvest fields of rye and triticale too small for the contractor.

Chandler is investigating the possibility of having dedicated nursing cows feed and care for the calves, a system his neighbor uses to reduce human labor and improve calf health. For now, the eldest Benson daughters help Grandma Andra take care of the calves, and the younger kids feed the family chickens and collect eggs. One of Chandler’s brothers, who lives on the same road, serves as the farm’s large-animal veterinarian. Chuck and Andra continue to offer advice. “Farming as we know it is a family commitment,” Chuck says.
“It’s important for the kids to see the value of hard work, of growing our own food,” Aziza adds. “This is a pure way of life.”

Alison Fromme lives in upstate New York and has written for National Geographic, Discover, and other national publications. In 2015, she was awarded a National Association of Science Writers Career Grant.