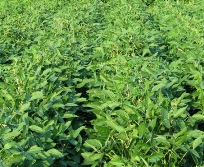 Aesthetic appeal is not the only reason farmers fight weeds. A weed-free field can lead to higher yields and a cleaner product. Without pesky weeds, crops can take advantage of additional space, light, water, and nutrients. Soybeans in particular, are “plastic”, meaning they can grow to fill available space. Though home gardeners can effectively control weeds by hand weeding and hoeing, hand weeding is just not a viable option for large scale corn or soybean farmers. So what are some alternatives?

Not all weeds are created equal. Weeds that emerge soon after a crop has been planted often have a bigger impact on the crop’s growth than weeds that only emerge after maturation. Once crop plants grow large enough, they may be able to compete with the weeds and form a closed canopy between rows, thus stifling weed growth.  If weed management techniques begin early enough in the season to allow crops to establish successfully, late season weeds can often be largely ignored.

Why not simply spray herbicide to get rid of weeds? Or till frequently? Though both these approaches effectively kill weeds, both have serious drawbacks. Conventional herbicides can contaminate waterways and groundwater and have potential health risks. Even herbicides approved by the Organic Materials Review Institute (OMRI) are not necessarily the best answer, as they are quite expensive, especially for large scale grain farmers. And frequent tillage can lead to soil erosion and nutrient loss. Tillage has the additional cost of time, fossil fuel, and tractor passes, leading to increased carbon emissions. Due to these challenges, many agricultural researchers are focusing their efforts on finding alternatives to these typical weed management practices.

An Introduction to Weed Management Experiments at Rodale Institute

In conjunction with research ecologist Steven Mirsky at USDA-ARS in Beltsville, MD, the Rodale Institute implemented three research trials in 2010 in an effort to answer some questions about the impact of weeds on crop yields. Our goal is to repeat these experiments in 2011 and compare the results. The titles and focuses of these experiments are:

When most people think of a field that is ready for planting, they picture bare soil. Bare soil is great for growing crops, but it’s also great for growing weeds. One way to get around this problem when planting soybeans is to start planning for weeds in the fall by planting a dense rye cover crop. Come spring, when the rye is mature (about six feet tall), a tractor-mounted device called a roller-crimper can roll the rye down, killing it and leaving a thick mulch on the ground. Soybeans can then be planted directly into this mulch without disrupting the rye mat, leaving it intact for the entire growing season. Voila, organic no-till!

Similar cover crop rolling techniques have been used by farmers elsewhere, and scientists have been figuring out how to integrate these techniques into an organic no-till crop rotation. They have found that a thicker rye mat suppresses weeds better, and the best ways to get a thicker mat are to either increase the seeding rate of the rye or let the rye grow longer. There are a multitude of factors, however, that influence how effectively this method can hinder weed growth and bolster crop yields.

The factors we tested in the Establishment experiment were:

We had 16 treatments that combined the above factors, along with one treatment that was meant to mirror standard till practices in organic soybeans. The many treatments, replicated four times each, allowed us to determine which techniques had the greatest impact on weed biomass, soybean yield, and many other dependent variables.

Even before we harvested the soybeans, we noticed some differences among treatments. For instance, removing the rye mulch resulted in about four times the amount of weeds (in dry weight) when compared to leaving the rye mat intact. This was to be expected, as the rye mat acts as a weed barrier. Of the three planting devices used when the rye mat was left intact, the Monosem planter with shark teeth resulted in the highest yields at 31 bushels/acre. The addition of shark teeth to the Monosem planter was supposed to help cut through the rye mat during planting and provide a thin strip of bare soil for the soybeans. Additionally, yields had more to do with the size of the soybean plants than the number of plants in the plot, illustrating the plasticity of soybean plants.

Even if you do everything right in establishing soybeans, weeds may still find a way through the rye mat and become an issue. In a concurrent experiment, we established all the soybean plots in exactly the same way (planting soybeans into rolled rye), but we followed up with various weed management strategies that attempted to leave the rye mat intact for the entire season. Although these management strategies incurred the same time and emissions associated with additional passes, they did not disturb the soil much. Erosion and runoff were therefore theoretically minimized, and the rye mat remained a weed barrier.

mounted implement called a “high residue cultivator” (HRC). Mowing between rows has been suggested as an alternative to hand weeding. The tricky part is mowing low enough to cut small weeds, but high enough to leave the rye mat intact. The HRC has coulters that cut through the rye mat to create a path for the sweeps to ride under the rye mat, just below the soil surface to cut weed tops from their roots or uproot them. The HRC was used again one week later to ensure the weeds did not re-root. The difficult part here is to avoid bunching the rye mat or opening it too wide, which leaves bare soil.

The factors we tested in the Supplemental Management experiment were:

Hand weeded plots and plots without any supplementary weed management were used as a means of comparison, as these plots would show the two extremes of weed presence and pressure.

These treatments were not as visually different as the plots in the establishment experiment, but we did make some interesting observations. Mowing did not significantly reduce weed biomass when compared to the control plots where weeds had not been managed at all. However, there was a statistically significant difference between the control plots and the HRC plots, as well as between control and hand weeding. This means that the HRC effectively removed weeds. Of the HRC plots, timing the passes at 5 and 6 weeks after planting produced the best yields, at an average of 34 bushels/acre. The hand weeded plots also had an average yield of 34 bushels/acre. There were fewer but heavier plants in the HRC treatments compared to the mowing treatments, again linking bigger plants, not more plants, to higher yields.

Though we originally thought that between-row mowing could be a quicker alternative to hand weeding (for research purposes only), we found that mowed treatments had lower yields than the hand weeded plots. This might relate to timing; perhaps we did not keep weeds mowed throughout a critical period. Our data actually suggest that using the HRC produces yields comparable to hand weeding.

So many factors influence weed management that it’s hard to pick just a few to analyze. In our Corn Competition experiment, we wanted to compare conventional and organic plots, as well as till and no-till treatments, to see if corn in these systems reacts differently to weed pressure. How do weeds affect corn yields? Do different levels of weed pressure result in different levels of yield? Are some systems inherently more weed tolerant than others?

This is how we established the gradient in the three farming systems:

Unfortunately, the treatments also did not create a well-defined weed gradient for the conventional systems. Hand weeding was rarely needed to get weed-free plots, and even half-rate spraying was often enough to make plots essentially weed free. This overlap made it impossible to see how yield was affected along a weed gradient and hindered us from comparing results between organic and conventional plots. Even though our experiment did not go as we had hoped, it did reveal to us that perhaps a half rate of herbicide is adequate to control weeds in conventional plots.

What can you do now?

Effective weed management strategies begin before you ever see a weed in your field. There are many variations on timing and strategies surrounding rolling cover crops and planting cash crops, and the best strategy may depend on your climate, soil type, weed pressure, and other factors. Farmers can start by integrating cover crops into their crop rotations, and later try testing methods of rolling cover crops and planting directly into the mat. Once crops are established, weed control (if needed) should be performed within the critical period, before weeds begin competing with crops for space and resources. Equipment like the high residue cultivator is a big investment, but perhaps a long term farm plan would include purchasing some equipment to help perform mechanical weed control. Establishing an effective weed management plan is an important first step to reduce spraying and tilling for any farmer thinking about making the transition.