With ever-growing competition in the marketplace, standing out to consumers with farm-fresh, local produce is becoming increasingly challenging. Offering a “niche” crop that separates you from the competition and stands out visually and in culinary excellence will draw customers to your other products. “Baby ginger speaks for itself on the farmers’ market table because the beautiful pink and cream colored rhizomes sell themselves,” says Susan Anderson, owner of East Branch Ginger. And it isn’t something customers see often, if at all. 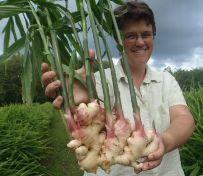 Baby ginger is quite different from regular store-bought mature ginger for both customers and growers. Mature ginger has a very tough hide and is very potent whereas baby ginger is very tender; people can simply chop and use it without having to peel through a tough skin and fibrous center. Growers should be aware that storage time after harvest is much shorter for baby ginger than it is for mature ginger, which can often last for months if stored properly. Baby ginger can be stored at room temperature for only about two to three weeks after harvest. Although this limits the market season for baby ginger, it also means competition for the crop is small; the crop cannot be shipped from overseas. 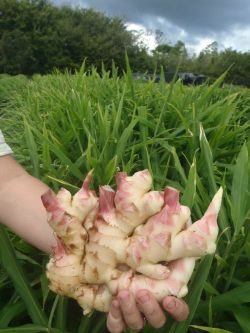 Harvest goals drive seed quantities; deciding what you hope to harvest will determine how much seed you’ll need to order.  According to Anderson, if you are looking for 160 pounds of harvestable baby ginger, you will need to order and plant about 20 pounds of seed. Although farmers can attempt to save their own seed from season to season, they risk replanting diseased seed to grow next year’s baby ginger crop. For many farmers, it may be more cost effective to invest in new certified organic ginger seed than attempt to save their own seed for replanting. Saving seed comes with the financial burden of keeping the soil above 50 degrees F during the off season in addition to the risk of passing along disease to the next season’s crop, making it unsaleable. “Buying clean ginger seed is like buying an insurance policy,” says Anderson.

Once the seed ginger you ordered has arrived, it is extremely important to open the box. Seed ginger needs to breathe and be pre-sprouted almost immediately. The goal is to get the rhizome out of dormancy and start the budding process. You’ll need to sustain temperatures between 70 and 80 degrees F for pre-sprouting. Since baby ginger is grown in tropical climates, you’ll want to mimic the soil and temperatures in which they usually grow.

Seed ginger should be placed in the ground in a field, high tunnel or greenhouse, anywhere from late February to early April, depending on climate. The soil needs to stay at a minimum temperature of 50 degrees F for proper development and should be tested every morning before the sun gets to it. You can plant approximately 25-30 pounds of baby ginger seed per 100 feet of soil and can also grow it in container culture. If you plan to plant your ginger in a container, you must have the capacity to hill the crop. The container also has to be very well-draining and the soil mix should not be actively decomposing. Ginger is an extremely hungry crop, and a soil test is essential to ensure the plants are getting enough nutrients. Anderson recommends gypsum to help ginger take up nutrients without altering soil pH. 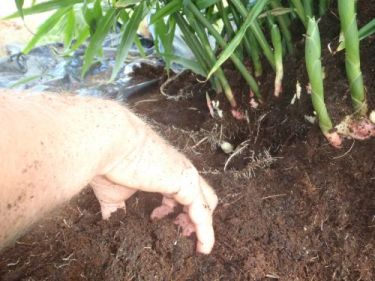 Ginger needs to be hilled three times a year, starting with the first hilling when the base of the stems turns from bright white to vivid pink. You may need to dig down in the soil a half inch or so to see the color change. The second hilling should occur four to six weeks later, and the final hilling should occur a few weeks after that. Each time the plant is hilled, 4- to 6-inches of growing media should be added and it should be fed with a balanced certified organic fertilizer. Consistent watering is also necessary for baby ginger seed to yield high results; however, over-watering can slow rhizome growth.

Baby ginger is ready to harvest about four to six months after it has been planted, in late August or early September. If you wait any longer to harvest your crop, it will turn begin to mature past the baby ginger stage, although it will take a total of 11 months to reach full maturity. And, if the soil temperatures dip below 47-51 degrees F, you risk losing the crop entirely. Once harvested, baby ginger can be chopped, cubed, sliced and kept whole and frozen. Outside of the freezer, it will only store for about 2 weeks. 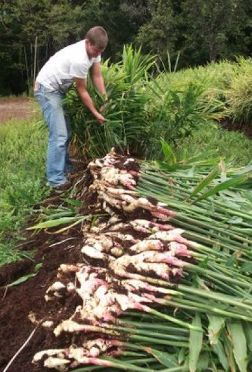 Once you become accustomed to the needs of the ginger plant, it essentially grows itself. There are few pests that affect ginger, but bacterial wilt and fusarium can become problems, especially if you’re trying to save seed from year to year. A crop infected with bacterial wilt shows signs of yellowing foliage and wilting plants. Symptoms of fusarium are yellowing foliage and, within a week or two of becoming infected, discoloration of the rhizome; it will acquire a beige/brown color.

The best way to avoid bacterial wilt and fusarium is to start each year with organic, certified disease-free seed ginger, but spores could already be present in your soil. Adding beneficial bacteria and fungi to your soil or growing medium will not only combat these diseases but also boost yield. Anderson recommends products such as Actinovate (Streptomyces lydicus) and RootShield (Trichoderma harzianum).

Educating consumers is the best way for farmers to market their new crop! Consumers and local chefs are mostly unfamiliar with baby ginger as a culinary ingredient, so pre-educating them before the season starts is key to getting them interested in future purchases. During harvest time, it’s important to educate the public on using and storing the baby ginger that they purchase. To reduce sticker shock for your customers, it is best to pick a per-pound price and break the baby ginger into smaller pieces to sell by the ounce. In addition to selling baby ginger as whole rhizomes, you can also market a number of value-added products, including pickled and candied ginger.

After a small learning curve, baby ginger can become an easy-to-manage crop in your rotation, providing a boost in sales in early fall, creating demand, and drawing in a new customer base.

The image featured at the top of this article is from Tree Gate Farm.