A guest blog post by Caroline Hampton, a first year farmer based in North Carolina

By the middle of October, it’s really starting to feel like fall. I am excited for cooler weather and the end of the season, and my body is too. No matter how many hours of sleep I get each night or what time I go to bed, I find my body unwilling to rise in the morning. Fall crops are in the ground and growing well, and our hogs are growing larger and fattening up, preparing to be slaughtered in November.

My previous experience in farming has been focused on vegetable production, though I have done some dairy work with cows, and have used grazing beef cattle in a field rotation. I have lived with backyard chickens several times, but nothing really prepared me for my experience of raising pigs this season. At the F.I.G. Farm, we decided to raise pigs together. Initially, we wanted to raise one pig to be the main course for a fall farm dinner, and when the opportunity to buy feeder pigs came up, the three other farmers at the F.I.G. Farm decided that they would like to each have their own pig to raise for sale and personal use. Because it was my first season as a farmer, I felt that the commitment of raising a pig would be too much work for me to take on. I declined to get my own pig. However, within a month of the pigs coming to the farm, I found myself serving as the primary caretaker for a herd of four pigs.

The experience of raising four pigs as a new farmer unexperienced with livestock has been entertaining, emotionally trying, and incredibly enriching. Fortunately, the incubator farm where I am renting space has an ideal setup for raising pigs. It has all of the equipment needed, like the push posts and polywire needed for the construction of our electric fence, a generator for our electric fence, troughs for eating, a waterer, and even a training pen for the piglets to initially go into.

When we first got our young 20 pound pigs, or shoats, they were very frightened of humans and would always run away when approached. I, in turn, was similarly shy and hesitant around them. I was unsure of how to approach them, not wishing to frighten them with my eagerness. Over time, they came to understand that a person carrying a bucket into their pen meant that food had arrived, and they would clamber around and into their trough to scarf down the choicest bits first. Being able to physically interact with and handle the pigs with confidence and ease is important for bringing food into the pen, entering the pen to move equipment, moving the pigs from pen to pen, and ultimately, making the pigs cooperate when we load them onto a truck to bring them to the slaughterhouse.

Being able to handle the pigs meant spending time in the pen with them while they were eating after they first arrived, as their desperate zeal for food was all that could coax them into my vicinity. Now our pigs are nearing 200 pounds and recognize the sound of my truck. When I am walking out to the field to feed them, they will begin a raucous chorus of grunts (and from one pig, high pitched squeals). They will often sound off even when I am not coming to feed them to express their displeasure. For a long time, I worried that we weren’t feeding the pigs enough because of the way they continually begged for food, but like children, they know the sounds and behaviors that motivate their caretakers to hand over some chow.

Throughout the season, I have had mentorship from our local livestock agent from the Agricultural Extension in Watauga County, as well as from other farmers in the community. I have consulted with farmers in person and over the phone, attended workshops, and had others come out to our property for advice about our space. I have learned a lot about what to feed pigs, how much to feed them, and how to effectively rotate them through pastures. 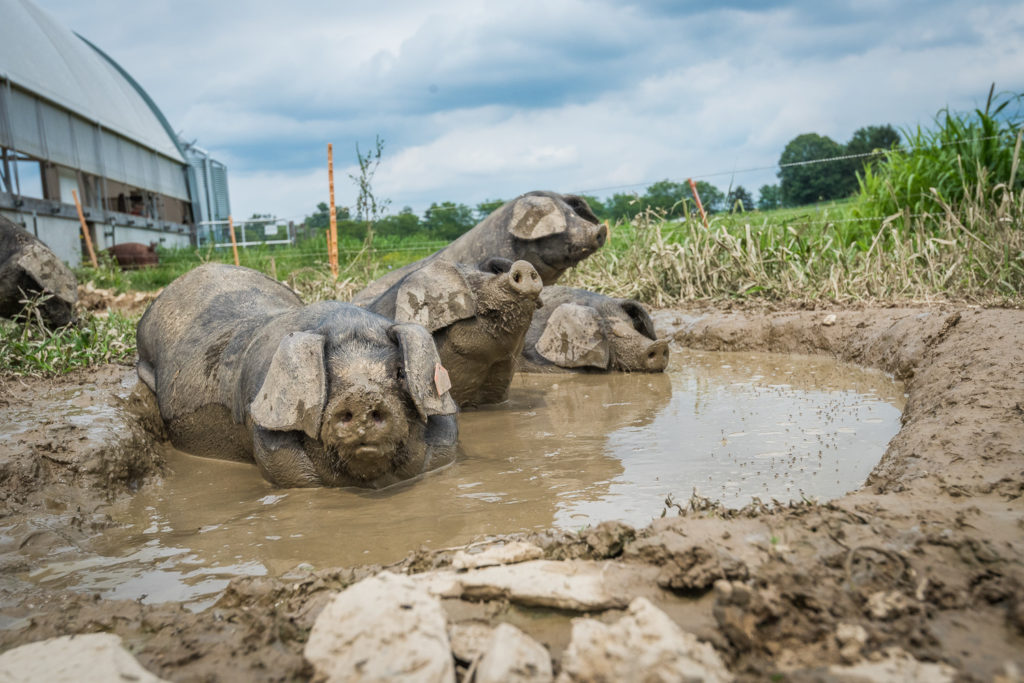 Our pigs are being raised in a large pasture that we have divided into six separate segments, and we let them root and graze an area quite heavily before moving them into the next segment. The smartest thing to do after moving the pigs is to sow seeds of various forage crops in the previously used segment so that as the pigs continue to rotate, they will have a feast waiting for them. This season, we did not manage to follow our rotation by sowing forage crops, but I will include this in my management plan next year. I plan to raise four pigs with a friend on his property next year. These pigs will be raised for sale at the farmer’s market.

Twice a day, we feed our pigs a diet of food scraps from the kitchens of local restaurants and grocery stores, as well as spent grain from a local brewery. We often cannot acquire the spent grain, so to ensure that our pigs are getting enough protein, we feed them a pelleted pig feed produced by a North Carolina company and sold at our local feed store. Pigs need a high protein (usually around 16%) feed daily, and the amount of food provided should weigh 3 – 5% of the pig’s body weight. Making sure our pigs have had enough food has certainly been the biggest struggle over the course of the season and has forced us to become more creative about food sources than we originally anticipated.

Our pigs are smart and entertaining, and I find joy interacting with them. They are curious and playful animals, and they approach anything new to their pen with interest, although they principally want to know whether they can eat it or not. In November, we will be sending some of our pigs to the slaughterhouse so the other farmers can sell the meat. We ultimately decided not to have a farm dinner this fall, so the pig that we raised to be our group pig became mine for the hard work that I have put in with our herd this year.

Because I plan to use the meat personally and not to sell it, I do not have to send my pig to the slaughterhouse, and I am very seriously considering killing it myself. Many of my mentors have been able to offer insights into and aid with the personal slaughter of a pig. In my mind, it is the most honest and reverent way to end the life of a pig that you have had a personal relationship with. The quality of the meat will also be at its best, since transport to and time spent at the slaughterhouse cause stress on the pig, and their bodily cortisol levels rise, compromising the quality of the flavor to some extent. I am looking forward to sharing my personal experience of slaughter, and I am anticipating some truly wonderful pasture raised pork!