Potato ranks as the fourth top crop contributing to the world’s food security, next to wheat, corn, and rice [1]. According to 2019 FAOSTAT, 388 million metric tons of potatoes were produced worldwide on 19 million hectares of land [2]. In the U.S. potato is grown on about 1 million acres with a value of $4.6 billion. In Pennsylvania (PA), potatoes are produced on over 5,300 acres, annually providing a market value of $18 million.

Potato is an important source of minerals such as potassium, phosphorus, and magnesium [3] as well as carbohydrates, proteins, and vitamins B, C and E [4,5]. Potatoes contain several phytochemicals such as polyphenols, flavonoids, polyamines, and carotenoids, which are proven to have human health benefits.

Polyphenols, naturally occurring organic compounds found largely in fruits, vegetables, cereals, and beverages [6], have become an emerging field of interest for nutritionists and consumers in recent decades. They are a large group of phytochemicals, known for their antioxidant, anti-inflammatory, and anti-microbial properties. Research has shown that regular consumption of foods rich in polyphenols decreases the risk of chronic diseases such as heart disease, certain cancers, type 2 diabetes, and neurodegenerative diseases [7].

The health-related properties of potatoes stimulate the search for potato cultivars and cropping strategies that can increase the content of phenolic compounds.

In this article, we are reporting total polyphenols (TP) in Lehigh and Purple Majesty potato cultivars grown in the Vegetable Systems Trial (VST) at Rodale Institute, PA, under organic (ORG) and conventional (CNV) cropping systems with two management practices in 2019 and 2020. Lehigh potato cultivar has tan skin color and pale to yellow flesh color whereas the Purple Majesty potato cultivar has purple skin and flesh. The management practices included a) chisel plowing referred to as reduced tillage (RT), and b) moldboard plowing covered with black plastic mulch referred to as intensive tillage (BP).

At harvest, potato cultivars were sampled from each treatment and assessed for yield and nutrient quality. Ground freeze-dried potato samples were assessed for TP at Dr. Reddivari’s Lab, Purdue University. Total polyphenol concentration was determined using the modified Folin-Ciocalteu colorimetric method [13]. The total phenols were evaluated in all tubers and expressed as mg gallic acid equivalents /g of dry weight (mg GAE/g of DW).

Our results showed that TPs did not change with management practices (BP or RT) averaging 3.2 mg GAE/g DW in 2019 and 2.4 mg GAE/g DW in 2020. However, potato cultivars differed in TPs concentration (Figure 1). Total phenol concentrations were 2 to 3 times greater in Purple Majesty than in Lehigh in 2020 and 2019, respectively. These findings corroborate with Lewis et al [9] who documented phenolic compounds can be 3 to 4 times greater in purple- or red-flesh potato cultivars when compared to white-fleshed cultivars. 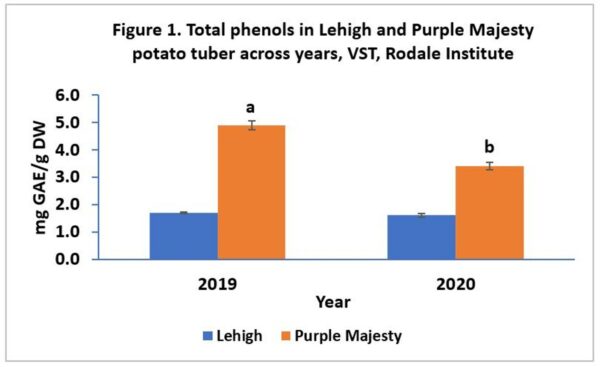 Moreover, year to year variations in TPs was observed only in Purple Majesty, averaging 2.5 mg GAE/g in 2020 and 3.2 mg GAE/g in 2019. Our findings also agree with the findings of Brazinskiene et al. [14] who showed that phenolic compounds in potato tubers significantly vary from year to year and among cultivars. 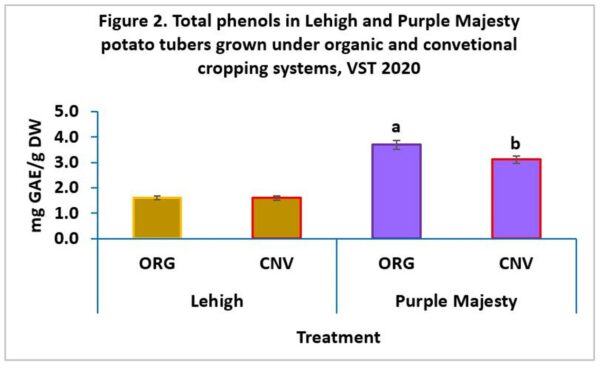 In contrast to Brazinskiene et al. [14], who found that the farming system had no significant effect on phenolic acids, our results showed that certain potato cultivars can be more sensitive than others and may vary in TPs concentration with cropping systems as in the case of Purple Majesty.

In summary, our two-year data showed that total phenols varied in potato cultivars. Lehigh potato, pale-yellow flesh cultivar, had a lower total phenol concentration than Purple Majesty (purple-colored flesh cultivar). Tillage did not have any significant impact on TPs concentration of potato cultivars. Purple Majesty exhibited greater polyphenol content in organic vs. conventional system in one out of two experiment years while TPs of Lehigh potato was not affected by cropping system. Our results corroborate with other researchers who documented that purple-flesh potato cultivars have greater polyphenols than white-fleshed cultivars [9], which vary by farming systems [10], and year [14].

Potato growers in Pennsylvania and other locations may benefit economically by investing in growing colored flesh potato cultivars that are rich in polyphenols, in addition to those commonly produced, white and pale-yellow cultivars. Similarly, consumers may enhance their health benefits by consuming potatoes rich in polyphenols, such as Purple Majesty.

Funding for work was made possible by the U.S. Department of Agriculture’s (USDA) Agricultural Marketing Service through grant AM180180XXXXG020. Its contents are solely the responsibility of the authors and do not necessarily represent the official views of the USDA.” Published on November 10, 2021.