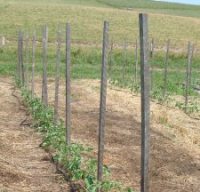 At Meadow View Farm in Kutztown, PA, James Weaver and his son Harold Weaver dread cleaning up the (more than) 20 linear miles of black plastic that they use every year. When they do finish cleaning up all of the plastic under their peppers, tomatoes, eggplants, and cucurbits, they face the headache of disposing the plastic. Black plastic disposal is an expensive challenge depending on your location and whether you’re recycling, land-filling, or burning. Furthermore, Harold notes that by the time it’s cleaned up, it’s always too late to get a cover crop in. These frustrations motivated the Weavers and other vegetable farmers and researchers at Rodale Institute to experiment with rolled and crimped cover crop mulches to reduce their reliance on black plastic.

Organic Cover Crop Mulches. For more than a decade, researchers at Rodale Institute (RI) have been working with others at Penn State and the USDA’s Sustainable Agriculture Systems Lab in Beltsville, MD, to develop a system for producing corn and soybean grain crops organically without spring tillage. Researchers first honed in on a few annual winter cover crops, such as cereal rye and hairy vetch, that can be killed when they bloom in the spring. However, they quickly became frustrated by how quickly weeds broke through the mowed or chopped residue, so they worked to develop the roller-crimper. The roller-crimper not only terminates the cover crops by flattening and crushing them, but it also leaves them in an intact mat that is better able to suppress weeds throughout the season. 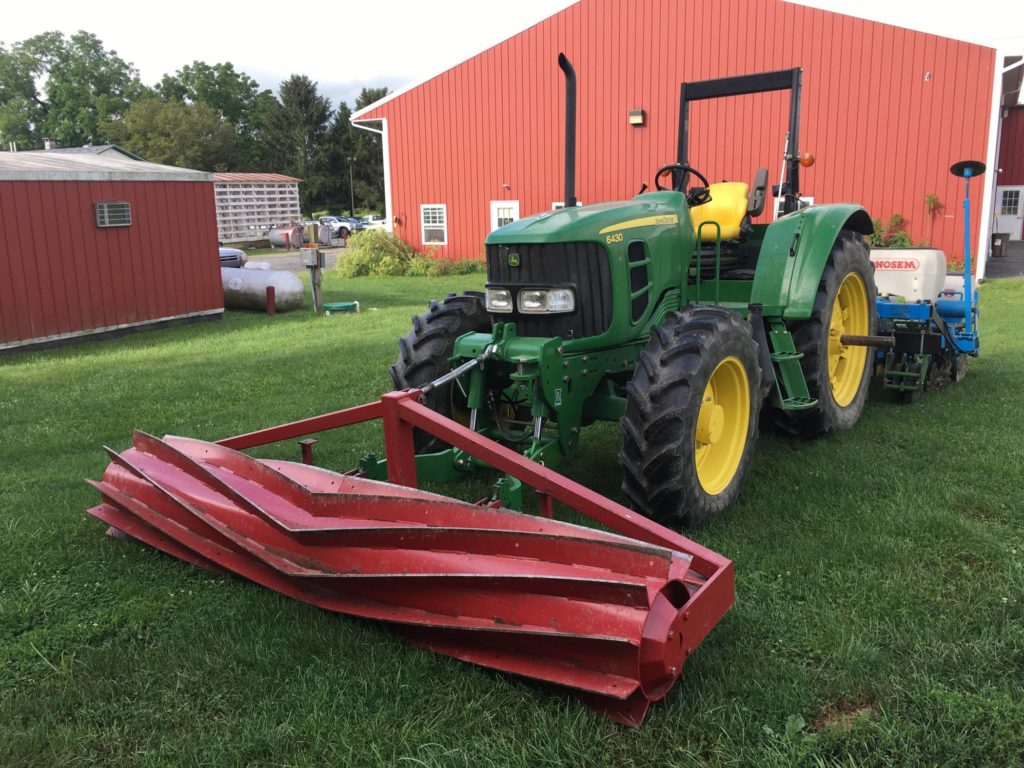 An Organic Cover Crop Mulch System for Vegetables. In 2009, RI researchers attempted to combine the knowledge gained from the rolled/crimped system for grain crops with knowledge from the ARS vegetable research to develop an organic cover crop mulch system for vegetables. Researchers selected 3 cover crop options: cereal rye for its superior weed suppression capacity, hairy vetch for its superior nitrogen fixing capacity, and a mixture of both vetch and rye to try to create a mulch that provided both sufficient nitrogen and weed suppression. Opting for the heavier seeding rates used in organic no-till grain production and the earlier planting dates (8 weeks before first frost) advised for cover crops used for vegetable mulches, researchers hoped to grow thick, dense cover crop stands that prevented summer annual weed germination in the spring and provided sufficient soil cover to continue suppressing them during the summer. To maximize the persistence of the cover crop mulch, RI researchers also opted to compare rolling and crimping the cover crops with the mowing method used by the USDA researchers. 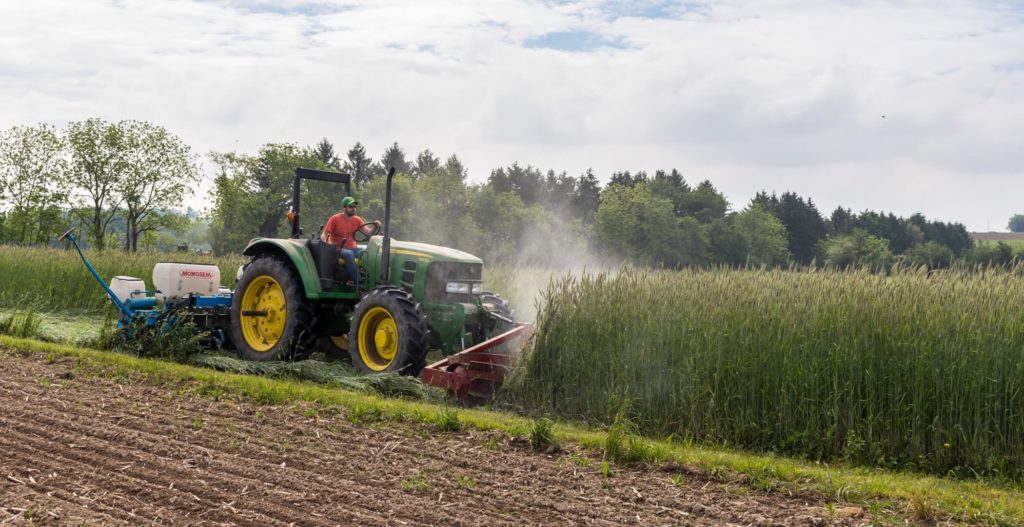 Treatments in the Trial. As the combinations of cover crops, planting dates, cover crop termination methods, and crops are practically limitless, researchers elected to do a systems-type experiment to compare a couple of practical systems vegetable farmers could use to produce tomatoes:

Researchers measured how well each system performed in terms of fertility, weed suppression, and yield. The first year of research showed that the mowed vetch-and-rye mix mulch produced the highest yields, provided the most weed suppression, and provided just the right amount of nitrogen for tomato production. Researchers are now in the midst of a second year of repeated field trials to expand the dataset and test the validity of the findings in a different growing season.

Nitrogen from hairy vetch. Hairy vetch is a great source of nitrogen. As a nitrogen-fixing legume, hairy vetch has a higher density of nitrogen in its tissue (about 4.5% nitrogen in this study) than other cover crops. Hairy vetch can also produce a tremendous amount of cover, usually between 4000 and 8000 lbs/acre by early June. In 2010, hairy vetch grew rather poorly – only 3000-4400 lbs/acre, but it still contained about 150-200 lbs of nitrogen. The nitrogen in cover crops with C:N ratios of 20:1 or less is highly available; microbes will make 50% or more of the nitrogen available to the crop over a summer growing season. In regards to vetch, with a very low C:N ratio of only 9:1 or 10:1, about 75 lbs of nitrogen was probably available to the subsequent tomatoes (both in vetch mulch and in plastic mulch), well more than the tomatoes’ needs of about 50 lb/acre of nitrogen.

Nitrogen from cereal rye. Cereal rye is only a little over 1% nitrogen and has a high C:N ratio of 40:1 or 45:1, making it a relatively poor source of nitrogen fertility. It is a prolific producer of biomass, however, providing 9,000-11,000 lbs of mulch per acre. So even though the nitrogen in cereal rye is not very concentrated, rye mulch still contains 100-125 lbs of nitrogen per acre. About a quarter of that nitrogen, or 20-30 lbs per acre, was probably available to the subsequent tomatoes, meeting about half of their nitrogen needs. Cereal rye is mature by mid-May, so no additional biomass or nitrogen is gained by waiting until June to roll it. 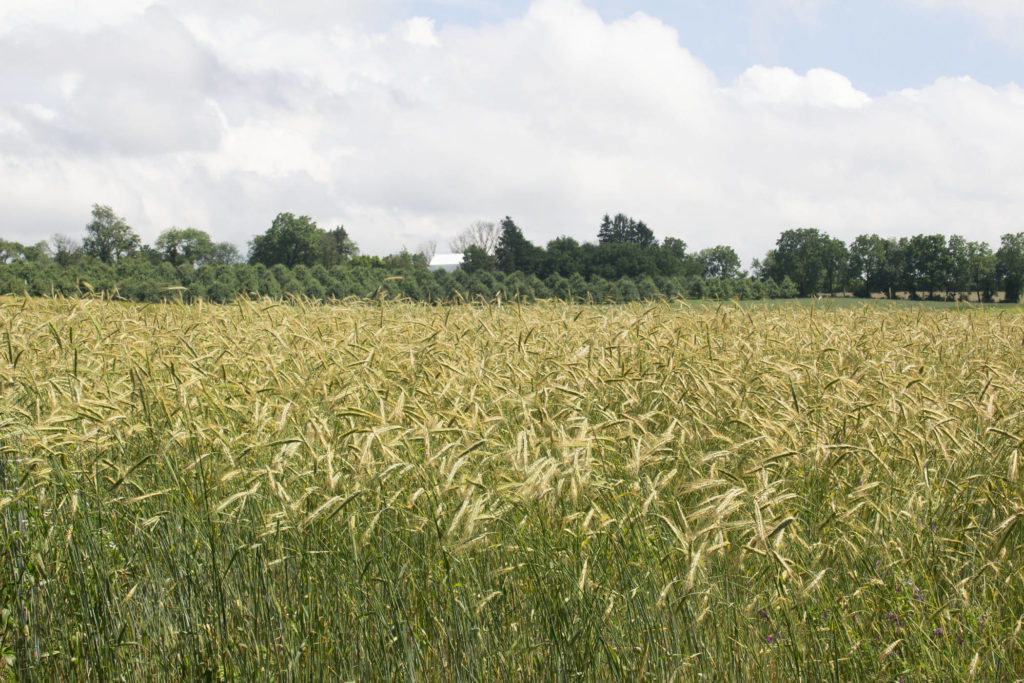 Nitrogen from the vetch/rye mixture. The difference between the mixture in mid-May and the mixture in mid-June was tremendous. In mid-May, the mixture was still mostly rye – only 7% vetch and 93% rye. However, by mid-May the vetch had largely overtaken the rye, and the mixture was about 30% vetch and 70% rye. Not surprisingly, the vetch and rye mix mulch had an intermediate C:N ratio of about 23:1. Only 1/3 to ¼ of the nitrogen in cover crops with slightly higher C:N ratios (between 20:1 and 40:1) will be available to the season’s crops; as such, this rye-vetch mixture likely yielded about 50-60 lbs of nitrogen per acre, probably a sufficient supply for tomatoes. However, since some early season nitrogen immobilization was possible, researchers applied a quarter rate of Fertrell 4-1-1 (about 10 lbs N/A) at planting to ward off transplant shock and support healthy, productive plants.

Vetch Nitrogen less costly than Supplemental Fertilizer. Even with the thin vetch stands in both years, the vetch still provided about 50-100 lbs of available nitrogen. Supplemental fertilization required in the rye mulches was 8 times more expensive than the cost of the vetch system.

Mowing versus Rolling. Solid soil cover and uniform mulch distribution are also important factors in achieving adequate weed suppression. Flail mowing can be an effective strategy for improving mulch uniformity and soil cover. However, the maceration of cover crop tissue caused by mowing can accelerate mulch decomposition relative to rolled cover crop mulches, potentially leaving crops in mowed mulch systems vulnerable to late season weed pressure. In the vetch-alone treatment, flail mowing improved the uniformity of the mulch distribution, initially improving weed suppression. Although by 8 weeks after tomato transplanting, it appeared that the mowed mulch had decomposed more quickly than its rolled counterpart, and both mowed and rolled treatments were similarly weedy. That said, early weed suppression is more important than late weed suppression for crop productivity. The greater early weed suppression and possibly higher nitrogen availability due to greater mulch decomposition in the mowed vetch mulch supported 44% higher yields than the rolled vetch mulch. Conversely, in the rye/vetch treatments, the mowed mulch suppressed more weeds than the rolled mulch both 4 weeks and 8 weeks after planting, with less than half as many weeds in the mowed treatment as in the rolled treatment at both sampling dates. 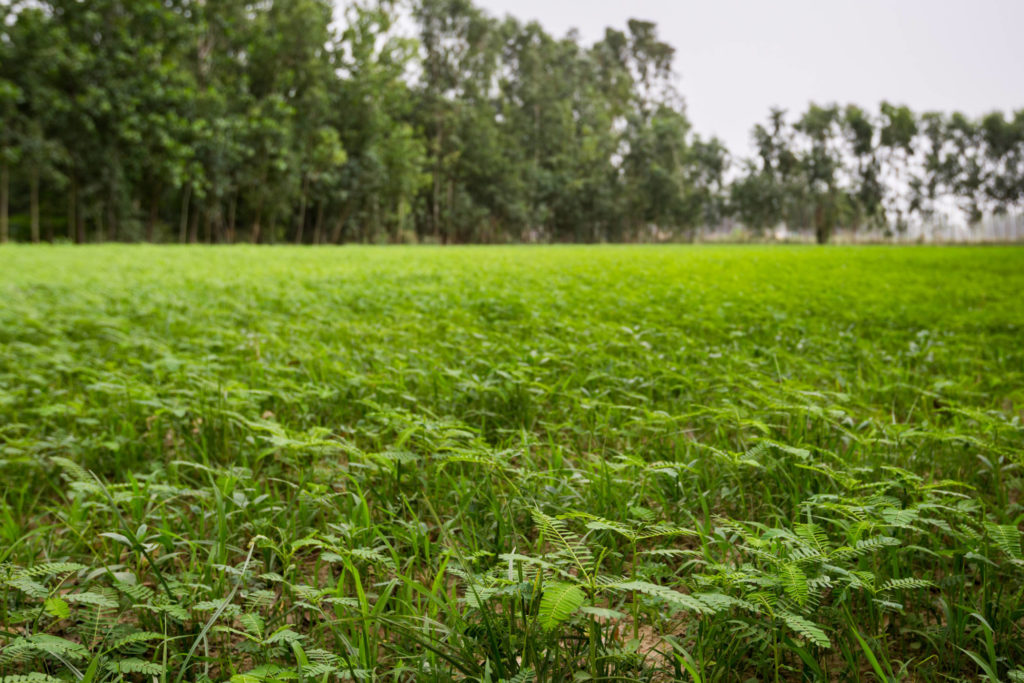 Rye-Vetch versus Rye Alone. Mixing vetch, a vine-y plant, with rye appeared to knit the mulch together, providing improvements in mulch uniformity and soil cover similar to those provided by mowing versus rolling. The mowed rye-vetch was the least weedy (less than 400 lbs of weeds per acre). Mowed rye mulch, rolled rye-vetch, and rolled rye all suppressed weeds about as well as black plastic, with about 1000 lbs of weeds per acre in each of those mulches by August. The aisle-ways between black plastic plots required weed whacking, however, which wasn’t necessary in the cover crop mulches. In comparison, the mowed vetch and rolled vetch mulches were both the weediest by August with about 3000 lbs of weeds per acre. 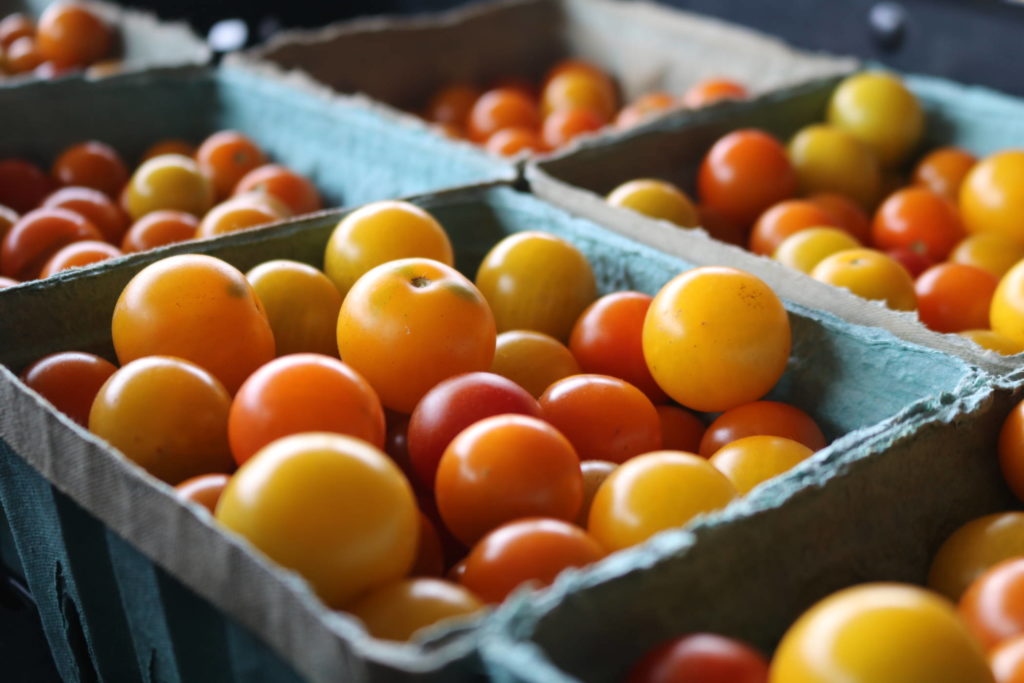 John Good, one of the farmers partnering in the research, was especially pleased with the performance of the rye vetch mulch so far, although he noted a few challenges. The first challenge was hand transplanting. He and his crew struggled to hand transplant Waltham butternuts into the rye-vetch mulch on June 14, about 10 days after rolling/crimping the 6’ tall rye-vetch. Good explained that to hand transplant into the soil under the mulch, the soil needed to have some moisture—either recent rain or some drip irrigation. Otherwise, it could be like trying to hack into concrete with a hand trowel. Good’s second concern was the variability in the rye-vetch. While one of his strips had been dominated by vetch, another was dominated by rye; at 4 weeks after transplanting, Good’s squash showed the difference. The butternuts in the vetch-dominated strip were larger and greener than those in the rye-dominated strip.

Harold Weaver, who farms Meadow View Farm in Kutztown with his father James Weaver, shared his early impressions of the rye-vetch mulch system. Having planted a large 4 acre field in the cover crop mixture last fall, the Weavers initially planned to roll and crimp just a small section of the field with a new raised bed roller-crimper designed and built by I&J Manufacturing in Gap, PA. As the wet weather wore on this spring, however the field did not dry out enough for Harold or James to get into it until mid-May, when the rye-vetch was already more than 6’ tall. Rather than try to mow and till in their extra-large cover crop, Harold and James opted to roll and crimp most of the field with a 10’ straight roller and direct seed pumpkins into flat ground in late May. While they got good control of the rye with that first pass, the vetch continued to grow. Just prior to pumpkin emergence, Harold followed up with another pass with their new 3-part I&J roller-crimper, which provided excellent control of the vetch. Harold noted that he felt the 3-part roller actually provided better control than the straight roller because the 3-part roller is better at covering the divots and hummocks that characterize their hilly farm. So far, Harold and James are very happy with the cover crop mulch system, which they’re using to grow late heirloom tomatoes (planted mid-June) and fall cabbages on raised beds, along with the pumpkins on flat ground. 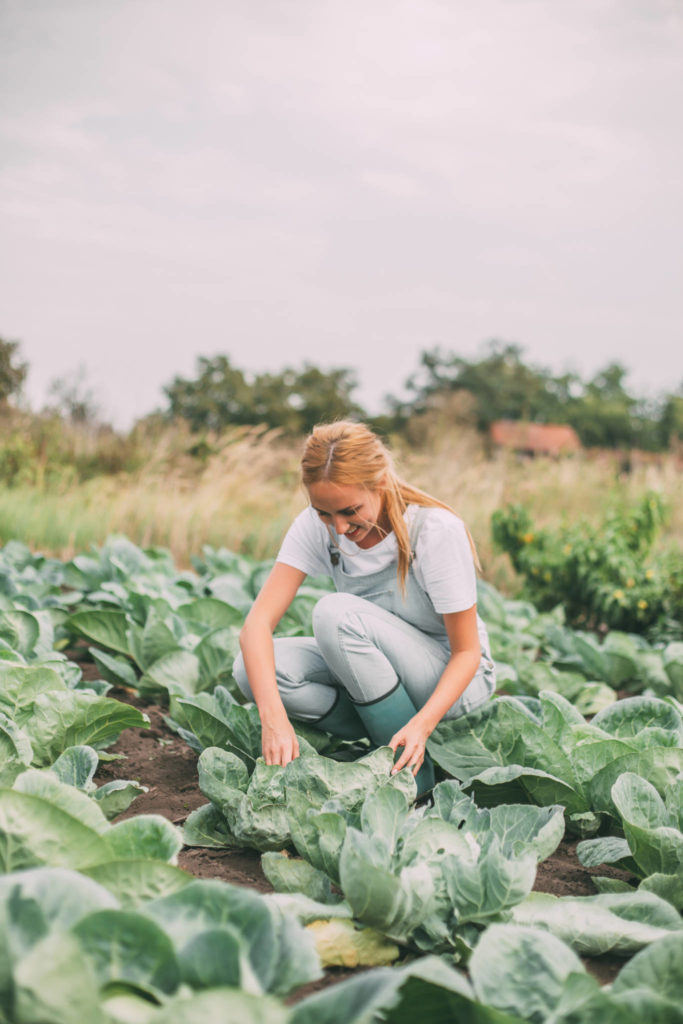 What we know so far

So far, the mowed rye-vetch mulch has emerged as the best performing system with the highest yields, fewest weeds, and best match between nitrogen provided nitrogen needed. The rolled rye-vetch was a close runner-up, and it was the only other cover crop mulch to out-perform black plastic. Rolled or mowed rye is a nice alternative to black plastic, but the system does require about $800/acre of supplemental organic fertilizer. $800/acre is likely a similar cost to the black plastic system, as the costs for bed prep, black plastic, labor, fuel for twice-monthly weed whacking, and black plastic disposal can quickly approach the cost of fertilizer for tomatoes in rye mulch. The vetch mulch systems were poor performers in terms of weeds and yields. However, in terms of nitrogen fertility, plowing in even a thin stand of vetch and using black plastic supports high early and overall tomato yields and sufficient weed suppression. For growers looking to escape from black plastic, or even just decrease their use of the stuff, cover crop mulches are a promising alternative.

This material is based upon work supported by Northeast SARE, under Subaward LNE 10-295.

Alison Grantham is working towards a dual PhD in Ecology and Biogeochemistry in the Crop and Soil Sciences Department at Penn State. Her research is exploring ecosystem efficiency differences between agricultural systems across a range from fully integrated crop and livestock systems to disparate grain and livestock production. Prior to returning to school, Alison served the Rodale Institute as research intern, research and policy associate, research manager, and ultimately the interim director of research. In her spare time, Alison is an avid organic community gardener.