For tips and information on establishing insectary strips, click here.

To learn how to monitor insect populations on your own farm, click here.

This research, conducted at Rodale Institute from 2015-2018, analyzed use of flowering insectary strips to combat populations of the striped cucumber beetle, which damage cucumber fruits and transmit bacterial wilt disease. We also investigated use of the roller crimper to reduce weeds in organic systems without tillage or black plastic. The research and results are outlined below.

Striped cucumber beetle (SCB) (Acalymma vittatum) is a serious pest of cucurbit crops in eastern North America. The SCB larvae feed on roots and stems while adult beetles feed on and defoliate cucurbit plant leaves, flowers and fruits; interfere with pollination and fruit set; and cause scars on cucurbit fruits that impact marketability.

Striped cucumber beetles overwinter as adults in protected sites in wooded areas or within the field under old crop debris. When temperatures exceed 55 °F (12.7 °C) in spring, striped cucumber beetles emerge from overwintering sites and feed on the pollen of wild flowering plants. Once cucurbit crops are transplanted into the field, the SCB migrate to plants and aggregate to feed and mate. Ten to 20 days after mating, the beetles lay eggs in the soil at the base of cucurbit plants, which hatch a week later. Larvae take 2 to 4 weeks to mature, and then pupate in the soil over the next 7 days. The adults continue to move from one field to another.

In Pennsylvania, later in the summer the adults emerge and feed on flowers, foliage or on the surface of cucurbit fruits. The second generation of SCB will eventually leave the fields to feed on pollen and overwinter until next spring.

The Pathogen and the Disease

The SCB is also considered the principle vector of Erwinia tracheiphila, the causal agent (bacterium pathogen) of bacterial wilt of Cucurbitaceae. But the feeding and scarring damage is minimal compared to losses due to bacterial wilt. Bacterial wilt disease is characterized initially by rapid wilting of plants foliage and eventually the collapse of the whole plant, especially those exhibiting cucumber beetle injury. Cucumber and muskmelon are highly susceptible to bacterial wilt with yield losses of up to 80% reported, while squash and pumpkin are moderately susceptible.

The bacterium that causes the wilt overwinters in the gut of some of the striped cucumber beetles. In spring the adults begin feeding and spread the bacterium either through their feces or from contaminated mouth parts. Lesions from chewing damage on plant leaves open entry points for the pathogen to be quickly transmitted and multiply through the plant’s vascular system, affecting water movement in the water conducting vessels and consequently, producing blockages that cause the leaves and the entire vine to wilt and die. The infected beetles continue to infect new healthy plants with the bacterium causing wilt as they move from one plant or field to another.

Organic cucurbit growers use an array of pest management strategies to maintain striped cucumber beetle populations below economic thresholds (1 SCB/plant). These strategies include:

Each of the listed approaches has advantages and disadvantages and none of these tactics help in minimizing the feeding injuries, beetle populations, and/or transmission of bacteria.

The exclusion of young plants by row covers may prevent SCB adults from feeding on cucurbit plant foliage in early spring, but the practice increases weed growth and weeding costs, and prevents pollinators and other “beneficial insects’ access to plants.”

Similarly, if systemic neonicotinoids are applied closer to ﬂowering of cucurbit plants, research studies have presented evidence that higher residues of these chemicals are present in pollen and nectar which become harmful to vegetable crop pollinators such as honey bees.

None of these approaches provide a long-term effect and sustainable, environmentally-friendly ecosystem to reduce SCB damage and improve productivity of organic cucurbit crops.

Because striped cucumber beetles are attacked by many natural enemies, one effective approach is to target the pest itself through its natural biological agents. To do so, it is important to protect natural enemies from disturbances such as pesticides and tillage by establishing and maintaining permanent landscape habitats. With time, such habitats will enhance the performance and increase populations of natural enemies that are used as biological control against SCB.

The goal of this project was to assess the impact of integrating insectary strips and reduced tillage on striped cucumber beetle pest density and beneficial insect populations, as well as on fruit production and quality of organic cucumbers.

Insectary strips, each 5-ft wide by 30-ft long, were established in fall 2015 with alfalfa as a base plant and oats as a nursing crop. A suite of plants such as bouquet dill, sacred basil, resin calendula, alyssum, lemon balm, fava bean, peas, and sunflower was transplanted throughout April and May of 2016 and 2017. Insectary strips were placed every 25 feet of cucumber beds. Plants without insectary strips were also included in these trials.

Two cover crop mixtures were tested in this project: a rye/hairy vetch (R/HV) and a rye/field pea (R/FP) mixture. These mixtures were planted in fall 2015 and 2016. In spring of 2016 and 2017 the biomass of these mixtures were either rolled-crimped with a roller-crimper or tilled-in and covered later with plastic mulch.

Cucumber plants of the ‘Ministro’ variety were first started in the greenhouse and transplanted into tilled plastic mulch beds using a water wheeler transplanter or no-till transplanter on roller-crimped mulches without using any additional fertilizers.

After transplanting the cucumber seedlings in plastic and rolled mulch, floating row covers were installed to protect the young seedlings from any attack by early visitors of adult striped cucumber beetles. The row covers were removed approximately one month after transplanting (when cucumber flowers started to bloom) to allow pollinators and beneficial insects to reach the plants.

Monitoring of pests and beneficial insects started immediately after the removal of row covers. Yellow sticky traps and pitfall traps were installed in the middle of the insectary strip and in the middle of each cucumber bed (each bed has 17 cucumber plants). Striped cucumber beetle pest and beneficial insects such as ladybeetle, parasitoids, and minute bug were monitored periodically. No organic pesticides were used during these field trials. Yellow sticky traps were monitored on a weekly basis whereas the ground beetles were monitored every two weeks. 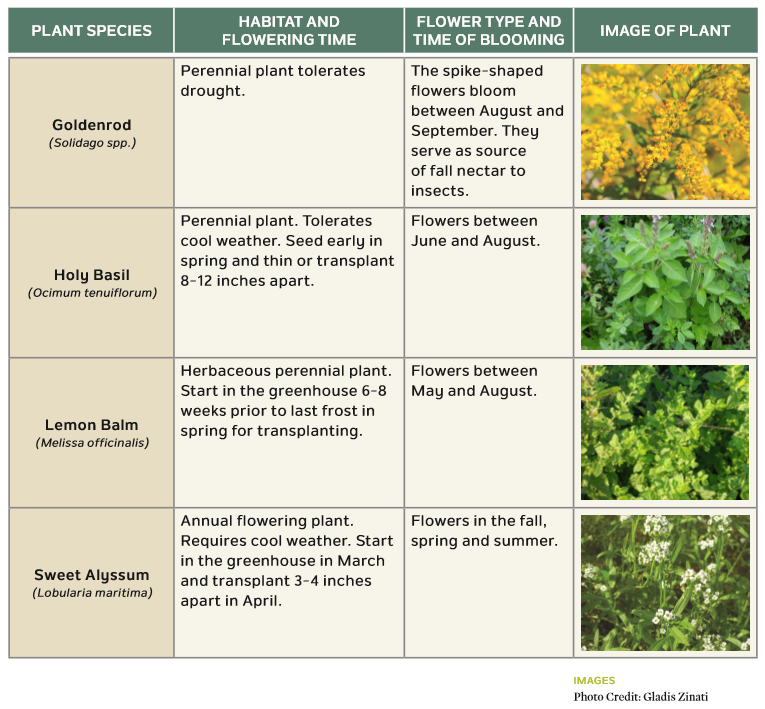 For tips and information on establishing insectary strips, click here.

To learn how to monitor insect populations on your own farm, click here.