Weeds can be defined as plants growing out of place and can rapidly populate in ecosystems that do not support their natural enemies. Many methods are being used to keep weeds under control. These include burning them, pulling them out or chopping them down, and treating them with herbicides.

What is Biological Control of Weeds?

Plants are labeled “weeds” when their natural enemies become ineffective or are nonexistent. In nature, plants are controlled biologically by naturally occurring organisms. Biological control of weeds involves using biological agents that include living organisms, such as insects, nematodes, bacteria, or fungi, to reduce weed populations. By introducing biological control agents, we are attempting to restore or enhance nature’s systems.

How to Introduce Biological Control Agents

Using compost as soil mulch (4 to 6 inch (10 to 15 cm)) can be most effective in weed suppression. However, composts may vary in their chemical and biological components based on method of preparation and feedstock components. In addition, applications of composts at these quantities can be expensive. As a weed management method, chemically–and biologically–designed compost extracts offer an environmentally friendly biological control approach that complements conventional methods. It helps meet the need for new weed management strategies while protecting soil health. These application of compost extracts that are rich with biological agents on an annual basis will reduce the expression of weeds by reducing the number of weed seeds stored in the soil.

How to Design Compost Extract for Reducing Weed Expression

Not all composts are created equally, neither are their extract preparations deemed to be containing the biological control agents that target specific weeds. Organic growers, whether they grow vegetables, herbs, berries or native crops, are constantly challenged with weeds that grow at a faster rate than their cash crops. These weeds include a pigweed, lambsquarters, hairy galinsoga, and Canadian thistle. 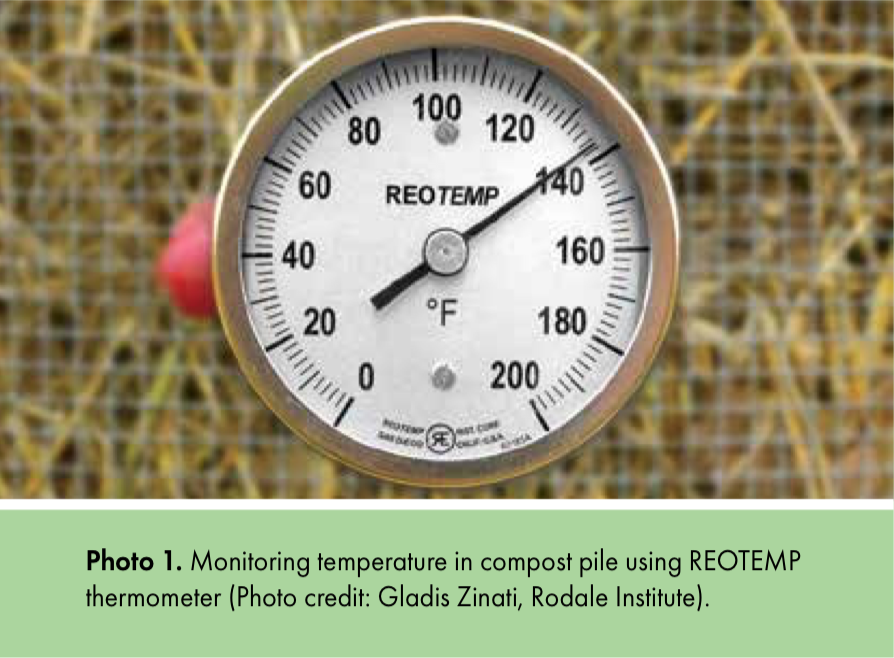 The piles were turned four times as temperatures increased beyond 131°F (55 °C) and below 170 °F (76.6 °C). Cured compost piles were then used to prepare compost extracts by bubbling air into containers that contained compost with deionized water at several dilutions for 24 hours before being tested on weed and crop seeds under controlled conditions.

Compost extracts were prepared at 1:2, 1:3, 1:4, 1:5, 1:10, and 1:20 dilutions. Ten seeds per weed species were placed in petri dishes and tested at each dilution in three replications in an incubator at 24°C. Percentages of weed seed germination were assessed five days after initiation of the experiments. Cucumber seeds were used as a model cash crop in these experiments as well.

What Did the Research Show?

Results showed that compost piles while having similar feedstocks their chemical and biological distribution is dictated by the ratio of these feedstocks (table 1).

Only compost extracts with dilutions at 1:3 (compost to water (volume to volume)) were most effective in reducing pigweed weed seed germination under controlled conditions. Compost extract prepared from C1 pile reduced germination of pigweed by 20 percent compared to deionized water at p=0.0032.

Similarly, percentage of lambsquarter seed germination was lower in C1 and C2 compost extracts (52 percent, and 57 percent, respectively) but not statistically different from deionized water (65 percent). At the 1:3 dilution, cucumber seeds were not affected as those incubated in 1:2 dilutions (showed severe reduction in root elongation). Results also showed that both C1 and C2 at 1:3 dilutions improved significantly at p= 0.018 cucumber seed germination (100 percent and 87 percent, respectively) when compared to deionized water (43 percent). While these results verified a proof of concept of using chemically-and biologically- designed compost extracts to reduce the expression of weeds, it was necessary to take this concept one step further and assess its usefulness under field conditions.

A follow up field trial was conducted in spring 2016 to assess whether the applications of compost extract C1 at 1:3 dilutions will be useful to suppress the expression of weeds when compared to soil cultivation (standard grower’s treatment).

When compost extracts were applied on plots dedicated to compost treatments, the grower’s standard plots were treated with water. The lands was previously cropped to cereal rye cover crop. The soil was cultivated, disked and packed two weeks before planting cabbage. Cabbage ‘Tender Sweet’ seedlings were established in the greenhouse in March 2016. Four-leaf stage seedlings were transplanted into two-row beds, spaced 30 inches (76 cm) between rows and 18 inches (46 cm) spacing within rows on April 19, 2016, five days after bed preparation. Cabbage transplants were covered with row covers for a month. At harvest, cabbage heads were cut at the crown level and yield was recorded. 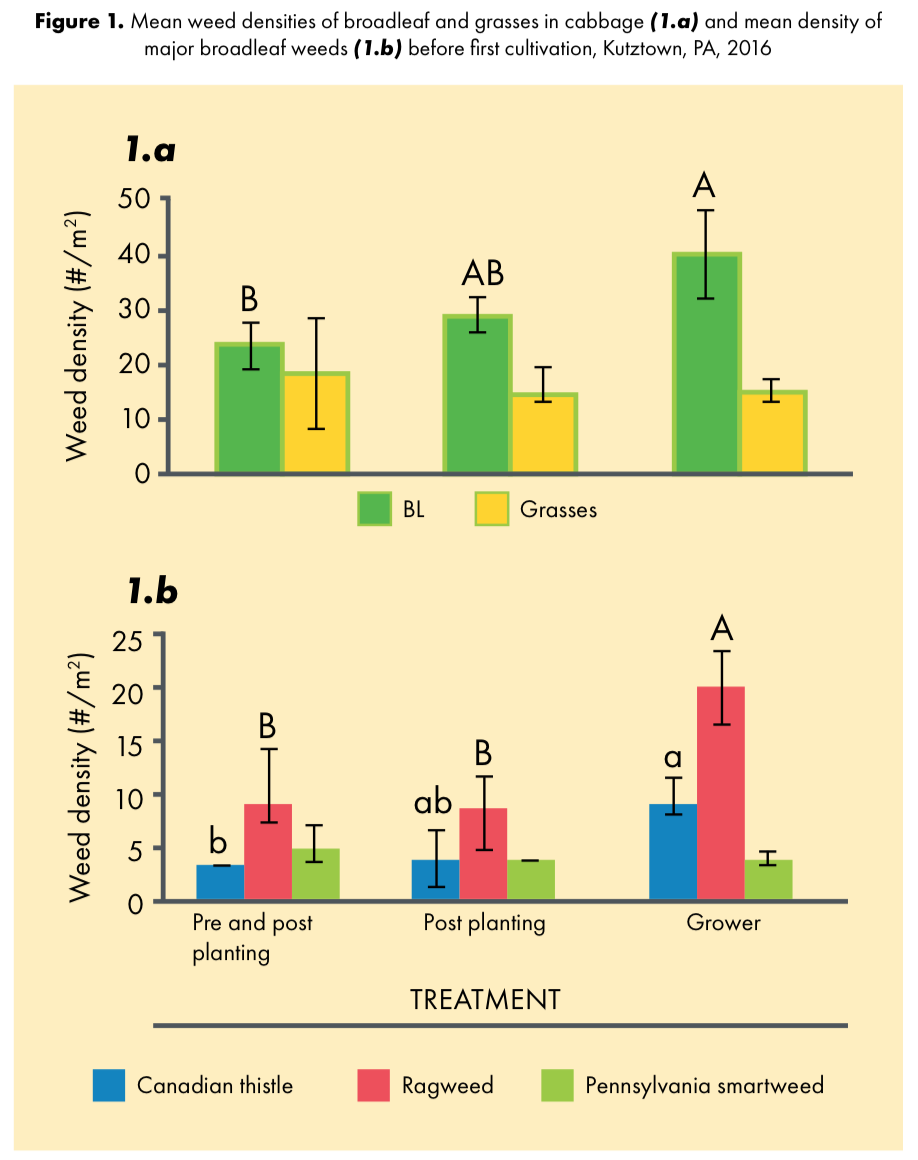 A month after the first observation and before the second cultivation, broadleaf weed densities were assessed in each treatment. On June 13, 2016, Canadian thistle, ragweed, velvet leaf and pennycress were the major weeds. Canadian thistle and velvet weed densities were reduced by 93 percent and 73 percent, respectively in plots that received the designed compost extract C1 applications when compared to those in grower’s treatment (Figure 2). These designed compost extract C1 did not reduce seed weed expression and growth of ragweed and pennycress weeds.

Cabbage yield was greater in treatments that received pre- and post- compost extract applications, followed by those with post-planting application and significantly different from those produced in grower’s standard treatment (Figure 3).

Bars with same letters are not statistically different p=0.05.

In summary, the technology of and using compost extracts with applying chemically-and biologically- designed compost extracts at 1:3 dilutions during the vegetable growing season can serve as an alternative tactic to cultivation and hand weeding and as a potential biological method for suppressing weed expression without impacting crop yields. Weeds vary in time of emergence, and thus multiple applications will be required throughout the growing season to ensure suppression of weed seeds.

Designing and using compost extracts with chemistry and biology in mind, growers can now conserve soil health, minimize crop losses to certain weeds (such as Canadian thistle and velvet leaf), and with time, build soil capacity with diverse microorganisms and phytochemicals.

This technology is safe for applicators and consumers. Future research work will expand on identifying the biological communities and learn which major bacterial and fungal organisms are playing the role of suppressing weed germination. In addition, more research is needed to evaluate and validate the use of compost extracts with varying feedstock components for suppression of other annual and perennial broadleaf weeds.

This material is based upon work supported by Frontier Natural Products Cooperative, a Northeast SARE Partnership Grant, under Grant Agreement Number ONE 16-278, and by Organic Farming Research Foundation (OFRF).

This article first appeared in the March/April 2018 issue of Progressive Crop Consultant’s Magazine.

Gladis Zinati, Ph.D. is the associate scientist and director of the Vegetable Systems Trial at Rodale Institute.