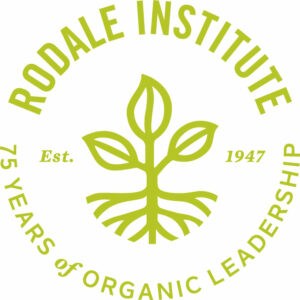 Rodale Institute is turning 75! Help us celebrate the rich history of organic agriculture and the future of the regenerative organic movement this fall by joining in our “Why Organic” social media campaign.

Farmers, consumers, activists, environmentalists, and organic fans everywhere are joining us to celebrate the past, present, and future of organic agriculture.

Hear from our Rodale Institute Farmer Training (RIFT) interns on why they believe in organic agriculture.

The Regenerative Organic Alliance is honored to be one of the incredible projects Rodale Institute has created through their work building the #RegenerativeOrganic movement over these past 75 years through solutions-based research, farmer training & consumer education. As their founder J. J. Rodale has famously stated: "Healthy soil = healthy food = healthy people."

Join us in celebrating Rodale Institute's 75th anniversary by commenting what excites you about regenerative organic agriculture below!👏

In honor of its 75th anniversary, the rodaleinstitute is asking folks to share why they choose organic goods or practices.

There are so many reasons we choose to farm organically, but at the root of them all is HEALTH. Organic practices support the health of every living thing in an ecosystem - from the microorganisms in the soil, to the plant life and wildlife around us, our farm animals, staff, family, and every person in our community near and far.

Our organic practices inform not just our business and who we are as farmers, but also who we are as parents, neighbors, educators, consumers, and everything in between.

Now it’s your turn. Why does choosing organic matter to you?

Here's why we support organic! rodaleinstitute It's all about leaving a decent earth for the next generation!🌎

At age 75, the Rodale Institute continues to grow the organic movement through groundbreaking research, farmer training, and education.

Today we are celebrating 75 years of rodaleinstitute and the Regenerative Organic movement! ❤️🌎

We are honored to support the incredible efforts and steps rodaleinstitute has taken toward a Regenerative Organic future these past 75 years, because healthy soil = healthy food = healthy people.

🌱 In 2020 alongside support from Rodale, we proudly participated in their first round of pilot farms for regenerativeorganic certification.

Through championing Regenerative Organic practices, we’re continuing to push our core mission: to leave the Earth better than we found it. Join us in celebrating rodaleinstitute's 75th anniversary! 👏

Record a short video of yourself sharing why you believe in organic agriculture.

Post your video on any social media platform using the hashtag #MyWhyOrganic.

Make sure to tag @rodaleinstitute and nominate a friend you want to participate!

Why is organic agriculture important to you? Why do you farm organically? Why do you buy organic products? Where do you want to see this movement go in the future?

Learn more about the importance of organic agriculture here:

In 1947, J.I. Rodale founded the Soil and Health Foundation, later to be renamed Rodale Institute. From the very beginning, he knew that farming practices focused on cultivating healthy soil would lead to healthier foods, and ultimately, healthier people too.

In those early days, J.I. Rodale’s family farm in Emmaus, Pennsylvania was the site of the Institute’s first organic research trials and demonstration projects. In the 1970’s, Rodale Institute moved to its current site in Kutztown, Pennsylvania which is now home to renowned research projects such as the Farming Systems Trial and the Vegetable Systems Trial, as well as our farmer training programs.

Read More About Our Story

Questions About the Campaign?

If you have any questions about the campaign and how you can participate, contact David.Pryor@RodaleInstitute.org.

How Can I Make a Difference?